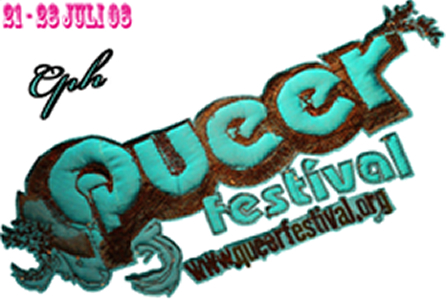 The new Copenhagen Queer Festival 08 is taking place 22nd to 27th July. In 2006 the first Queer Festival took place in Copenhagen and this year it comes for the third time. For a week artists, musicians, DJs, performers, social and political activists, drag kings, drag queens, and gender benders from many countries will get together and create an alternative to heteronormative culture, politics, and spaces.

The festival is for anyone who takes interest in criticizing and transgressing the prevalent norms governing gender roles and sexual identity. So the festival is a space not only for familiar minorities such as gay men, lesbians, and transsexuals, but everyone who dislikes the rigid division into sexual identities and the categories man and woman. There is no fee for participating. For guests from outside Copenhagen Queer Festival provides a place to sleep at the festival venue and food to eat (free or inexpensive) for all activists.

The main principles of the festival is DIY (do-it-yourself) and non-profit . The queer festival wants to create a space where we can/will unfold and explore queer culture, politics and activism. This means that everybody are actively responsible to the festival and are expected to participate in an active manner. No one will be excluded from activities on the festival because of lack of money. Everybody contributes as they can – practically as well as economically. 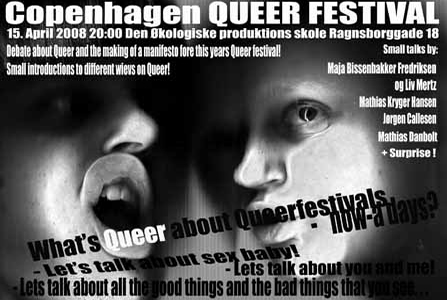 welcoming party with the danceable tunes of ScreamClub (Can) and NickyClick (US), making the opening concert.

big party of the festival

open DJ-deck. Everyone can bring his favourite music and use half an hour making all dance.

Already planned are workshops about Racism on the Left-wing and in the Queerscene, Queering the Sports, Asexuality, Politics around Prostituion and Sex Workers, The Fight for Free Spaces, Self-defence and Learning to DJ/VJ.

Since DIY is a basic principle of the festival, people can bring ideas for workshops, skill-sharing and other interesting stuff. People are invited to do workshops about: Preparations and Considerations around Sex Spaces, Bisexuality, Conflict Resolution Skill Sharing and a Sound & Light Crew.