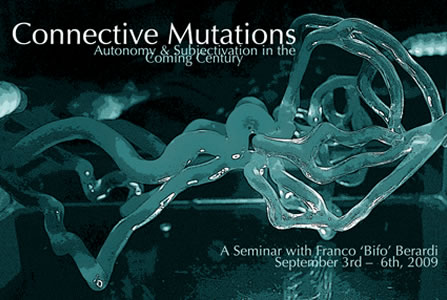 The work of Felix Guattari and Gilles Deleuze changes the frame of this discussion, proposing the concept of subjectivation, or becoming-subject, as a framework to understand the multiple becomings and states of social
encounters. This concept of subjectivation overlaps significantly with the concept of class recomposition developed in the 1960s and 70s by autonomist thinkers such as Sergio Bologna, Mario Tronti and Toni Negri.

Both strains of thought focus on how forms of social antagonism and resistance give rise to new social positions and possibilities for collective becomings.

Today we find ourselves in a transformed condition, one created by techno-anthropological and connective mutations, marked by overwhelming flows of immaterial labor and information flows that threaten to exceed the limits of the body. Cyberspace may be infinite, but cybertime is not. This intensification and expansion of technological dynamics and automatisms makes problematic the very possibility of collective subjectivation. Have we reached a stated where the immersive flows of information, affect, and desire act to dampen or even preempt the emergence of new collective subjects?

This seminar builds upon the format of the “Continental Drift” seminars that Brian Holmes and 16 Beaver have conducted during the past several years. It will thus mix together presentations and discussions with Bifo along with interventions and dialogues with other invited contributors and collectives. 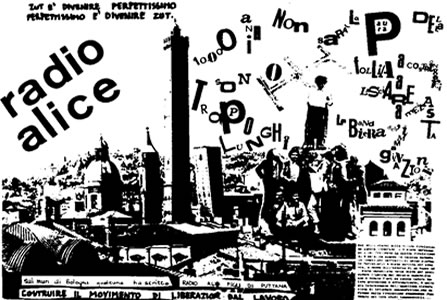 Franco ‘Bifo’ Berardi is a writer, media-theorist and media-activist. He founded the magazine A/traverso (1975-1981) and was part of the staff of Radio Alice, the first free pirate radio station in Italy (1976-1978). He is author of numerous books, including Precarious Rhapsody, Ethereal Shadows: Communications and Power in Contemporary Italy, The Panther and the Rhizome, Politics of Mutation, Philosophy and Politics in the Twilight of Modernity, and The Factory of Unhappiness. He is currently collaborating on the magazine DeriveApprodi as well as teaching social history of communication at the Accademia di belle Arti in Milan.

“Autonomy is not a fixed, essential state. Like gender, autonomy is created through its performance, by doing/becoming; it is a political practice. To become autonomous is to refuse authoritarian and compulsory cultures of separation and hierarchy through embodied practices of welcoming difference… Becoming autonomous is a political position for it thwarts the exclusions of proprietary knowledge and jealous hoarding of resources, and replaces the social and economic hierarchies on which these depend with a politics of skill exchange, welcome, and collaboration. Freely sharing these with others creates a common wealth of knowledge and power that subverts the domination and hegemony of the master’s rule.” – subRosa Collective. (http://www.autonomedia.org ;http://info.interactivist.net)