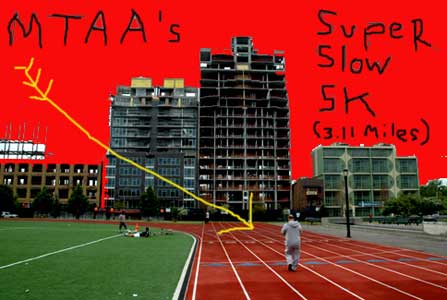 Conflux is the annual New York City festival where visual and sound artists, writers, urban adventurers and the public gather for four days to explore their urban environment.

Over the course of the festival the sidewalks are literally transformed into a mobile laboratory for creative action as people from a wide variety of backgrounds and cultures collectively re-imagine the city as a playground, a space for positive change and an opportunity for civic engagement. Conflux is both produced and attended by city residents who share a common desire to understand, explore, sustain and ultimately improve the urban experience.

From architects to skateboarders, Conflux participants have an enthusiasm for the city that’s contagious. Conflux visitors are introduced to the ways cutting-edge artists with diverse points of view address topics ranging from environmental damage, real estate development, and the privatization of public space to emerging techno-social behavior in cities, the development of creative DIY initiatives and playful efforts to humanize cities by encouraging dialogue amongst communities.

Now in its fourth run, the Conflux festival has grown to include over 100 artists from across the US, as well as Australia, Canada, Japan and many European countries who have been selected by a team of nine professionally-recognized curators as representative of the most innovative work being produced in the fields of public-space arts and contemporary psychogeography, the exploration of the physical and psychological landscape of cities.

Second Life Walkie Talkie Walks, a simultaneous walking tour for Second Life avatars and real people, connected to each other using a pair of walkie talkies.

The Relay, a musical relay race with thirteen improvising musicians separated into three trios, each trio in a different venue.

The Next American City magazine-hosted event where visitors will collectively create a visual story exploring the future of America’s cities; held at McCaig-Welles Gallery and in conjunction with the Williamsburg Gallery Association’s Fall Preview event on Friday, September 14th.