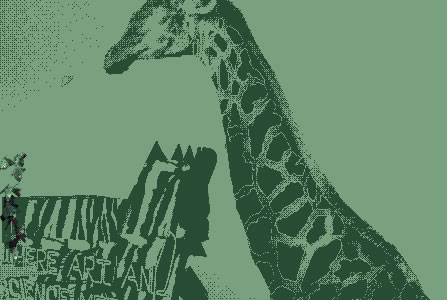 Exhibition : Code Zebra is a collaborative project led by Sara Diamond. CodeZebra draws upon debates about the relationship between art and science, the behaviors and characteristics of the inhabitants of those disciplines to create a series of provocations. CodeZebra includes spoken word and dance performances, club nights, games, workshops, and software development. In 2003 Diamond locked up pairs of artists and scientists in Habituation Cages for 24-hour periods and asked to discover new inventions, art works and concepts while real time video streams, documentary footage and online chats captured their every move. Such events and processes are captured in DVD form and on the CodeZebra website and are the core of this exhibition. CodeZebra OS software uses data visualization to provide analysis of dialogue and conversation taking place on the Internet. Responsive garments and costumes of CodeZebra bring communication, display and social camouflage back to the body.

Panel discussion : This panel of artists, scientists and curators considers the ways that current questions of space/time have opened new parameters in scientific research, visualization, popular culture and art and curatorial practice. The panellists will discuss their discoveries and reflect on the ways that art and science provides new insights into the operations of space and time whether at the universal or human scale.

Sara Diamond is an artist and researcher.  She will frame the panel discussion and discuss her own work. In 2003 CodeZebra included a series of twenty-four hour Habituation Cages in which artists and scientists were locked up together and asked to invent new processes or products.  Over the twenty-four hours time became a malleable medium, raising questions about linear, parallel and simultaneous forms of time and space, although constrained, became limitless.