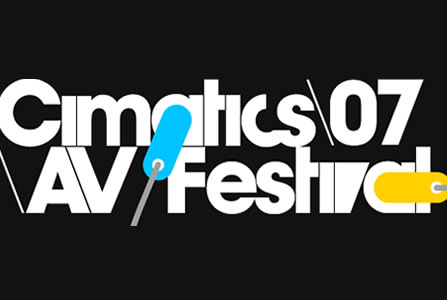 Cimatics focuses on audiovisual performances crossing borders; joining art, music and pop culture into one big audiovisual feast. At the AV Club, dj/vj-sets are intertwined with audiovisual concerts, performances and short screening of experimental videos. The festival aims to be a Happening. Its ambitions reflect on contemporary audiovisual culture, not only by taking a distance but also by being the Gordian Knot in these connecting art forms. In that sense, the festival mashes up the different concepts of presentation and exhibition. The festival takes place from November 22nd to 24th, with the Beursschouwburg as its central meeting point.

Whilst the core of the festival is to be found at Beursschouwburg, Cimatics again links up with several venues and partners throughout the city center. The AV City-program presents audiovisual installations in public space. These installations have one thing in common: they can be switched ‘on’ and from there on; they function as a performance rather than an installation.

The first installation, the festival pre-opener, is the result of the collaboration of German collectives U-matic, Télématique and LFT: Adaptateur 6×6 . The serene light-game of this installation, in the tunnel next to Recyclart , shall be transformed into a pumping audiovisual concert with Errorsmith . The head start for a rollercoaster festival.

MediaRuimte takes part in the AV City program with concerts on the Dexia tower , the local skyscraper that turns into a led-powered screen at night, a contemporary urban lighthouse. Experience stand-alone work and concerts by Lab[au] , Limiteazero , Holger Lippmann and Olaf Bender from the Rogier-square, or try spotting it from any given point in the city as a nightly game of hide and seek! Those who prefer the more personal, indoor approach will find Tobias Grewenigs installation at the Kartell store, right next to the Beursschouwburg a welcome alternative. You’re invited for a hyper individual AV performance as you’re functioning as part of the installation: Emotions Defibrillator.

The AV Theatre program brings you audiovisual performances and concerts for a seated audience. Simultaneously in the ‘Beurskafee’, concerts, performances and screenings are presented within the experimental setting of a club, as exposition space: the AV Club.

Kicking off the first night at Beursschouwburg is Motek , a young Belgian band, with the premiere of their newly developed show: Do You Us Too v.2. Part two for that night is a concert by the world renowned Jaki Liebezeit , (yes, the drummer from the Krautrock pioneers CAN) and Burnt Friedman , the multi-talented musician on the Non-place label, in collaboration with the American visual artist Jeffers Egan .

At the AV Club that same night, there’s a Th!nconsolation label-night : lots of concerts and dj’s, with visuals by Antonin De Bemels and Nyx , and an AV-performance with the German duo Station Rose .

Friday is the most eccentric and experimental night in the AV theatre, with the Maschineraum performance by khmfn , taking you along on a mechanical, industrial audiovisual performance. Followed by the performance NotTheSameColor by Billy Roisz and dieb13 , previously presented at Tate Modern, deconstructing the audiovisual in a minimalist dialogue between image and sound, using analogue feedback. Scott Arford closes that night at the AV Theatre with his performance Static Room . Arford explores the edges of sensorial and physical experiences, with basic, rudimentary imagery.

That same night at the AV Club, the Italian Digicult-webzine curates the program. A night full of audiovisual performances, crossing borders between vj-ing and AV-performance. The evening starts with local Walter Verdin , presenting his newest DVD-box set Title Safe , with an AV performance that remixes the original Title Safe material.

Saturday, the AV Theatre opens with a live version of Synken , a film project co-produced by Cimatics and released through the Shitkatapult label. This film, a collaboration between Berlin based musician O.S.T. and the visual collective Transforma , is an audiovisual spectacular, narrative and experimental at the same time; the live version can only take it further.

After that, it’s the South African visual artist Kendell Geers and Front242 musician Patrick Codenys taking over for their performance as The fucKINGfucks . Those who saw Geers’ retrospective at SMAK, know they’re in for a defying spectacle.

As the closing concert, Cimatics is very proud to (again) present the absolute world class in Live AV: Ryoichi Kurokawa . This Japanese artist was already at previous editions, but for this fifth anniversary edition, we at Cimatics thought it only just to offer him a headline slot again. Kurokawa offers a spectacle that is yet to be equaled.

The AV Club on Saturday is completely devoted to the Stilll Label , offering a wide variety between contemporary classic and alternative pop, with concerts by the Swedish A Perfect Friend and the Belgians aMute and de Portables.

For those who also like to reflect on what’s happening in modern AV-culture, we like to point your attention to the conference , organized in collaboration with St.Lukas Brussels/Transmedia. It’s the second in a series of lectures, entitled The Cinematic Experience , that started a few weeks ago at Vooruit, Ghent. And finally, let’s not forget the exhibition and performances at MediaRuimte , a Cimatics partner since day one.