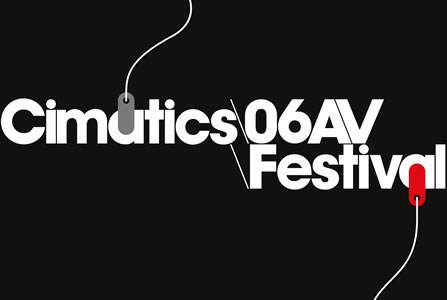 Cimatics is an international platform for Live Audiovisual Art & VJ’ing. The Cimatics AV Platform aims to promote innovative and outstanding productions in the field of audiovisual performance, vj’ing and interactive installations, as well as gathering recent artistic and technical developments in order to present it to a general public.

The platform presents productions that explore performance concepts and the interaction between different media formats in an innovative manner and view. It encourages the crossover of institutional, academic and sub cultural contexts as well as interdisciplinary work between art forms, media techniques and concepts.

Cimatics 06AV Festival brings you an extensive overview of what’s taking place at the crossroads of sound, image, media, design, cinema and performance art. Ignoring the borders of diverse disciplines, the festival combines sound and visuals, mixing art with pop into a celebration of audiovisual culture.

The approach to the festival idea has changed a lot: Instead of pushing everything into a well-packed festival week we’ve decided to focus on the specific aspects in separate periods and venues.

The groundbreaking, experimental, avant garde or yet-to-be-discovered-AV performances are to be found at MediaRuimte , For the educational factor of Cimatics we teamed up with Exceeda (UK) and PioneerProDJ at Pianofabriek to work on a weeklong master class where DJ’s can expand their knowledge incorporating visuals in a live set. The AV-performances , without any doubt the core business of the festival, are all concentrated at the Beursschouwburg during three consecutive days.

Although unintentionally, the opening night has an ‘all Belgian’ line up, with Arden , an impressive combination of Belgian musicians and designers, performing for the first time ever. Headliner that day Walter Verdin , teaming up with Roland and Lars Van Bambost and Urundi Airlines for the world premiere of ‘Title Safe3. The only non-Belgian item on Thursday night is probably the presentation of D-fuse’s boo k ‘A/V: VJ’ing + Audio-Visual Art’ giving an overview of the worlds VJ and AV scene.

On Friday at the Beursschouwburg, we pull out all registers for a maximum effect on your emotions, with an eclectic blend of internationally acclaimed artists like Murcof and the Leaf Label DJ’s or AV-pioneers The Light Surgeons going classical with the ‘Art of War’ music by The ‘T’ang quartet’. Headliner that day is Ryoichi Kurokawa , probably the strongest AV performance we’ve seen these last few years. There’s also a speckle of national pride with Boris and Brecht Debackere ‘s ‘Rotor’ and R.O.T.’s and Floris Van Hoof ‘s drone-improv and 16mm projection performance.

Saturday, the final night at the Beursschouwburg, goes fully international with The Kilimanjaro Dark Jazz Ensemble from the Netherlands, the German duo Incite/ and the British/Dutch/Italian cooperation between Scanner and TeZ . At the Video Club (BeursKafée) the French duo Gangpol und Mit redefine the term ‘Moving Wallpaper’ with an exciting cut’n paste game of sounds and visuals.

During these three days the AV lounge, between Video Club and Theatre, presents a selection of internationally acclaimed installations by the likes of Carsten Nicolai and Telcosystems and DVD presentations of ‘Title Safe 1, 2 & 3 ‘ (to be released soon through the Cimatics\AV\Platform) and the DVD that accompanies Dfuse’s ‘A/V: VJ’ing + Audio-Visual Art’-book.