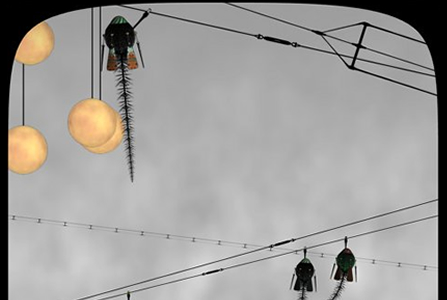 “You can persue your desire for slowing down your bustling everyday life in the new exhibition Chasing Stillness by boredomresearch. Discover the universe of the seldom songs of the whirligigs and observe the transmission of emails in real snail speed.” Susanne Massmann, [DAM]Berlin

Catch boredomresearchs‘ latest computational systems in their solo exhibition Chasing Stillness at [DAM]Berlin until the 24th October 2009. Their new artworks Lost Calls of Cloud Mountain Whirligigs have a cycle where it gradually shifts from daylight to nighttime. It is the first time boredomresearch have used lighting in a system which really affects the Whirligigs appearance and their environment.

At nighttime the lights have a moonlike quality and occasionally a Whirligig’s colours are electrified by the light. Slowly the lights move along the cables from the right to the left computational systems; lighting the colours of the Whirligigs propellers and nose cones.

Over the last couple of years boredomresearch have been learning Blender a 3D application. Creating 3D models and then exporting components of these models with different textures, then recompositing them within a 2D system. “Lost Calls of Cloud Mountain Whirligigs” is the first computational system they have created which uses this technique. The Whirligigs have a certain lifespan and when this ends a new generation of bots are created, compositing different textures on their propeller’s and nose cones.

With the majority of boredomresearchs’ other computational systems there is always movement from the Biome creatures who seem to be endlessly perpetual to the springtails in their Ornamental Bug Gardens which continually ping. In these new artworks boredomresearch are interested in there being moments of stillness, where the viewer has a sense of anticipation when watching the bots. 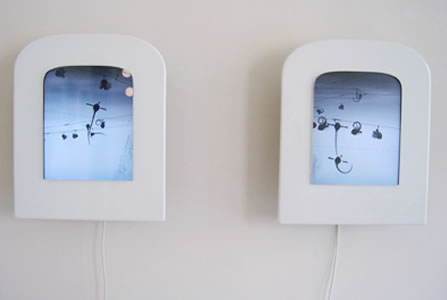 Each Whirligig has a unique song, occasionally they call out. Their environment seems like its out of reach with cables high above a mountain. When the Whirligigs perch on the high wires they seem lost and often restless and their melancholy calls feels like they searching in their abandoned world.

boredomresearch are also exhibiting an installation version of Real Snail Mail (the world’s first webmail service to use live snails) in the Chasing Stillness exhibition. Visit [DAM]Berlin to watch the six new Snail Agents (aka Ada, Fritz, Edith, Engelbert, Heinrich & Wolfgang) delivering emails at a snail’s pace….If you can’t make it to Berlin you can always follow the progress of the new additions at Real Snail Mail website