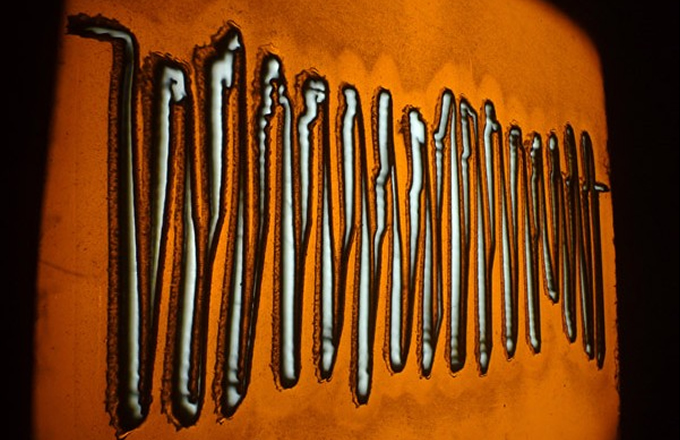 Last April 19th, 2012 at iMAL, the Center for Digital Cultures & Technologies in Brussels, the Gobo Gobo hey ! exhibition was inaugurated.

The installation of Cécile Babiole represents a variation on the theme of the gobo. What is a gobo? It is a technical term used in the light design field, to indicate a perforated metal surface, which allows light from a projector to pass through holes and thus to generate a luminous image.

In this case, the French artist uses Plexiglas gobos, whose holes are created with a laser, and the images that are generated through the holes are given by slide projectors. Not only light design, then. Starting from the action of light, sometimes violent (the laser itself creates holes in the Plexiglas, acting at different intensities, shaping but also deforming, crumbling or fusing) in the matter itself, then it comes to generating graphic image that semantically and graphically plays with the theme of sound, music and sound waves. 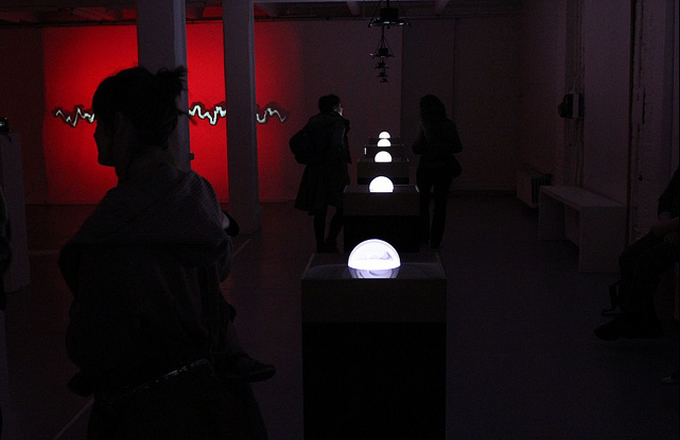 In such a way, in this work all the themes dear to Cécile Babiole are approached: the investigation into the formatting of images and sounds, their interaction as different codes, the action on the raw material, the creation of computer-generated images or multimedia environments, but especially the technological mutation between the analogical and the digital occurred during the 80s.

This is indeed one of the most interesting aspects of this installation: the research on the archaeology of digital practice, in such an action that involves primary and basic elements: matter, light and, through their interplay, the projected image and its temporal dimension.

Also in honour of the early career of the French artist, mainly oriented towards industrial music, the title Gobo Gobo hey ! is an indirect homage to 70s punk culture, and in particular to the Ramones’ rebel yell: Gaba Gaba Hey!  This aims also to emphasize the “violent” nature, in this case of the action of light upon the matter and its subsequent deformation and transfiguration. The work presented is a production of the Brussels’ IMAL centrer with the support of the French SCAM, and in collaboration with the ArtBrussels art fair simultaneously held in the Belgian capital on the same days of the inauguration. 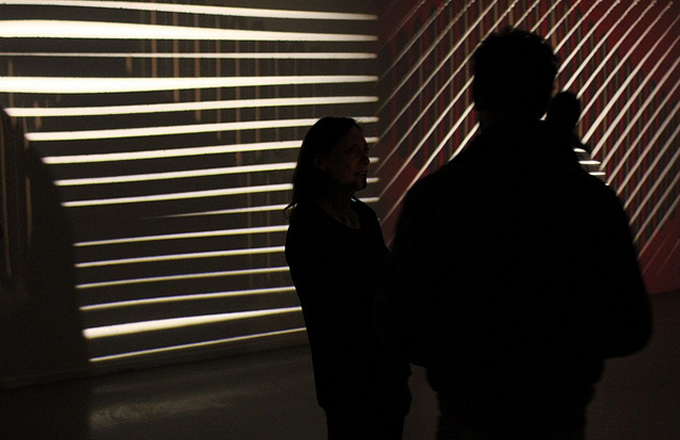 Cécile Babiole could be defined as a plastic artist, but she often approached multimedia creation and generative graphics, as well as transposition works of images and sounds, often in their interaction with the audience. Having started her career in the music field, the French artist let her interest for sounds permeate her graphic and visual activity, to translate the temporal (and hence sound) dimension of images.

Recently Cécile Babiole it is also interested in the 3D creations, because this type of three-dimensional animations allows to have a convergence between space and time, through the creation of a movement made up of duration and distance. Two dimensions that are also shown in Gobo Gobo Hey!

In this regard, the same exhibition exposes another of Cecilia’s works, Miniatures – Kits Sonora, 3D prints of musical instruments, where the reference to sound dimension is present again, albeit artistically less important.

Talking again about the iteration and the relationship between kinetic and generative image and rhythm, I would name 0,116 RPM, presented at the festival Ososphère in 2011, a sort of visual installation featuring images of wide landscapes (either urban and country) taken from different points of view, made played on two record-players. The idea is about a DJ that mixes and scratches one giant turntable. But not only. 0.0116 RPM follows a phonograph code. The image rotation is then accelerated in a way that makes it visible the rhythm and its dynamic size. 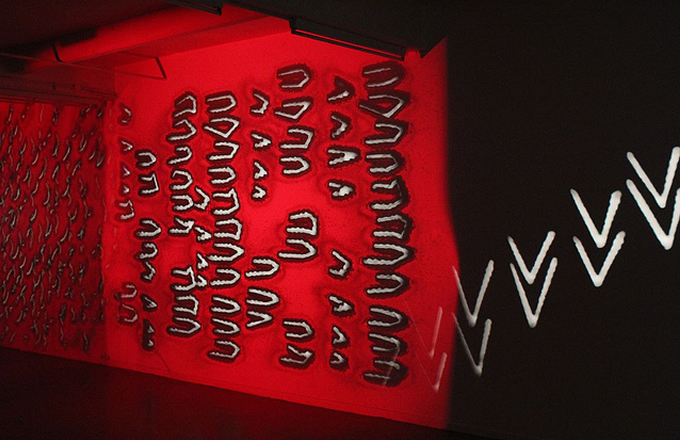 A final aspect of Cecile Babiole‘s works that is worth investigating is the iteration. For example, the work Circulez Y’a rien à voir of 2008 (transl. Come away, there is nothing to see) is specifically designed to be performed in public space and not in a gallery. This is an interactive system, which converts the movements of passers-by in graphic diagrams and sound modulations. The installation operates as a sort of radar that detects social behaviours and urban development in an external context, beyond standardized art sites with established aesthetic codes.

Perhaps French artists are a minority in the world of digital art, still it is interesting to note artworks like those of Cécile Babiole, (who has worked in various European cities); works looking at the origins of digital practice and at that fragile and defined boundary between analogical and digital, showing a first communication channel between them.