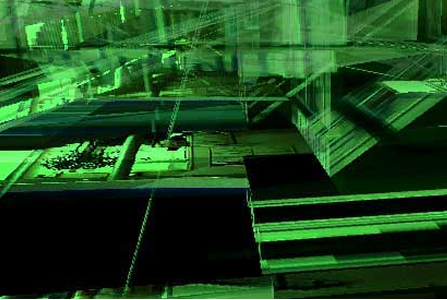 Digital Space is pleased to host Nullpointer’s ‘CCTEX’ installation. Following its debut at last year’s Seoul Biennale, this will be the first time the work has been shown in the UK.

The project is based on the expanding cultural practice of game modification and the increasing presence of cctv and mass observation technologies. In CCTEX a level from ‘Counter Strike’ (a popular counter-terrorism mod) is re-mapped to offer the user an warped experience of covert surveillance.

The environment that the user experiences is coated in imagery drawn from a set of webcams that are positioned strategically around the installation space. Streaming video of the audience and gallery space are translated into textures that paint the modified game architecture. The textures are manipulated during this process to create a semi-abstract reflection of the users’ space outside the machine. The viewer is confronted with a distorted vision of themselves and their environment as they interact with the work.

The increase of covert surveillance (both public and private) is a familiar trend but rarely is the audience of such observation permitted to see their performance onscreen. Not only does CCTEX present the user with their own captured image but it also demonstrates how such data can be distorted and manipulated.

Digital Space is a new showcase for creative digital work. This unique platform for film, music, design and interactive media is supported by some of the most advanced digital exhibition facilities in the UK provided by the Showroom Cinema and the Workstation in Sheffield. The international programme of events includes screenings, exhibitions, live performances, talks and workshops.

The Digital Space programme is run in partnership by Lovebytes and the Sheffield Media and Exhibition Centre, and part-funded by the European Regional Development Fund, Objective One.