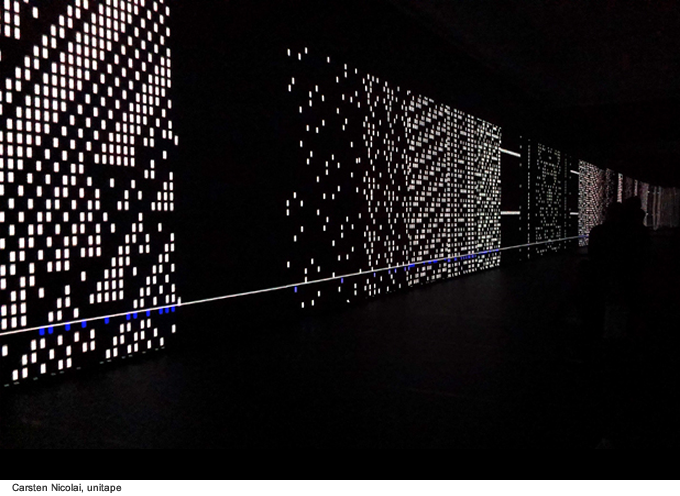 The Kunstsammlungen Chemnitz exhibits Carsten Nicolai’s new monumental audio-visual installation unitape to mark the artist’s 50th birthday. The work was done especially for the museum in Nicolai’s hometown of Chemnitz and will be on show there from 6 September to 1 November 2015. In this work, the artist examines image encodings and notation systems on the basis of the principle of binary-coded information on punched cards which he transposes artistically by means of projections and acoustic elements.

The work unitape takes up the whole of the top-lit west room of the Kunstsammlungen Chemnitz. Extending across the full length of the room (25 metres) is a four-metre-high projection, the graphic structures of which look like punched cards. Images interact with sounds from loudspeakers. The projection is exemplary of the principle of encoding complex visual information in a digital language—as in the case of punched cards. The acoustic signals continue this principle by being themselves initially produced in a computer as encoded information.

The infinite number of possibilities of encoding visual or acoustic information and transferring this to another medium can be experienced in the mirror faces to the sides of the projection which visually expand the latter ad infinitum. 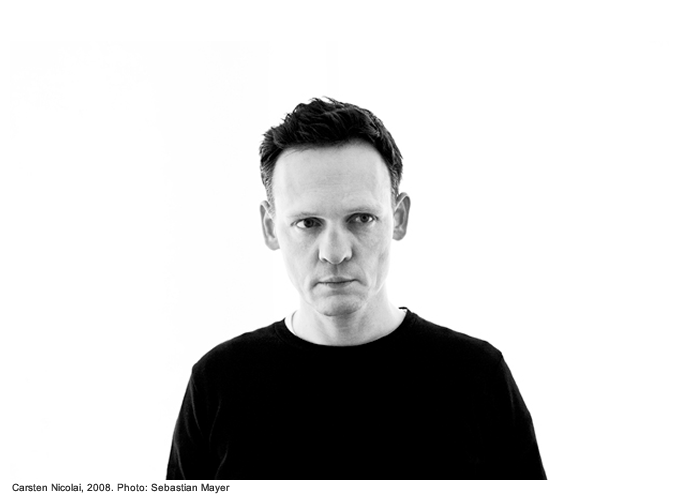 The backdrop and stimulus for this work are to be found in the artist’s involvement with the history of the city of Chemnitz, which used to be one of the most important locations of the German textile industry. The invention of the mechanical loom by Joseph-Marie Jacquard (1752–1834) was one precondition for this, as it enabled the swift production of complex patterned fabrics using the principle of automated control by punched cards. Around 1830, this loom was introduced to Saxony, in the area around Chemnitz, where it revolutionized textile production, as it eventually did throughout Europe.

Through his preoccupation with punched cards, which could be seen as an early form of digital storage media, Carsten Nicolai reflects on communication processes in the industrial era while at the same time addressing issues related to the socio-psychological aspects of the interaction between man and machine. The work is also a reference to industrial history in Europe in general, and the history of the city of Chemnitz in particular.

Carsten Nicolai is considered to be one of the most successful artists and musicians of our time. To this very day, his artistic work is defined by a striving towards the interdisciplinary, the surmounting of the borders between the different artistic genres. Nicolai collaborates with musicians, scientists and technicians, combining the most varied of professional activities, such as visual art, electronic music and scientific exploration. He engages with error and chance structures and the phenomenon of self-organisation, drawing inspiration from scientific processes, systems and structures. His artistic work oscillates between object installation and multimedia installation.

Following its predecessors, unidisplay (2012) and unicolor (2014), the installation unitape is the third work in a series that combines auditive and visual elements. It is also the fourth presentation of works by Carsten Nicolai at the Kunstsammlungen Chemnitz. In 1993, monumental oil paintings and freehand drawings were on show in the exhibition Carsten Nicolai. corpus. This was followed in 2001 by the installation frozen water. In 2005, the artist took part in the exhibition Schrift. Zeichen. Geste. Carlfriedrich Claus im Kontext von Klee bis Pollock with the works perfect rectangle, static tape 03, static tape 04.

Within the framework of this exhibition, Carsten Nicolai will give an exclusive concert under his stage name alva noto on 20 September in Chemnitz’s opera house.