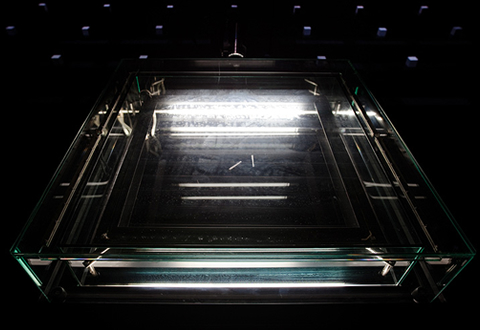 The exhibition is curated by Yukiko Shikata (guest curator) and Kazunao Abe (YCAM).

The Yamaguchi Center for Arts and Media [YCAM] presents polar m [mirrored], a brand new installation piece. Carsten Nicolai and Marko Peljhan, two artists who keep operating on the international stage, team up once every ten years for a collaborative investigation into the state, concept and informational environment of the ever-transforming “earth as environment” in the respective age. Part of this long-term project, this exhibition proposes a new understanding of human existence and living environments as formulated by the artists in the year 2010.

Nicolai and Peljhan are two internationally active artists who both deal with questions of art, science and technology and who have been collaborating occasionally since 1997, when they both took part in the documenta X contemporary art exhibition in Kassel, Germany. Both artists are researching and designing methods of environmental observation based on information and sensor technologies.

With polar m, they are proposing new perspectives on the global ecosystems. Their new work consists of two mirrored cubical spaces (one accessible and one not), a field of radiation generators and a system of radiation observatoria. It probes our understanding of the intelligence of nature and of human existence through the prism of radiation phenomena and their visualisation and sonification.

polar m follows the conceptual traces of the initial polar project in 2000 which was concerned with the assumption of the global communications networks as an intelligent matrix. The initial thesis of polar was that the human created networks, with their exponential growth in complexity, begin to mimic indeterminant phenomena as we find them in nature itself. In the first polar the matrix of cognition of the Solaris ocean was the inspiration for a human created communications and cybernetic system, whereas polar m ventures into a more in-depth understanding of the Solaris ocean. 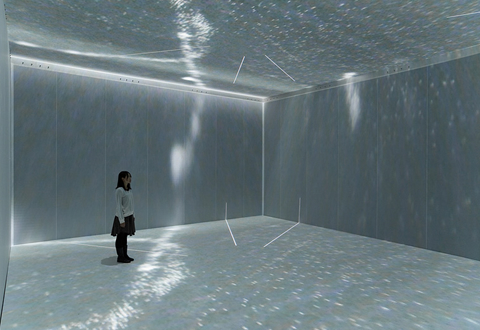 The polar m landscape explores the noise intelligence present in ephemeral and apparently random radiation phenomena through micro and macro transitions. Its spatial setup questions the relevance of the viewer, her or his presence within the space, and potential influence on it through the indenterminancy principle. The focus is on the work of art as an autonomous construction in a large, potentially infinite structure enveloped in an ocean of radiating particles.

Visual radiance together with different types of radiation (electromagnetic, α, β, ɣ) and associated sub-atomic particles are the dynamic triggers of the polar m algorithms. These algorithms sonify and visualise the events transmitted from the instruments present in the landscape (geiger counters, cloud chamber, high frequency receivers, and granite radiation generators observed by robot-controlled sensors). The soundscape is generated through the coupling of indeterminant radiation events. Processes of nature, both man made and cosmic, which normally elude human perception, are temporarily brought down to a human scale.

YCAM [Yamaguchi Center for Arts and Media] is a cultural complex that opened in November 2003 with a theater, exhibition spaces and a small cinema, in addition to the central municipal public library. This shared platform for media technology has hosted theater and dance performances, art exhibitions, film screenings, music/sound events, workshops, and lectures.