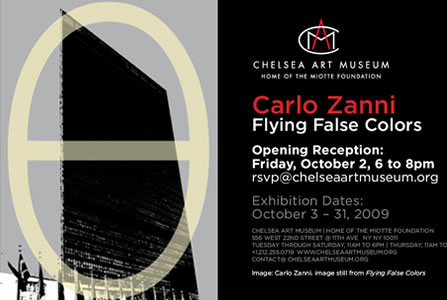 Presented by The Project Room for New Media at CAM

The Chelsea Art Museum is proud to announce the debut of Carlo Zanni’s installation “Flying False Colors” (The Sixth Day). Presented by The Project Room for New Media at CAM from October 1 to October 31, this multimedia project loosely refers to the 1975 espionage film Three Days of the Condor, directed by Sydney Pollack, which was one of the first films to suggest a link between covert US military operations and the control of oil production in the Middle East.

Like many of Zanni’s past projects, “Flying False Colors” relies on the fluctuations of live digital information to affect the outcome of his artwork. “Flying False Colors” consists of a flag set in a wind-generating base that Zanni has programmed to blow at particular speeds and in certain directions based on online data streams that correlate to the number of oil barrels requested by a particular country and the current weather in that country’s capital.

The flag is a replica of the universal Ecology Flag that was designed in 1969 and depicts the Greek symbol of Theta, which derives from thanatos, meaning death. However, Zanni’s flag is fabricated with a pigment that will flake off over time as it is blown, leaving a pure white flag by the end of the exhibition.

In an accompanying essay by New York-based writer Lyra Kilston, she writes: “At work in this project is a strategy Zanni frequently invokes: the pairing of “mere” numbers to their real life implications. This juxtaposition underscores the tension between a distanced and abstemious mathematics on one hand, and the messy, human reality it strains to enumerate.” 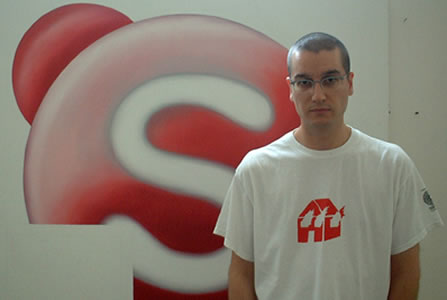 Flying False Colors (The Sixth Day) will travel to Marselleria, Milan in November 2009

The Project Room for New Media and Performing Arts (www.theprojectroom.org) was initiated in 2003 by Nina Colosi at Chelsea Art Museum in New York City. It is an incubator of new ideas, showcasing groundbreaking concepts in all art mediums, and the intersection of the arts through technology. Over 350 international emerging and established artists have been presented in exhibitions, performing arts, symposiums, meet-the-artist programs, and workshops. The innovative public art project, Streaming Museum (streamingmuseum.org) was launched in January 2008.