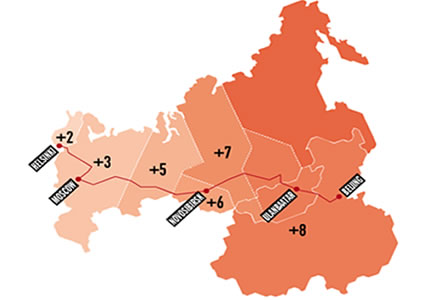 Researchers, activists and media-artists meet on the Trans-Siberian train from Moscow to Beijing to discuss about The Connection Between the War Against Terrorism, Economics and Media-Art

The conference “Capturing the Moving Minds” gathers a pack of  people … artists, economists, researchers, philosophers,  activists … who are interested in the new logic of the economy, the  new form of war against terrorism and in the new cooperative modes of  creation and resistance, together in a space moving in time.  Spatially moving bodies and bodies moving in time (through the  different time zones) creates an event, a meeting that not really  ‘is’ but ‘is going on’.

Is this project about economics, is it political activity or a work  of art? This “boundlessness” or “indeterminacy”, which always  characterizes the creation of new, is where the energy of the project  is coming: The enterprise expresses and exposes itself the “knowledge  economy” in which it exists. It is something the orthodox conceptions  about work, action, economy and art are unable to grasp. In this  organizational experiment everybody is “alone together” like a pack  of wolves around a fire having neighbours to the left and to the  right but nobody behind their backs exposed to the desert.

There are 50 participants on the train involving well known media-artists, frontline contemporary thinkers and political activists. The project has been invited to participate in the International ARS2006  biennial at Kiasma Museum of Contemporary Art in Helsinki and to  arrange an exhibition at the Villa Croce Museo d’arte contemporanea  di Genova during summer 2006.

Mobicasting brings the event directly for all: The Trans-siberian  conference is documented and broadcasted through an audiovisual  mobicasting platform to the internet. The documentarists,  photographers, artists and researchers produce discussions, ideas,  interviews, texts and films along the route. The documentation will  be projected in Kiasma during the journey and it will also be  available on several international www-channels.

15:00-15:20 Intro to the project, its themes and methods (Tuula Karjalainen, Jussi Vähämäki, KlausHarju)