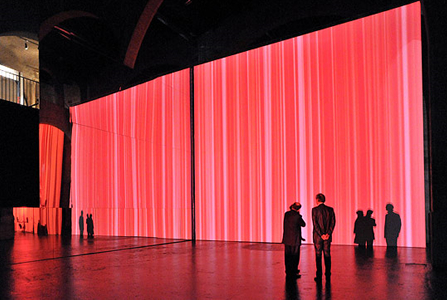 With this exhibition of the Austrian artist Heimo Zobernig, the CAPC is carrying on the tradition of monographic projects devised for the spectacular nave of the Entrepôt.

After studying set and scenery design in Vienna, Heimo Zobernig turned to art in the early 1980s. His early paintings involved different expressions of abstraction, ranging from the lyrical gesture to the serial geometric motif. His early sculptures made with humble materials-cardboard, plywood-borrowed the vocabulary of Minimalism.

The choice of qualityless materials, combined with the attempt to exhaust the pictorial motif through its repetition, situate his work in a vein of criticism and renewal. The artist, associated with the Viennese New Wave, developed an interest, very early on, in performance and video. In a minimal and low-tech mode, these media usually appropriated avant-garde performances and television aesthetics.

Inspired by the theatrical dimension of the nave at the CAPC, the artist has come up with a mise en scène-like presentational arrangement. Red curtains and mirrors form the essence of the installation. But the way they are arranged denies the place’s spectacular dimension, running counter to the installation of in situ works of the Conceptual and Minimal movement which have left their mark on the history of place-works by such artists as Daniel Buren, Richard Serra, Lawrence Weiner. 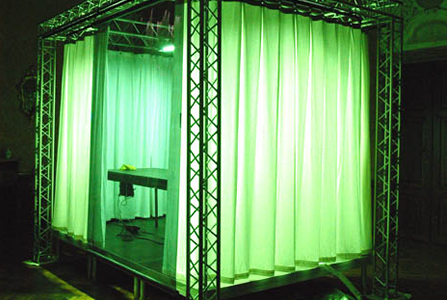 What is at issue for Zobernig is questioning the mechanisms of (de)monstration and perception through a deliberately disconcerting arrangement or device.The simplicity of the arrangement gives rise to many questions about methods and forms of representation and exposition (shadow, reflection, the double, the virtual, illusion, mise en abyme, distancing…). The viewer becomes the plural protagonist of this oddly staged mise en scène.

The artist, born in 1958, has been exhibited in a great many international shows and biennials, but has almost never shown his work in any French museums, apart from one solo show in 1991, held at the Villa Arson in Nice.

Heimo Zobernig, the book: For his show in Bordeaux, the CAPC and Les Presses du Réel Ed. are jointly publishing the first monographic book about him in French. Designed by the artist with the graphic designers Experimental Jetset, the art critic Catherine Chevalier and CAPC director Charlotte Laubard, this new publication offers an oblique look at the artist’s many-facetted oeuvre, with a special focus on the notions of theatricality and display.