Can a common language be found? Report from “Paraphrasing Babel” exhibition 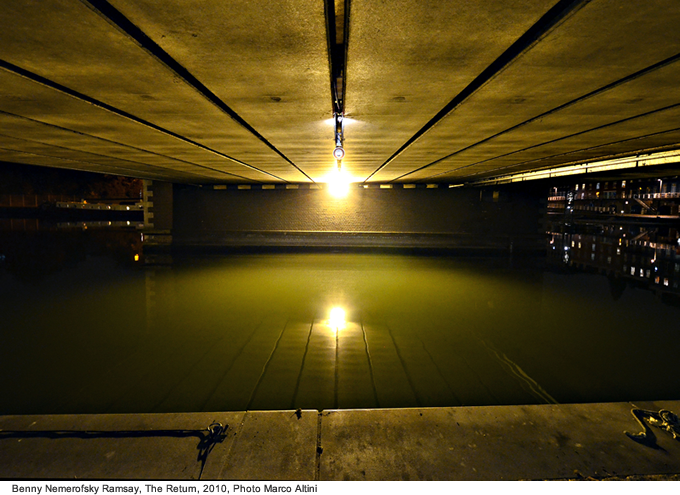 Paraphrasing Babel was an exhibition displayed in many different locations in Maastricht and Heerlen in South of The Netherlands, curated by Bert Van de Boom and Annet Dekker. The program was mainly focused on video installations, sound installations and video projections aiming to reflect on the different perception of language and communication.

As one of the curator declared, in images, texts and sound compositions, the artists explored the themes of the social-political connotations of language, the way in which the media guide our thoughts and behaviours, and how language, through social and technical developments, affects communication. Bringing together the artists’ myriad approaches to the theme, this exhibition gave new insights into the scope and meaning of language.

The Viewmaster Foundation based in Maastricht, which has been organizing video art exhibitions in public space since 2010, has set up this show after the two previous projects For Real (2010, http://www.for-real.eu), and BodyTalks (2011, http://www.bodytalks.eu). Here, twenty-two artists presented  projects in empty commercial buildings, office buildings, residential housing and cultural institutes and, thanks to the installation in some unusual spaces, the viewer was able to understand a new way to experience the two cities. 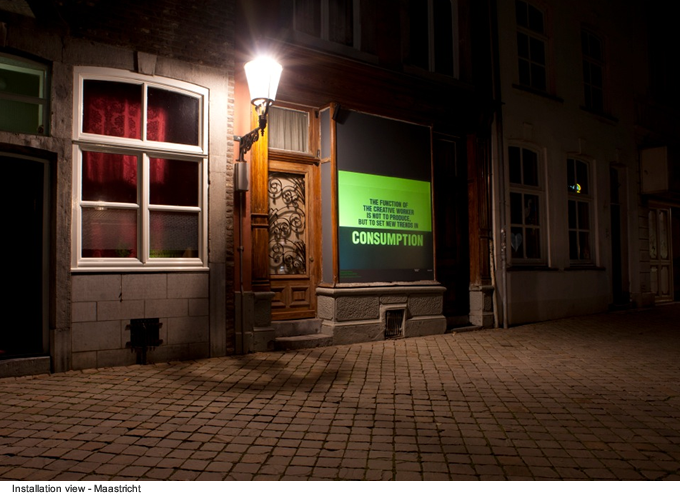 In Maastricht, the renovated harbor called “T Bassin” was the central location in which six video were displayed. The Return, a sound installation by Benny Nemerofsky Ramsay (CA) welcomed the public. The artist asked male singers with high voices to imitate a siren. Apparently the sound is not perceived as a human voice, but a mechanical one. With this work, the artist  pushes the spectator to an intensive listening. Moreover, the male voice is the subject of Portrait of a Young Man. Here Nemerofsky Ramsay took Jimmy Somerville’s voice as an example of how a high-pitched voice is often associated with homosexuality. The artist presents three different actions – flower arranging, astronomy and American Sign Language – in order to create an experimental portrait of the famous Bronski Beat’s singer.

The investigation about the perception of sounds and language proceeded through two videos by Katarina Zdjelar (SR): Shoum and A Girl, the Sun, and an Airplane Airplane. In the first one, two Serbian men are listening to Shout, a famous song by Tears for Fears. Even if they don’t know English, they are asked to write down the lyrics. The result of this process is a sort of new language based on the phonetic mimicry, which has a reference in the reality. With the second one the artist invited different people in Tirana (Albania) to remember some words in Russian, which was the official language during the communist regime. The people interviewed only remembered some words related to the political context such as “comrade” or “working class” and this revealed how personal memories are strongly linked with politics and how much it influences the life of an individual. 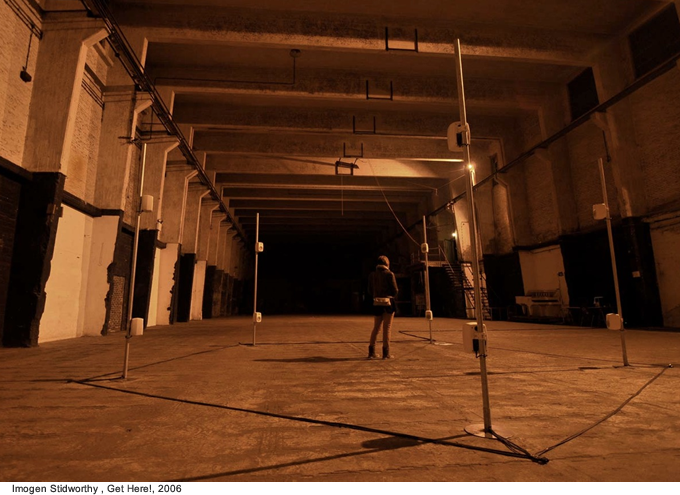 The last video, which could be seen in the ancient harbor, was Mediations (towards a remake of Soundings) by Gary Hill (US). Hill is one of the most important contemporary artists investigating the relationships between words and electronic images and, with the action of filling a speaker with sand, he would like to establish a new relationship with the viewer. Through its “processual ritual”, the image and especially voice, keep changing in order to underline the nature of sounds, which are composed by vibrations.

Lexeem by Marijn Moerbeek (NL) was selected from an Open Call launched for Paraphrasing Babel project and it reflected upon the change of meaning of an artistic message when it is transformed in another medium. Lexeem is composed by computerized voices that were trying to explain a musical composition, so the listener is guided through a possible interpretation of the work.

Going ahead, the location changed and suddenly the viewer could experience the sound installation Get Here by Imogen Stidworthly (UK), beautifully installed in the Landbowbelang. The artist recorded the voices of nineteen Liverpool residents, Somali refugees and young actors repeating “Get here!” with the typical Scouse accent. The work questioned the relationship between a place, language and identity and the result is an indefinable feeling. Despite the fact that the place was huge and similar to a public square, the voices create an intimate relation with the public because of the echoes that remind us that it was a closed space. 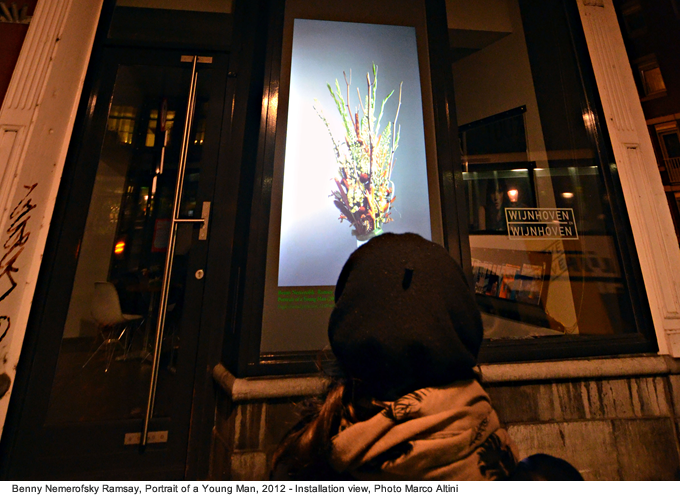 The use of the Internet is central in several works presented in the exhibition: YOUNG-HAE CHANG HEAVY INDUSTRIES (KR/US) showed two videos The End and Perfect Victoria, in which language, intended as a gateway to the Internet, played the most important part. With their videos, theytell us short stories in which socio-political messages are the most important aspects.

American video diaries from the Internet are the inspiration for Natalie Bookchin (US). In My Med people tell to an imaginary audience a list of psych pharmaceutical drugs to treat depression. The short video showed how people sometimes speak publicly about a very private problem transforming it into a social and public experience.

The Internet inspired Christopher Baker (US) to create Hello World. As well as Bookchin’s video, Baker reflected on the possibility to involve a massive public through the use of an online platform like You Tube. The videos, whichcompose the huge installation, are a mosaic of experiences, stories and sounds creating a sort “cacophony of confessions”. 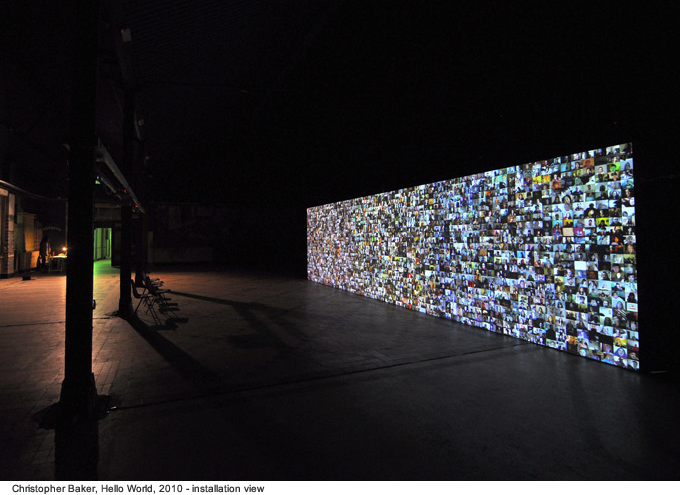 The manipulation of a message coming from a medium – in this case TV – is central for Pas de deux, a video choreography by eddie d (NL). Rutte and Wilders, two Dutch right-wing politicians, are the protagonists and their gestures, words and facial expressions become a comical translation in which the debate about nationality became a sort of prosaic scene. Mieke Gerritzen (NL) presented the video Beautiful World in which she shows how everything is connected to economic interests. Being one of the first graphic designers involved in the design of digital media and the web, her focus is on the power of the visual language of the media. Through the repetition of famous logos alternated with philosophic notions, she wants to make aware people of the superficiality of the world.

Furthermore, pop culture is the subject for Candice Breitz’s (ZA) video called A-B-B-A. With her multi-channel installation, she present the four member of an ABBA cover band separately, while they are trying to communicate with the audience. The result is a confusing confluence of sounds, which remind the viewer of the typical sound of ABBA’s songs. So, it can be seen that her aim is to deconstruct the influence of pop culture on the contemporary consciousness.

Annja Krautgasser (AT) with Prologue presented a dialogue as a written text with no sounds or voices to be heard. The video appears as a chat room in which dialogues taken form films by Antonioni or Godard translated into English are transcribed. As a result, the dialogues are completely decontextualized, but at the same time, the artist creates the possibility for new stories. 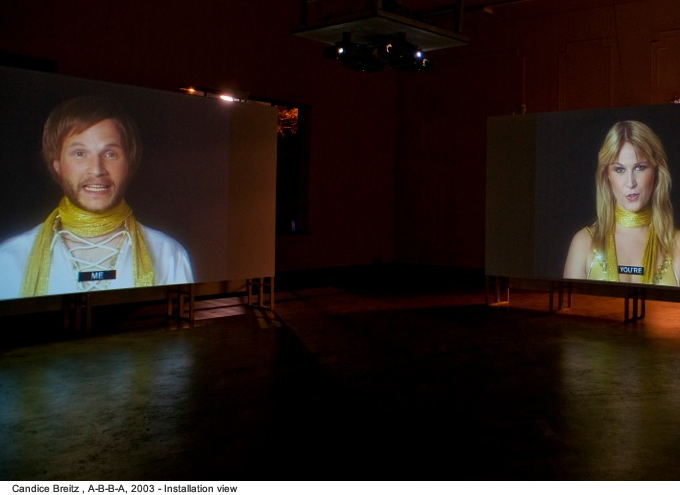 Finally, the imitation of animal sounds is the focus of Chicken Speaks to Duck, Pig Speaks to Dog by Zhou Tao (CN). Here Chinese farmers communicate with each other through a language that is not human but taken from nature. The artist, in putting the farmers on a tree in the city, shows how it becomes hard to connect rural and metropolitan traditions and lifestyles.

In addition to this program, in Heerlem videos by Vera Frankel (SK/CA), Louis Lawler (US), Christian Marclay (US), Jeroen Offerman (NL), Nika Radi (HR), Anna Raimondo (IT) and Thomson & Craighead (KR/US) were displayed.