If we think to Egypt at this time, probably there are not many positive things that come to our mind, especially looking at the art and culture world and at the issue of freedom of expression. Still, good things also happen there, as I tried to tell in my book, titled Cairo Calling (Agenzia X, 2016).

For example, the last edition of the Cairo International Electronic and New Media Arts Symposium, better know as CairoTronica, was held from May 3rd until the 17th in some places of the Egyptian metropolis, in the central districts of Zamalek and Downtown.

As the name of this festival can easily suggest, CairoTronica combines creativity and technology and it stands as an opportunity for exchange ideas, concepts, products and services, in the ever-changing field of electronic and new media arts. Like a true wonderland for enthusiasts and insiders in Cairo, it featured artists, engineers, designers and researchers from Egypt, the Middle East and North Africa region, and beyond. This two-week symposium focused on all forms of digital art – from video to music to visuals – and hosted a huge exhibition, workshops for Egyptian students and emerging digital artists, as well as film screenings, and video-games, robot and artificial intelligence demos. 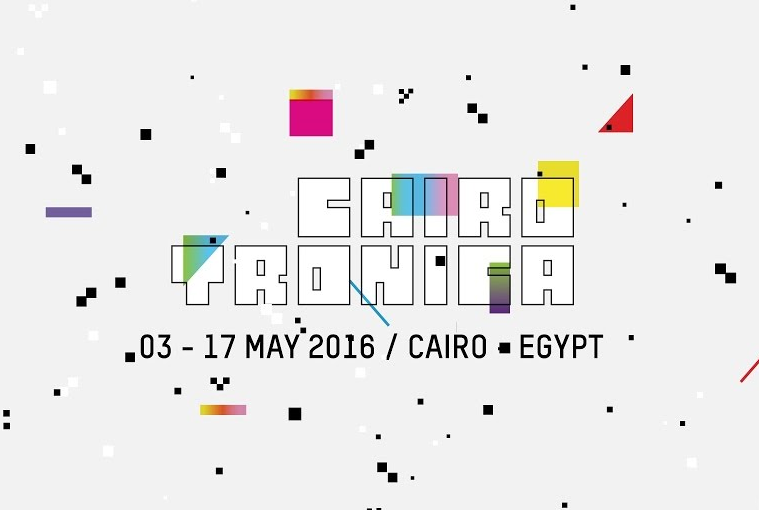 For two weeks, in different venues of Cairo, as AUC Falaki Theater, Cairo Opera House and Zaywa cinema, people have been exposed to the latest in electronic arts installations, surrounded by an interactive environment, as well as they attended exhibitions, screenings, workshops, conferences and outdoor performances.

Everything in CairoTronica program encouraged participants to improve, re-imagine, develop unexpected but useful ideas and set up collaborations, hopefully spreading awareness and knowledge about the possibilities, challenges and side effects that new digital technologies offer, to creating a new international hub and platform for electronic art in the Middle East. Not by chance, the topic of this edition was Only Connect!, the imperative that leads the development of digital art, the present cultural convention, and the evolution of social media, and that has implications for education, urban planning and human relations.

We can talk about this CairoTronica edition, ended few days ago, with Haytham Nawar and Ghalia Elsrakbi, who respectively are the festival director and the exhibition curator, both of them artists, researchers and university professors. 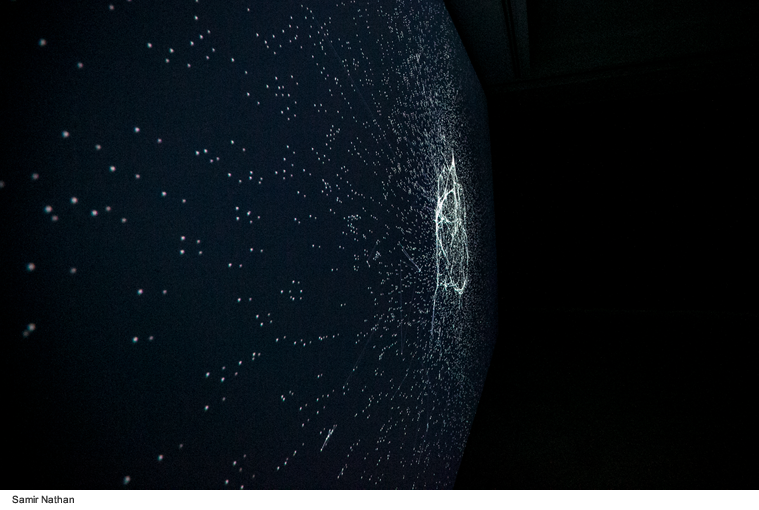 Claudia Galal: In the last few years you have worked all around the world and taken part in international festivals, symposiums and events. When did the idea of CairoTronica come to your mind and why did you feel the need to bring this kind of experience in Cairo?

Haytham Nawar: As researchers, we are both very much interested in technology and in its relation to the arts. Technology has profoundly changed the way people connect, live, work and play. It has become increasingly accessible across all socio-economic strata and provides us with tools to communicate, share information, or even bring about radical change to a nation’s political landscape. Social networks, for example, have facilitated and expedited global connectivity and communication, and provide a platform from which more technological innovation and development can be achieved from the comforts of home.

Art and technology have historically influenced one another. There have been great strides made in electronic art through the contribution of contemporary artists whose practices have embraced, enriched and inspired the development of emerging technologies. There still continues to be a lack of recognition of the influence of art on technology and vice versa. 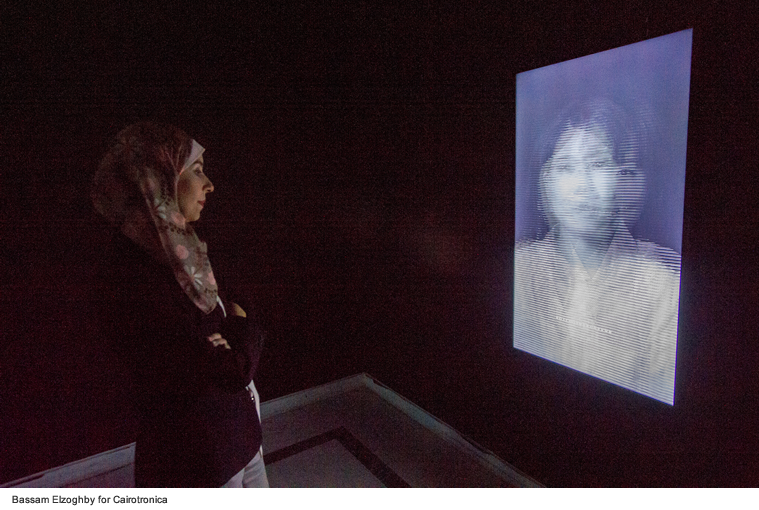 Claudia Galal: Do you think there has been – or still there is – a kind of gap to be filled? And so, what kind of audience did you think about? What was your model of event at the beginning?

Haytham Nawar: A change needs to come about internationally, and more specifically, regionally in the Middle East. Egypt is a big country, with more than 90 million inhabitants, but the art scene is still very small and we believe that there is a significant need in contemporary Egyptian art scene. Our big target has been the public audience, the common people, but for sure the majority of the audience are artists, designers, scholars etc. The model event for us is Ars Electronica, as Festival for Art, Technology and Society.

Claudia Galal: The festival lasts two weeks and the program is really rich. How did you select artists, projects, screenings, works?

Haytham Nawar: Our aim for the first edition of CairoTronica was to create an intense and full experience and create a comprehensive event, covering much as possible many aspects and forms of electronic and new media arts. The variety of events makes possible for artists and researchers to interact with each others and with the public audience on many levels.

We have been following many of the invited artists for a while. We try to invite artists who operate in different contexts and create a meeting point to exchange and inspire. Also, we find that is very important to give young artists a chance by applying to exhibit through an open call where a selecting committee of experts chooses some of them. 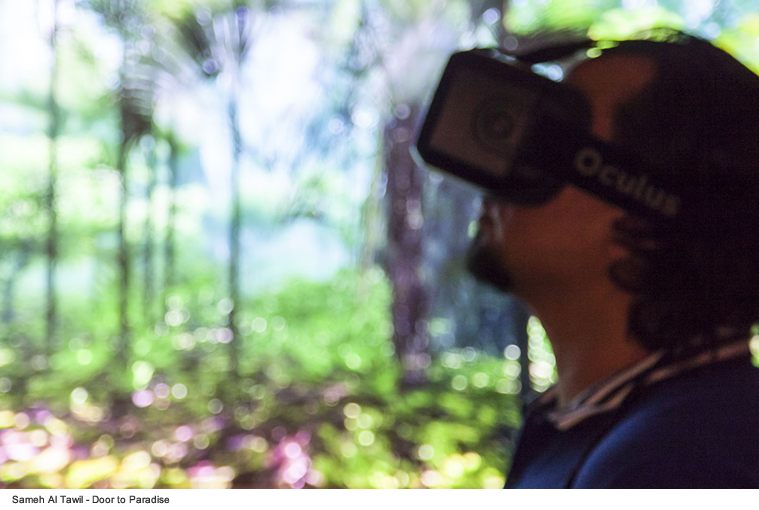 Claudia Galal: “Network” is a crucial concept both for the aesthetic side of digital and new media art and for the methodological side. But from the practical point of view, what is the basis of your network of artists, experts and spaces? Is there a common ground?

Haytham Nawar: Our network is based on digital and new media arts festivals around the world in addition to the academic institutions and scholars from around the world. In term of spaces, the governmental spaces are based on credibility and the reliability.

Claudia Galal: How has been this edition? What were the most crowded events and venues? Which kind of audience has attended CairoTronica?

Ghalia Elsrakbi: This edition was for sure a successful one, as it is the first one to be organized considering scale and the combination of activities. Organizing the events in many different locations and offering it for free, made the festival accessible for different types of audience. The Palace of Arts in Zamalek, for example, a place that is well known for its traditional arts program, was for sure an interesting challenge to transform to a completely different space with new curatorial vision and introduce new forms of art to its usual audience.

Also considering its position in a public place, the exhibition was able to attract the people in the street and by that reaching a new audience who usually is not familiar with this kind of art. 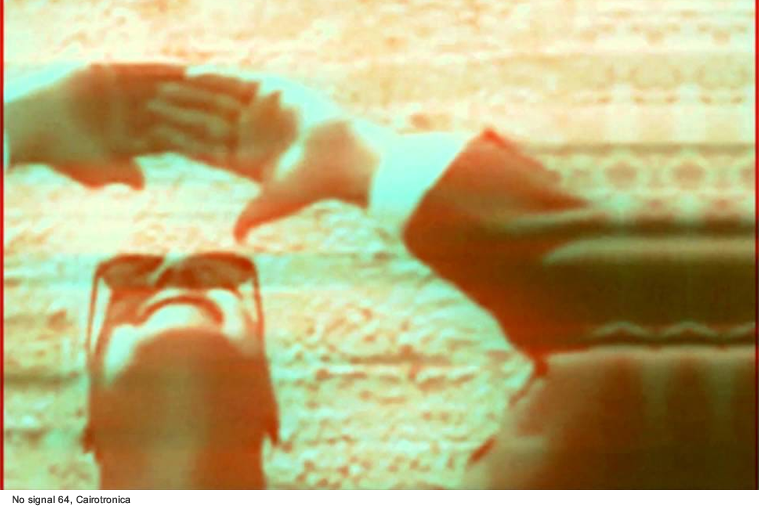 Claudia Galal: Haytham, looking at the full program, which is in your opinion the most innovative work or project or event of the 2016 edition?

Haytham Nawar: Many of the artworks are very innovative, such as Door To Paradise by Sameh El-Taweel, for its critical religious questions about Hell Vs. Paradise, or Ruben Patar and his work Drone survival guide, Irreversible by Norimici Hirakawa, Baby come home by Foundland and many more.

Claudia Galal: Ghalia, looking at the exhibition, which closed few days before, can we take stock of it?

Ghalia Elsrakbi: Impossible is nothing. Whatever are difficulties and the challenges, nothing can stop you to create and build new initiatives.

Claudia Galal: Over the last years I have thoroughly investigated the art and culture scene in Cairo, so I’m really interested in knowing your opinion about that. Can you describe the electronic and new media art scene in Cairo and in Egypt?

Haytham Nawar: It is rapidly growing, especially after the 25th of January revolution.

Claudia Galal: Which is, at the moment, the most interesting and exciting place to be a media artist and a researcher in the Middle East/Africa area?

Haytham Nawar: All the Middle East and North Africa regions are fascinating places for media artists, considering the emerging new media art scene, the usage of new technologies in general and the undeniable role of the internet and social media on many different levels, politicly, socially and artistically, makes it “exotic” and interesting to explore and invest on. 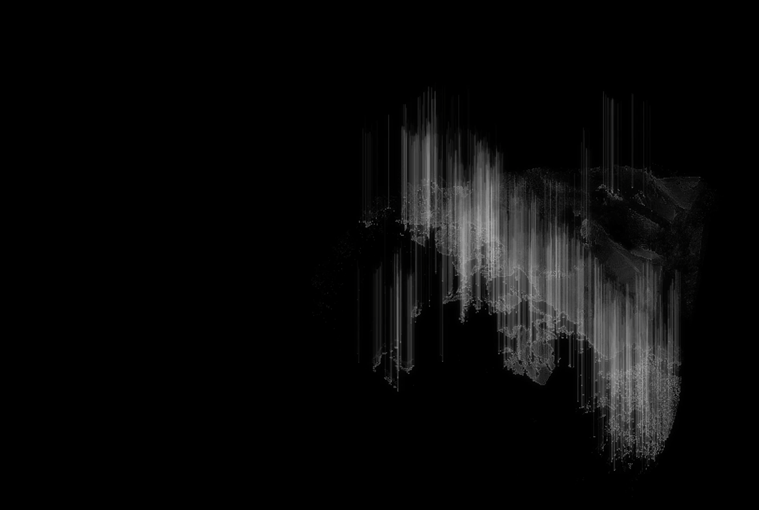 Claudia Galal: I can image it isn’t so easy to plan, organize and manage such an event in Cairo. Which problems and obstacles have you find, organizing CairoTronica?

Haytham Nawar: We had many challenges, some of them were expected, and we were prepared to handle, but some were unexpected. Such economic crisis, political instability, and bureaucracy. However, we see it now as reasonable, considering the scale and the short time to plan and organize the whole symposium.

Claudia Galal: What can be improved for the next editions?

Haytham Nawar: Our big goal is moving Cairotronica to another city in Egypt and possibly other cities around the world. Then also to have better media coverage and more international collaborations from Africa, Asia, Central and South America.