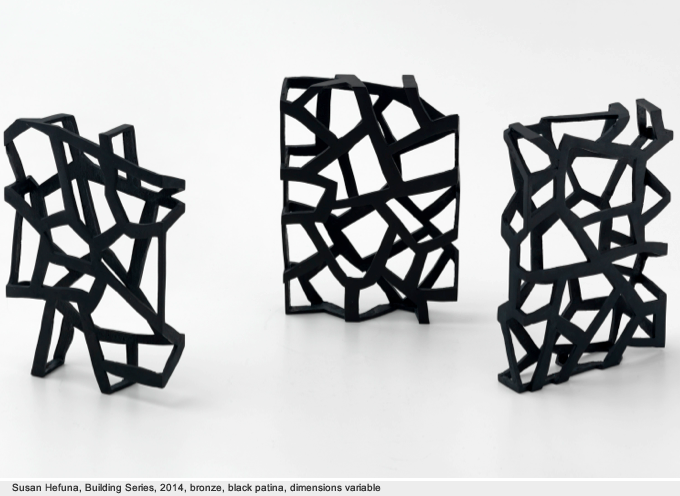 Pi Artworks London is pleased to announce Susan Hefuna’s third solo exhibition with the gallery. Cairotraces features a new series of her highly regarded works on paper as well as a newly commissioned palm wood installation that are influenced by the streets of a city that has been a reoccurring influence in her practice.

At the core of Hefuna’s practice is her fascination with the networks and structures of connection that inhabit public spaces and become the framework for peoples’ interactions with each other. She is particularly interested in how these networks become visible through and influenced by architectural models and city planning. For Hefuna, these public spaces, particularly urban centres, are the intersection of politics, architecture, and history and they shape the formation of different social identities.

This interest stems from the artists’ duel German – Egyptian heritage, which has allowed her to observe the towns and cities of two cultures that are simultaneously foreign and familiar to her as well as her nomadic existence as an artist who immerses herself in the life of the various countries she works and exhibits in. 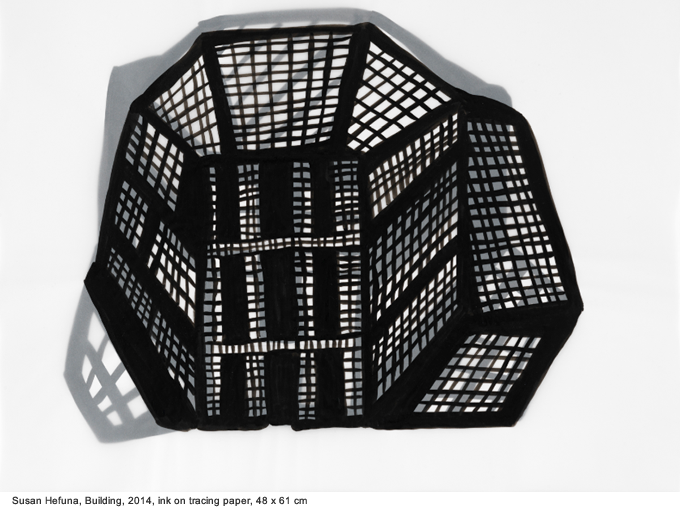 Since the late 90’s, Hefuna has used the structural forms of the mashrabiya screens she originally observed in Cairo to visualise her anthropological inquiry into public spaces. Mashrabiyas are traditional latticework screens built out of interconnected knobs and rods that form unbroken, crosshatch patterns; they beautify buildings while protecting the inhabitants from harsh sunlight. For the artist, these screens reflect many of the key issues that affect the interactions she observes on a day-to-day basis: the delineation between private and public space, veiling, and voyeurism. Hefuna’s mashrabiyas’ interconnected dot and line motifs, often interwoven with words or phrases, are a template with which she can reify the intangible networks and structures of connection that inhabit public spaces and become the framework for peoples’ interactions.

Hefuna’s current work also suggests other interlocking structures, such as, DNA, embroidery, tapestry, molecular structures and, most significantly, buildings and maps. The viewer is not innocent and reads the work differently depending on their cultural or social background.

Upon arriving at a new location, Hefuna spends a few days traversing its streets and squares until this calmative process lulls her into a state in which she feels ready to compose work that will captures the atmosphere of the location. Her initial artistic response is usually a series of delicately composed ink and pencil drawings. These start with a single dot and line that is unfolded in a single session without the nib ever leaving the paper.  In their humble and austere nature, these structures recall the drawing experiments of the American Minimalists. However, they are not subjected to a strict pre-determined system but instead are intuitively composed and open to changes and subversions that are influenced by her location. Each finished piece relates to a place, a city, a body, a history, memory, that combines the experiential with the abstract, without ever subjugating one to the other.

Accompanying these drawings will be a series of cubic, palm wood structures similarly conceived and constructed in the Egyptian capital. These act as three-dimensional renderings of the exhibited drawings. Both the two-dimensional and three-dimensional work share similar fragile and porous crosshatch layers, yet the latter can be viewed from several perspectives. This allows the viewer to experience the interplay of light and shadow that changes through the day, therefore more literally reflecting the architectural resonances within Hefuna’s practice. 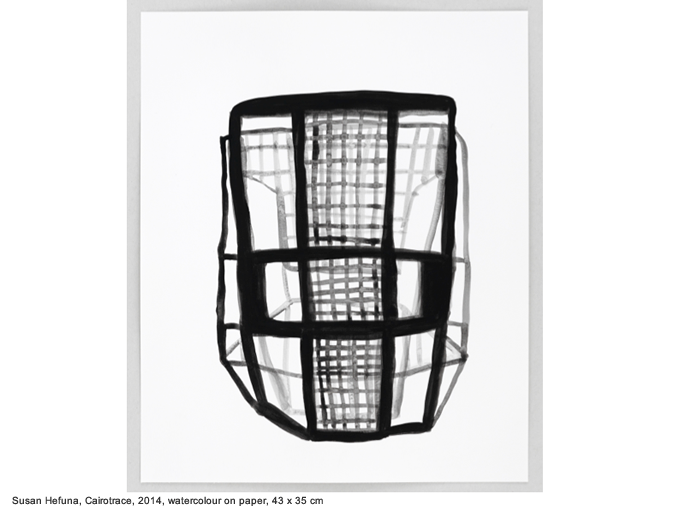 Hefuna has had solo exhibitions in 2014 at The Sharjah Art Foundation, Sharjah, UAE ; the Osthaus Museum, Hagen, Germany;  both branches of Pi Artworks; and Rhona Hoffman Gallery, Chicago, USA. Other recent solo exhibitions include Notationsnotation at the Drawing Centre in New York City, USA (2013); Susan Hefuna at Rose Issa Projects, London (2013); Vantages at the MAD Museum in New York City, USA (2012-13); Susan Hefuna at Rhona Hoffman Gallery in Chicago, USA (2012); and I Love Egypt – A Temporary Learning Camp, a collaborative commission by The Serpentine Gallery, London, UK and Townhouse, Cairo, Egypt, which took place at London’s Speaker’s Corner in 2011.