By any media necessary. “Disturbances” by Critical Art Ensemble 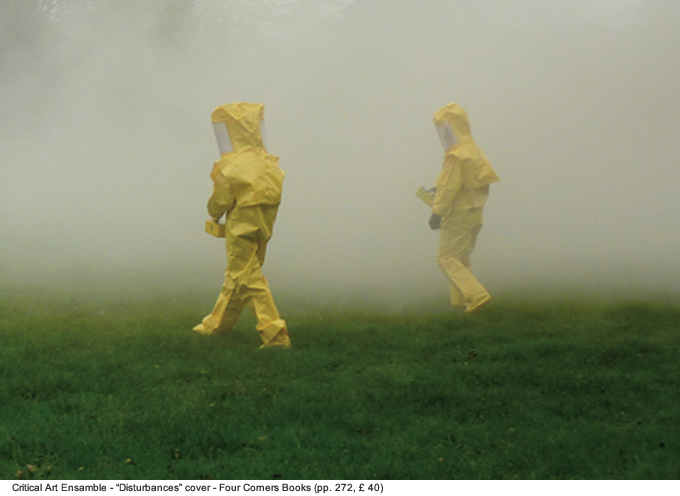 Art, technology and activism explored by any media necessary. I am aware of few art projects that have undertaken a long, deep and challenging path through these three topics with an energy comparable to Critical Art Ensemble’s (CAE).

Perhaps it was worth waiting 25 years to finally see collected and organised the large amount of material, performances, writings and images produced by CAE. But the book Disturbances, published by Four Corners Books (pp. 272, £ 40) – http://www.artbook.com/9780956192882.html – is a monument of this art collective that since 1987 hits the world with its incredible work. This book is not a simple catalogue or retrospective, but rather a journey through the amazing diversity and complexity of a body of work that has embraced postmodernity’s technopolitical evolution with a broad range of performative practices and deep theoretical efforts. Disturbances gathers material from dozens of projects and performances, but it’s not a collection of everythig CAE has done. That would have been impossible.

Since its formation in 1987, Critical Art Ensemble has set out to explore the intersections between art, critical theory, technology and political activism. The award-winning group of tactical media practitioners has exhibited and performed in a variety of venues internationally, from the street to the museum to the internet. Disturbances is the first book to assess the group’s 25-year history, examining its work on environmental, mediatic and bio-technological politics through a selection of its texts and performances. 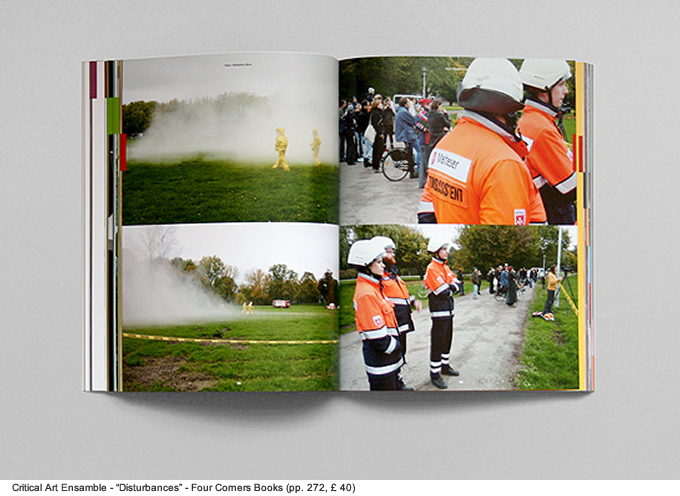 From fake bioterrorist attacks, to GM food analysis, the art collective has digged into the fears and potentials of science and technology. At the same time, it has never surrendered to the faith in the now discredited Enlightment ideal of democratic progress through scientific evolution or to New Age’s escapes into territories of pure opposition to scientific knowledge. In fact, art for CAE has always been intertwined with critical thought. The collective has authored six books, thus tracing the path of an evolution of the relationship between art, politics and technoscience. In the publication, readers will be familiarised with the complex vocabulary created by CAE in order to tackle contemporarity, with expressions such as electronic civil disobedience, digital resistance, contestational biology or pancapitalism.

Their work on the public space, digital media or biological sabotage, for example, have had a strong influence on a generation of activists and critical scholars. In fact, their exploration of the promises and risks of emerging technologies, through both theoretical reflection and public performances, have tackled one core question: is there a liberatory means of escape for technologies, outside the realm and the control of the government, the media, the military, and corporations?

In its work on digital media and biotechnologies, two key sectors of contemporary capitalism’s evolution, CAE has explored this question in depth. While I am sure that many would argue that asking this question to an art collective cannot be considered as the best possible choice, I believe that CAE has gathered so much incredible work that its contribution to the political understanding of contemporary societies’ evolution can’t be dismissed or undervalued. 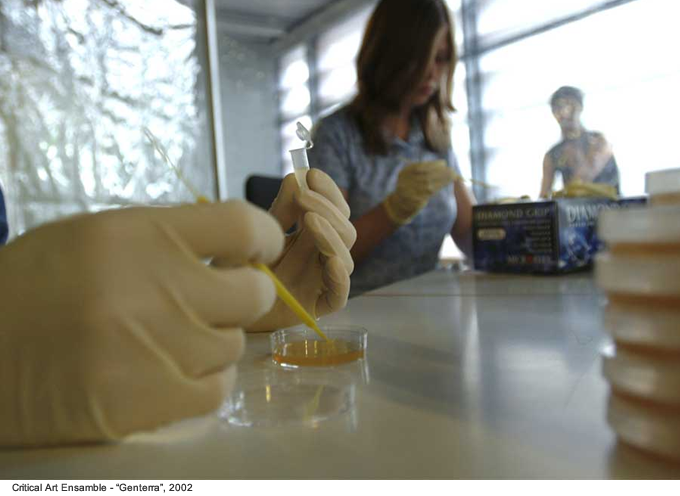 CAE’s work converge in fact to a single point. The media, technological and biomedical innovation are under corporate control. Human sociality, health and lives have been forced into the space of the market. Is resistance possible? One great lesson we should learn from CAE is that if a different technoscientific future is to built, it will be built upon diffused critical knowledge. We need to bring technologies to citizens and open them up to political scrutiny and tactical appropriation. The aesthetic dimension of performative art here is just a tactical problem.

What this book shows is exactly how different and heterogenous languages and practices can and should be used to imagine new forms of political – maybe I should say biopolitical – expertise that exceeds the mere technical level and goes straight to the belly of the beast. Long live.