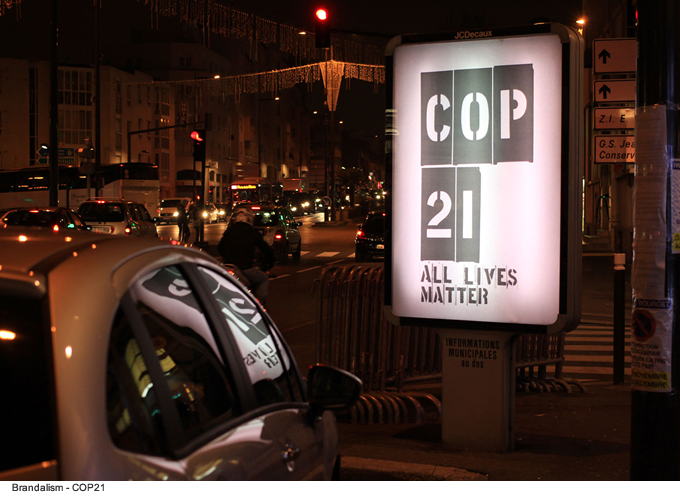 Over 600 artworks critiquing the corporate takeover of the COP21 climate talks were installed in advertising spaces across Paris this weekend -ahead of the United Nations summit beginning Monday 30 November.

Amidst the French state of emergency banning all public gatherings following the terrorist attacks on 13 November in Paris, the Brandalism project has worked with Parisians to insert unauthorized artworks across the city that aim to highlight the links between advertising, consumerism, fossil fuel dependency and climate change.

The artworks were placed in advertising spaces owned by JC Decaux -one of the world’s largest outdoor advertising firms and an official sponsor to the COP21 climate talks. Other prominent corporate sponsors of the climate talks such as Air France, GDF Suez (Engie) and Dow Chemicals are parodied in the posters -whilst heads of state such as Francois Hollande, David Cameron, Barack Obama, Angela Merkel and Shinzo Abi also feature. 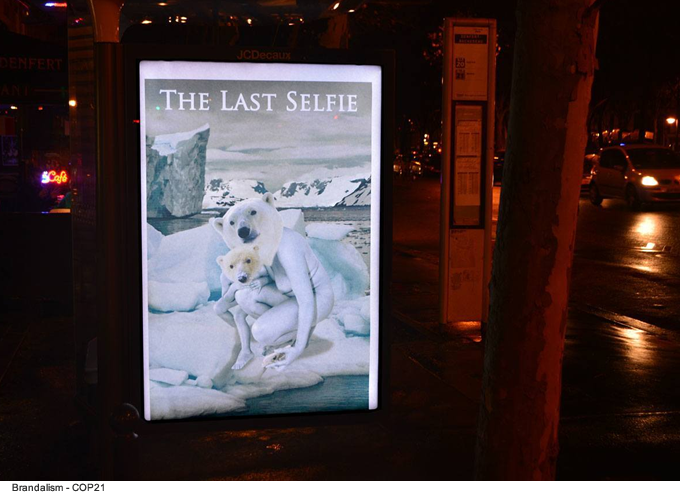 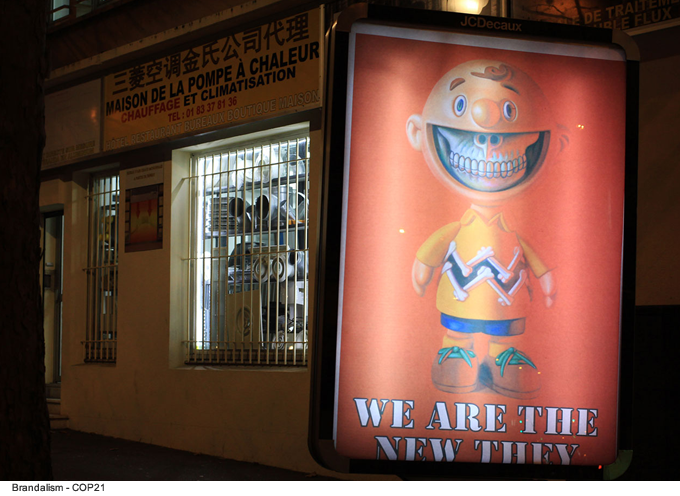 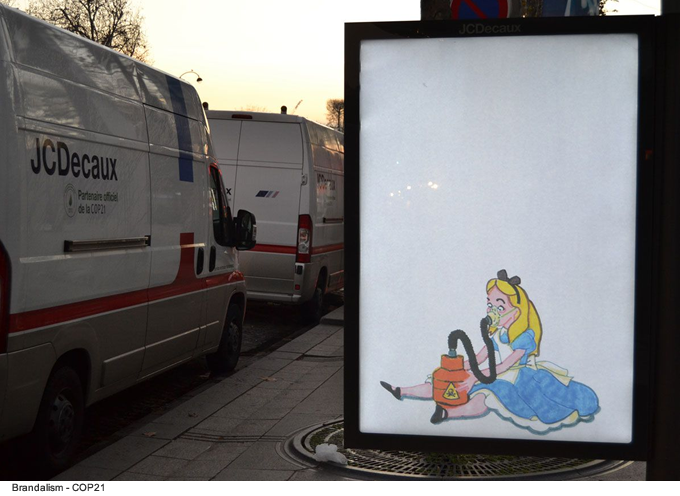 The artworks were created by over 80 renowned artists from 19 countries across the world including Neta Harari, Jimmy Cauty, Banksy-collaborator Paul Insect, Escif and Kennard Phillips – many of whom featured at Banksy’s Dismaland exhibition in England this summer.

Joe Elan from Brandalism said, “By sponsoring the climate talks, major polluters such as Air France and GDF-Suez-Engie can promote themselves as part of the solution – when actually they are part of the problem.”

Elan continued, “We are taking their spaces back because we want to challenge the role advertising plays in promoting unsustainable consumerism. Because the advertising industry force feeds our desires for products created from fossil fuels, they are intimately connected to causing climate change. As is the case with the Climate talks and their corporate sponsored events, outdoor advertising ensures that those with the most amount of money are able to ensure that their voices get heard above all else.”

The art works were installed on BlackFriday or Vendredi Noir; the most hectic and competitive shopping day of the year. Other posters called on people to take to the streets as part of the Climate Games – the world’s largest disobedient adventure game as well as protesting the Solutions 21 conference – a large corporate exposition being held at the Grand Palais during the climate talks. 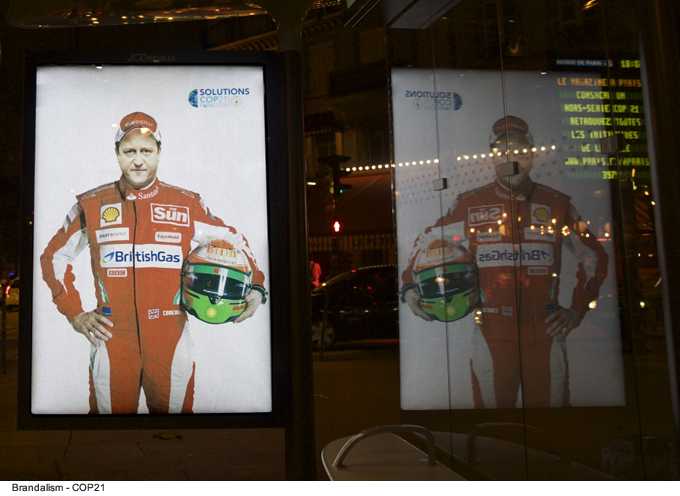 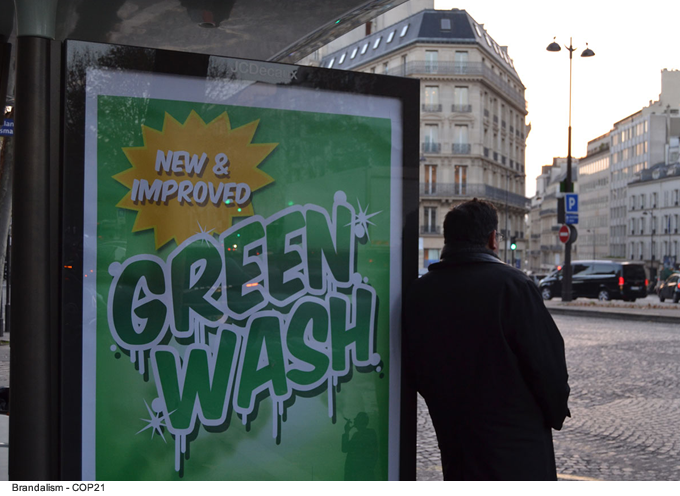 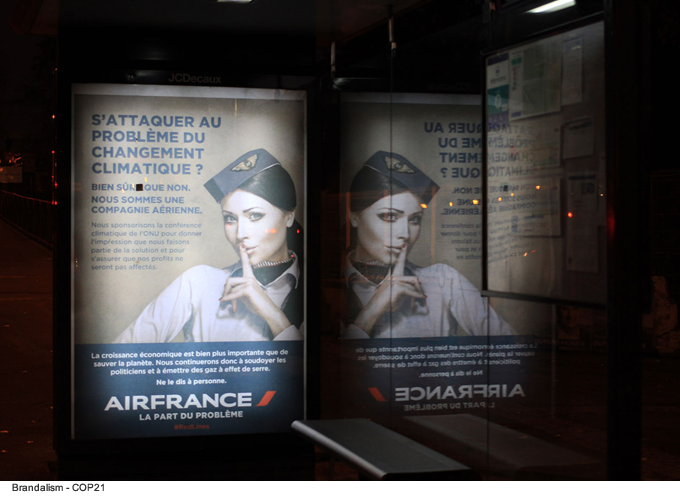 Bill Posters from Brandalism said “Following the tragic events on 13th November in Paris, the government has chosen to ban the big civil society mobilizations – but big business events can continue. The multinationals responsible for climate change can keep greenwashing their destructive business models, but the communities directly impacted by them are silenced. It’s now more important than ever to call out their lies and speak truth to power. We call on people to take to the streets during the COP21 to confront the fossil fuel industry. We cannot leave the climate talks in the hands of politicians and corporate lobbyists who created this mess in the first place.”