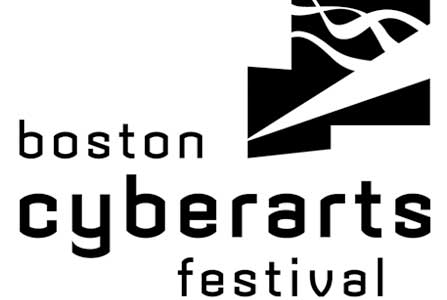 Exhibitions and performances by artists who use computer technology as an integral part of their work are on display at the fifth Boston Cyberarts Festival, taking place April 20-May 6, 2007.

The Festival, which brings together visual and performing artists, cultural organizations, educators, and high-technology professionals, takes place at locations in and around the Boston area, at selected other locations around New England, and online.

A searchable list of events and exhibitions is available on the Festival’s website, and is being updated continually as events are added to the roster. The biennial Boston Cyberarts Festival has become an eagerly-anticipated part of the Boston-area arts and technology scene since the first event took place in 1999. The Festival is the largest collaboration of arts organizations in New England and the only Festival in the world that encompasses all art forms, including both visual and performing arts, film, video, electronic literature, and public ar.

Boston Cyberarts is the recipient of the 2007 Commonwealth Award, given by the Massachusetts Cultural Council.

Cyberart encompasses any artistic endeavor in which computer technology is used to expand artistic possibilities – that is, where the computer’s unique capabilities are integral elements of the creative process in the same way that paint, photographic film, musical instruments, and other materials have always been used to express an artist’s vision. The Greater Boston area has long had an international reputation as a center of cyberart, dating back to pioneering work done by such world-class institutions as WGBH and MIT.

The creative connection between two of Boston’s most vital forces  the arts community and the high-tech industry  is once again in the spotlight at the fifth Boston Cyberarts Festival, with more than 60 exhibitions and events in and around Boston and Cambridge from April 20 through May 6. The Festival, a biennial event founded by Director George Fifield and launched in 1999, is the first and largest collaboration of artists working in new technologies in all media in North America.

Among this year’s highlights are:

Ideas in motion: the body’s limit

An international roster of dance professionals and engineers are featured at this conference and performance series that explore the use of new technologies in dance.

This year’s Festival includes fourteen concerts, including the world premiere of the multimedia opera The Puzzle Master, an all-day Visual Music Marathon, and Freex to Geex II at Berklee.

Interactivity is a major theme this year. Exhibitions featuring interactive work are taking place at ten organizations, including the Judi Rotenberg Gallery, MassArt, UMass Lowell, and of course, Art Interactive.

Activities for young people, families, and teachers take place at Cloud Place, the Museum of Science, and the Cambridge Science Festival.