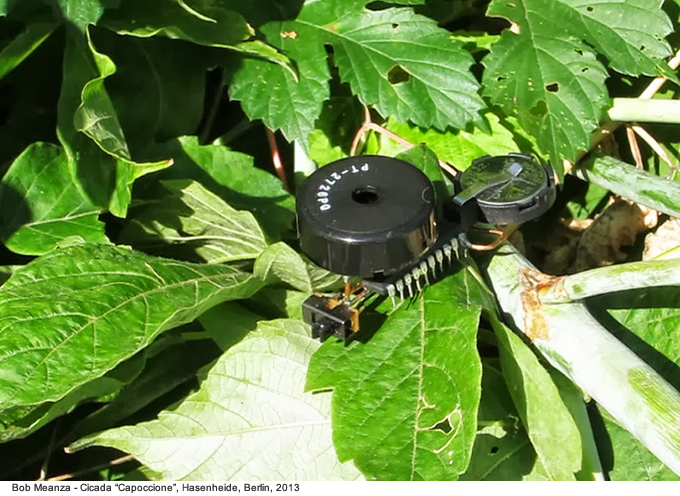 In a sunny July day, when you are lying in a meadow at the edge of the forest, the sound of cicadas invites you to fall asleep. Then you discover that this familiar sound comes instead from hundreds of small mechanical insects. Dream, nightmare or, simply, an interesting development in the contemporary sound art? We spoke about with Bob Meanza, author of the Cicadas installation.

Cicadas are tiny robotic insects, built with electronic components (relays, piezos, buzzers) and AVR microcontrollers. The Cicadas v1.0 were developed for a sound art project in Berlin, now a second breed of smarter insects (v2.0) is being planned. A singing Cicada is shaped by means of a programmed microcontroller (the brain) connected to a vibrating component (which is the sound producing part). A small battery cell and a on-off switch complete the body of the insect, which is soldered and then ready to begin its life in the outer world. As soon the Cicadas are turned on, they start interacting with the ambient they’re in, giving very different results depending on the sonic dialogue with the context. In a quiet and empty room, the sound installation will turn the focus on the insects themselves. But in a natural, more lively soundscape, the insects will just join in, lost in the millions of sonic events being created by man and nature.

Bob Meanza is the nickname of Michele Pedrazzi, media artist and electronic musician born in Verona in 1978, now based in Berlin. He makes music with robots of various types and sizes, be they spring-loaded or quad-core-processor powered, but he studied jazz piano with Riccardo Massari Spiritini in Verona, then with Fabrizio Puglisi in Bologna, where attended to the multimedia composition seminars with Nicola Zonca at Studio Arkì. In 2004 he entered the doctoral program in Semiotics directed by Umberto Eco, and earns his Ph.D. with a thesis on improvisation in music. From 2010 he attended to the electronic music courses at the Conservatory of Bolzano (with Carlo Benzi, Massimiliano Viel, Nicola Baroni). 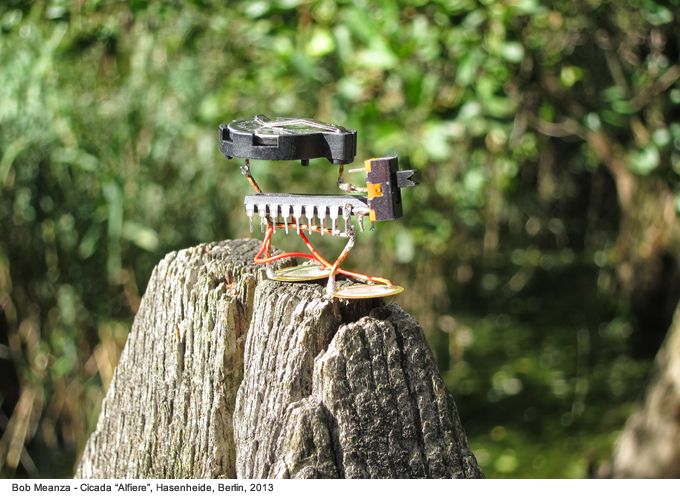 He has been working from 2012 with visual artist Marco Mendeni for an ongoing project on game art (“I’m not playing”, 2013), presented at Robot#06, Bologna and FILE, San Paulo, Brasil.

Ludovico Ristori: Hello Bob! Let’s start with a basic question: what’s for you “sound art”? How have you come to that?

Bob Meanza: For me sound art is just a broad field of action – luckily not yet well defined – that encompasses people who work creatively with sound. What we call “music” is a specification of this big category. But I am not even sure if I personally ever really “came” to sound art, in the sense that probably I still think like a musical composer, even if I am approaching a sound installation! I’m just looking for a wider set of sonic tools. And I guess I like working in a relatively young, hybrid space.

Ludovico Ristori: The sound in your work is generated by mechanical parts controlled by electronic components and not simply reproduced (using digital players, for example). Is there any particular reason behind this choice?

Bob Meanza: Speaking technically, sound reproduction always needs a mechanical part, a “transducer”. No matter what the signal is, to make it audible it you have to literally “push” it in the air, generating sound waves. And you can use anything to obtain this effect, from hi-fi loudspeakers to electronic relays, like I did. The interesting thing about this second option is that you are hacking a technology, thus enabling new connections. A neutral loudspeaker will focus you on the signal (a song, a speech). On the other side, a biased sound emitter has its own footprint, and will also focus you on itself, on the way it sits in the space and connects with you. In a way, it will give more life to the sound sculpture.

Ludovico Ristori: Your art imitates nature on the one hand but, at the same time, denies it emulating it with technological tools. The world today needs more of nature or culture?

Bob Meanza: The easy answer is of course that we need both of them! But we need to constantly update the way they’re interconnected. Artists have always had a central role investigating the nature-culture binomial, giving insights and previsions. It has always been like that, and today this constant renewal needs to be even faster, given the rising amount new and confusing possibilities. We need even more art to cope with that! Also because today categories melt unexpectedly: for example I could see a “natural” thing like an insect’s DNA as a sophisticated technology that I could try to imitate, like some alien equipment discovered on earth. At the same time, today a non-engineer like me can tinker with AVR microcontrollers (like the ones I used for Cicadas), with the same immediacy one would have working with wood. So I wouldn’t say that my robotic insects “deny” nature. Instead, it put an almost ironical accent on the brave new world of cooperation between man and nature.

Ludovico Ristori: Insects are often linked with the idea of repellency. For you there’s a difference if the insects are artificial, as in your work? If so, why?

Bob Meanza: Well, my insects of course look tame and controllable, because the artificial part looks unassuming. And they’re somehow warm, as they contain my sweet nostalgia of the mediterranean soundscape. But if you think of their sci-fi brothers, nano-robots that could get into our bodies (like in “The Diamond Age”), things get less reassuring. When insects are many, small and not immediately visible, we lose grasp on their movement and purpose. Insects can be overwhelming – as it happens with information and data today. That’s also why I’m longing to build a real swarm, big yet somehow hidden, capable of a sensorial overflow. 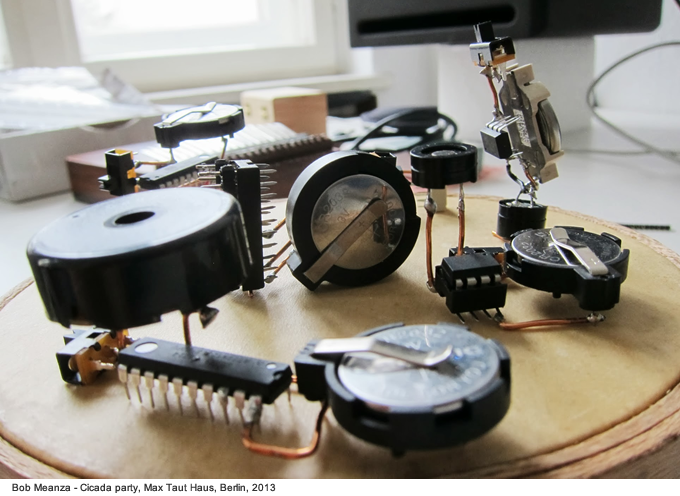 Ludovico Ristori: You presented us artificial insects which, together, interact and build a sound and an atmosphere. If I say “internet of things” what comes to your mind?

Bob Meanza: My first thought was “well, in the end you don’t need so much to simulate a network”! In the sense that my insects don’t have interactive faculties. They just go on their way. But it’s true, they can convey the idea of dialogue and intercommunication, just because they create patterns and textures. And that could be a good metaphor: fake networks that in the end are just busy chatter, and don’t contain real interconnection. But, still, for an observer they can convey a meaning.

Ludovico Ristori: The atmosphere you obtain is very immersive like (and probably more) than using the latest technologies, like virtual reality, augmented reality and many others. Your tools are, instead, very poor and almost retro. Why?

Bob Meanza: Well, the first reason is practical, I am humble artisan, I wouldn’t venture on engineering a virtual reality installation (at least, not alone)! The second reason is that sound is intrinsically immersive, because it interacts immediately with space. And we tend to forget it. We are struggling on immersive 3D visuals, but if the aim is “immersion” or “spatialization”, then there’s nothing more efficient than sound strategies. So, I really wanted to reduce the complexity of my insects in order to get instant spatialization. No cables, no sync, no AC power (I use batteries): I want to just drop the insects freely in the space to sonificate it. 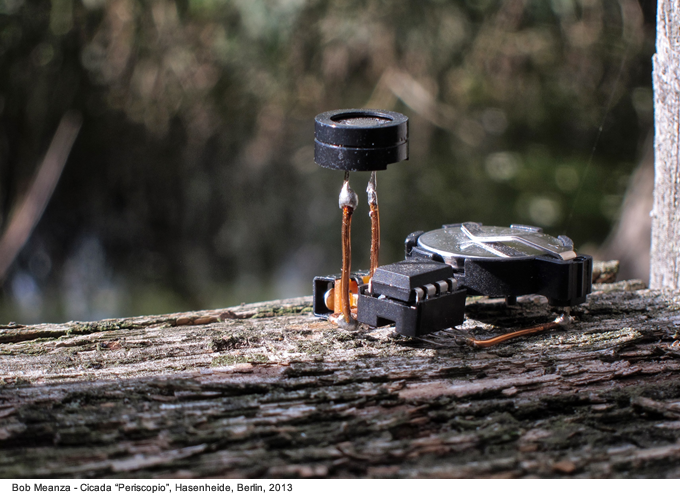 Ludovico Ristori: What do you think, considering recent advances in biotechnology and nanotechnology, about our possible future as a humanity 2.0 or cyber-humanity?

Bob Meanza: Hadn’t we already upgraded to 2.0? For example with eyeglasses or wristwatches? Was it man 1.9? I’m joking, because I tend to put every “next revolution” in a bigger picture. I’m much more fascinated in how man is always able to adapt to new contexts. That’s really our speciality, it’s a sort of constant upgrading, way beyond 2.0 or the like. And it’s very human, after all. Still, what puzzles me is the increasing speed at which all this is happening. We can get used to everything but…will there be a time in which upgrade processes will be so quick for their own sake, in the sense that no one will really keep up with them? Is that man 2.0?

Ludovico Ristori: Are you already working on a new project? Have you got any new interesting idea?

Bob Meanza: “Cicadas” is still in version 1.0. I think of it as growing project, with different breeds and directions. Apart from trying to build many more of them, and to experiment with interaction, I’m preparing to go even smaller: from insects to parasites! The new parasites will not be stand-alone, but the will need a “host” to draw energy from. Will they still look cute? We’ll see. 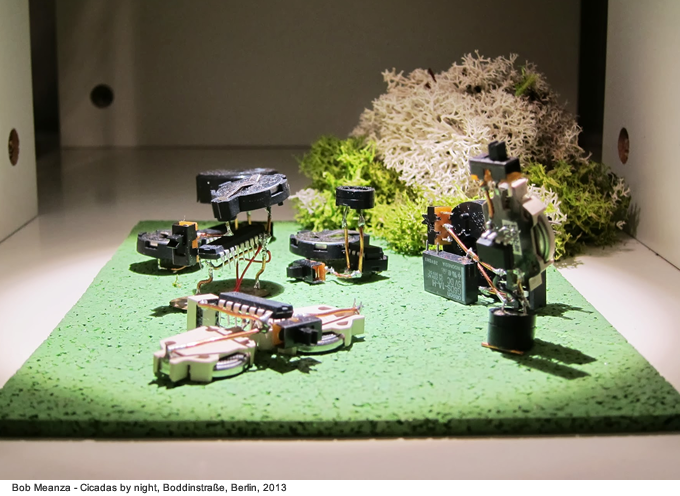 Ludovico Ristori: Out of curiosity, what kind of music do you prefer?

Bob Meanza: I like sound explorers, from the likes of Edgar Varèse, to creatives like Brian Eno. Living in Berlin, I’m following the scene of the radical improvisation (the “Echtzeitmusik”), where people strive to extend the sonic possibilities of their instruments. But I’m also totally fascinated by the really wild, experimental beats that are born in this city: awesome sounds that pop-up late at night in a club, maybe after hours of trite thumping, giving you the most unexpected aural experience.