Between design and sound: the feeling of touching according to Yuri Suzuki 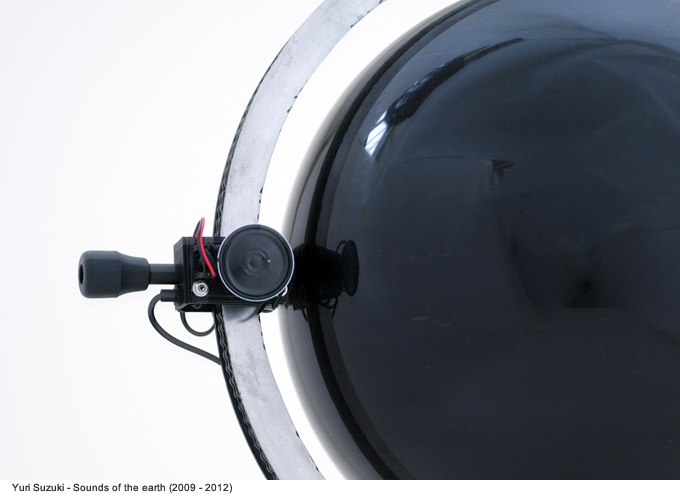 Yuri Suzuki is a designer and sound artist, born in Tokyo and currently based in the UK and Sweden.He explores the world of sounds using an innovative and challenging approach producing design creations and pieces, and  questioning in an unusual and original way the relationship between visual and audio data, as well as the aspects of visibility  of electronics. Suzuki also has a background in music and technology, disciplines that converge in his design research around sound.

Suzuki’s sound art pieces and installations have been presented in exhibitions all over the world. He gave workshops and lectures in different universities internationally.

Among Suzuki’s most relevant design creations, we should mention Color Chaser (2010), a sort of small device able to detect and follow a black line, drown among other colored lines; the RGB data are then translated by the chaser into sounds. This is a perfect example of the artist’s research about the interaction between colors and sounds.

Another significant work is Tub map radio (2010) a project commissioned by the Design Museum of London, aiming at showing the invisible dimension and hidden mechanism of a (electronic) device by making it visible.  The piece is based on a diagram created by the designer of the London Tube map, Harry Beck, which shows the lines and stations as an annotated electrical circuit. In this case too a non-visible input is translated into a visual work and the arts are able to provide an insight on the complexity of the contemporary surrounding environments. 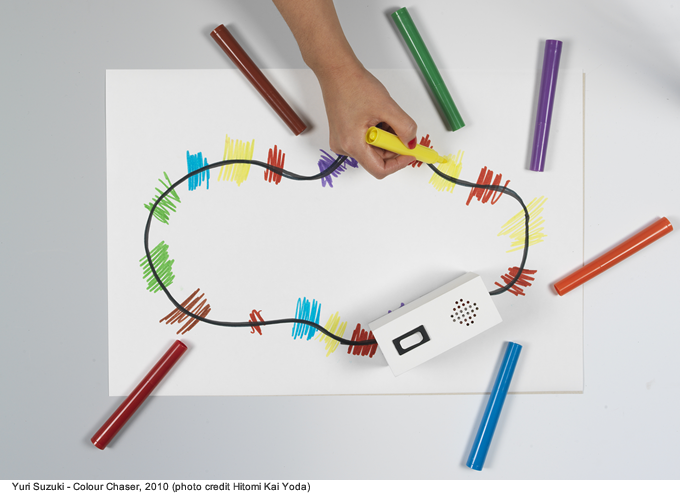 One of the latest project by Suzuki is Sounds of the earth (2012), a sort of spherical record project, where the different countries of the world are engraved in a little globe with a different sound that a needle passing over them, reproduces. The sounds performed are recordings, mostly folk songs and popular music, but also local speeches, collected by the artist all around the world.

Suzuki also presented his work during structured exhibitions, like Breakfast Machine (2009) in Amsterdam. He also produced musical releases, since music is an important dimension of his research. Among his musical works, we might mention Yellow Peril Disco Group/Bamboo Disco, mostly a work of funk, Moog disco and vocoder boogie sounds, where synths and electronics are also performed or MENTAL SX 150 with EDMX, where techno, record-playing toy trains and breakfast machines are mixed in an interesting product.

Sukuki is an eclectic artist, whose works explore the continuity and the dialogue between the realms of sounds and design, in a unveiling process of their structure and possible interaction. We contacted Yuri Suzuki in order to discuss with him his arts and projects. 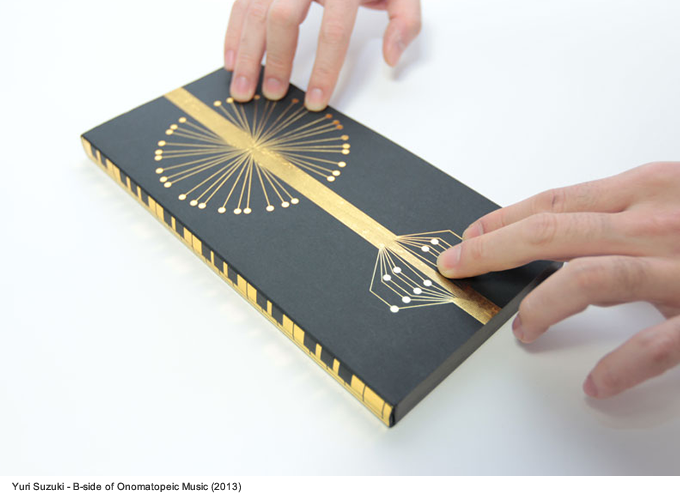 Silvia Bertolotti: What is the main project you are currently working on and what are your plans for 2013?

Yuri Suzuki: I am currently working at different projects and not all of them are personal, in the sense that they are collaborative ones. In particular, I’m involved in two advertising projects and also on a musical one. Added to that, I just finished my book “B-side Onomatopeic music” and it will be published this year. I will also spend few months in the US for work and research.

Silvia Bertolotti: What do you mean exactly with “visual sound design”? How did you get to this specific kind of genre and why is the visual aspect of sound important for you?

Yuri Suzuki: Well, I never created the expression “visual sound design” but we  can discuss “sound design”. I’m interested in the communication of design, which is more about presenting various aspects of sound and make them visible. I think it is all about how I can communicate a concept with image.

As I am also a designer, I need to show visually how the principles work. This visual and communicative aspect is quite important in design and it also pertains to advertising (or printing for example). I’m mostly interested in visual practice, in order to be able to combine visual elements and sounds.  This means to create attractive shapes, while keeping the initial creative inspiration. It’s all about expression.

Silvia Bertolotti: How do you “translate” exactly colors in sounds? What are the concept and technology behind this operation? I think about a work like Color Chaser.

Yuri Suzuki: We all know Mondrian’s Broadway Boogie Woogie (1943) and his color visualization of a music score. In Color Chaser I wanted to experiment how to play sounds with colors and how to visually understand sounds through colors. Actually a music score doesn’t’ work only with note, but also with timelines and directions of the sounds.

I created a small sensor-based device, sensor-detecting colors that followed a black timeline (direction of the sounds) but every time the timeline was interrupted with colors and the device detected it, it created music. It was like a composing music process through colors. It really helped people to understand how everything works, because of the visualizing act of the process.

Silvia Bertolotti: How important music is within your creative activity?

Yuri Suzuki: Music is very important to me. My background is in the music field and I also produced music in the past. Music is often present in my works and also my new book will be about music. 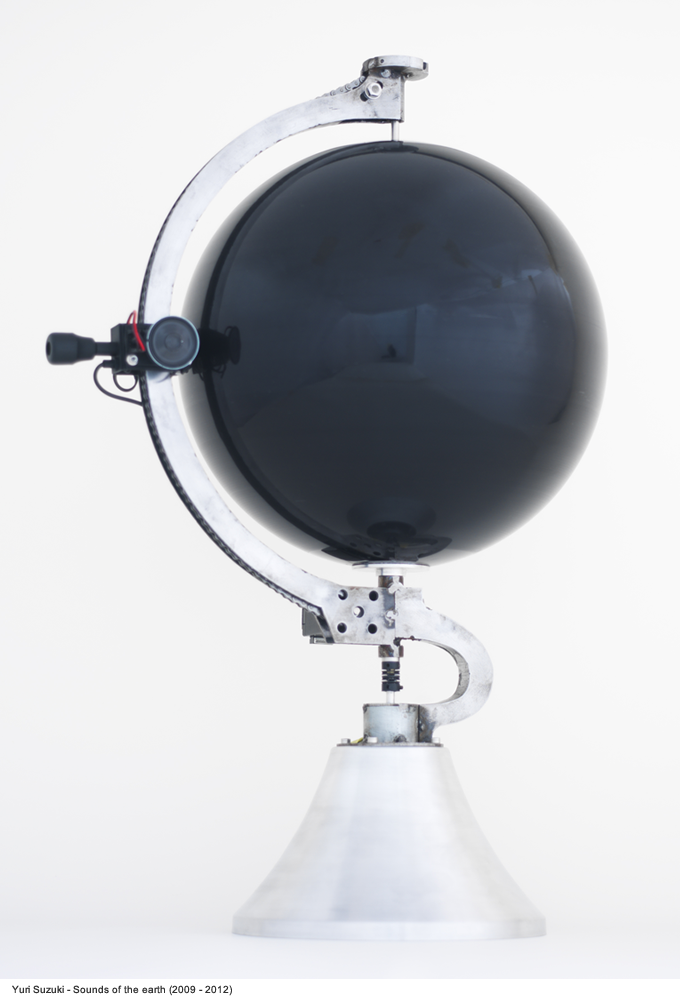 Silvia Bertolotti: What is the main challenge for design in a world where virtuality replaces physicality and material supports seem to be less and less important?

Yuri Suzuki: I think I have a different opinion. If we consider the field of music, the whole creation process takes place within a computer, everything is computer based and consequently people tend to leave behind physicality, they miss touching the devices and the instruments.

This material aspect is very important in design. Physicality and touching are essential, so a computer based design is not only about computer. This can be partially true for music, as we previously said, but for design materiality and “the feeling of touching” an object are important. Concerning music, a CD or a vinyl gives you access to your memory and visual sensations (for instance in looking at the cover or touching the material support) and this experience is not provided by a mp3 track.

Silvia Bertolotti: What is the role of technology in your creations? I think about works as Denki Puzzle or Tube map radio? Do you think it is more a threat or an opportunity?

Yuri Suzuki: I don’t think technology is really a relevant element to my work. Technology is just a tool, a means that can help in convey and express an artistic idea, but it is not more than that. Expression and communication are important in my work. So for sure technology is an opportunity, but it doesn’t have supremacy in my projects. 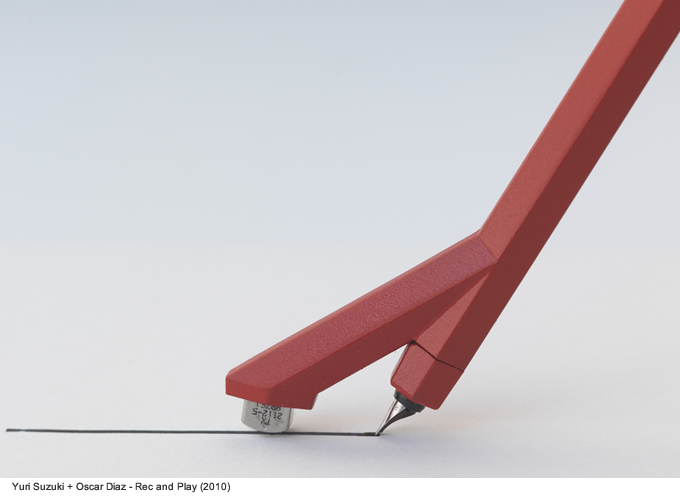 Silvia Bertolotti: What is the main purpose of turning everyday objects into something completely different?

Yuri Suzuki: When you study design you usually focus on shapes and material. I’m also interested in communication between people and objects, a sort of interaction design.  My works often aim at exploring how we communicate with an object and what are the different modalities of interaction.

Silvia Bertolotti: I saw you have a blog and a twitter account. How important is for you the interaction with your audience?

Yuri Suzuki: With blogs or social media you have the opportunity to communicate and be in touch with an audience that you cannot reach in your daily life. I can communicate with someone I never met and reach persons who are not part of my daily life. This is why I think social media communication has a dramatic importance in my work. 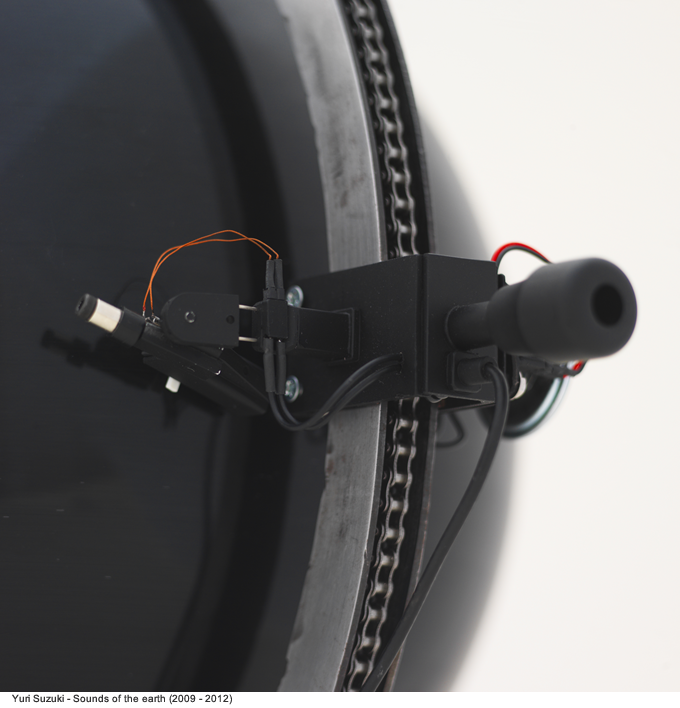 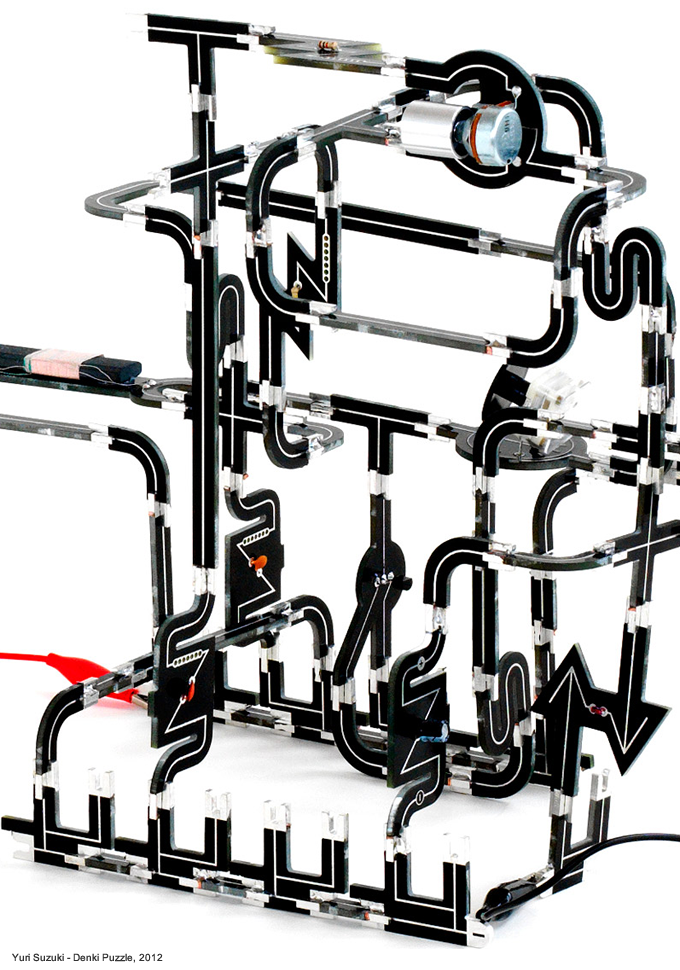 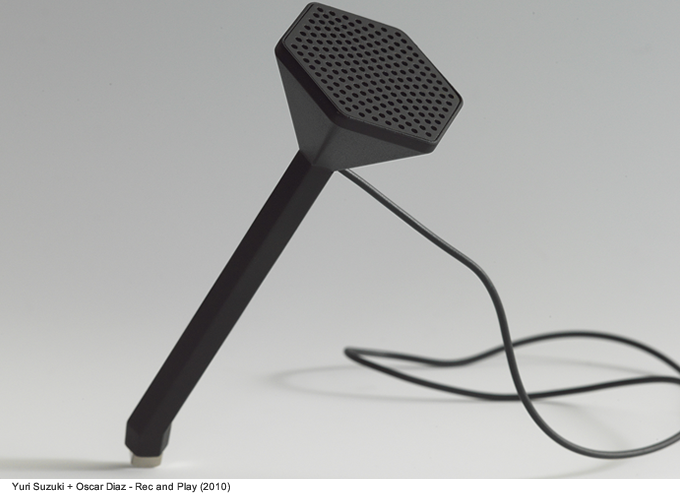 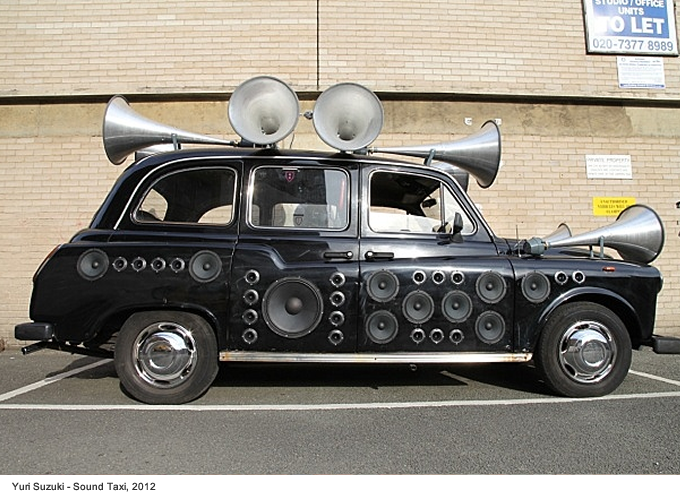 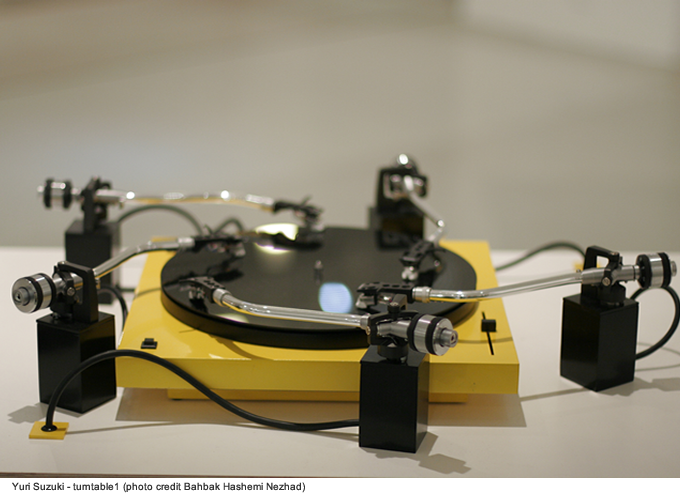