Bernie Lubell A Theory of Entanglement 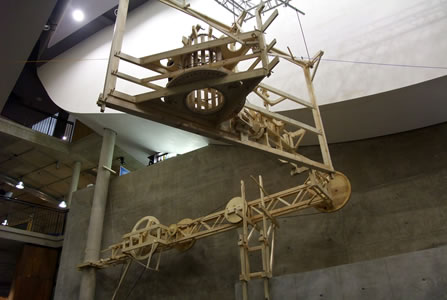 As part of its UNsustainable year, FACT (Foundation for Art and Creative Technology) will present the first UK exhibition by award-winning San Francisco-based artist Bernie Lubell.

FACT will unveil a major new commission by Lubell and bring together a series of his low-tech, lo-fi sculptures, powered entirely by the audience. Visitors will become part of the exhibition as they work together to animate the large-scale wooden mechanisms, creating a theatre for themselves and one another.

Lubell uses the work of French scientist and chronophotographer Étienne-Jules Marey as a starting point and inspiration. Marey’s work captured and studied the movements of the body, from the limbs to the heartbeat, which led to significant and pioneering developments in cardiology, aviation and cinematography. Lubell adopts this body of
work to examine the human as a machine, an area he became interested in when he suffered from heart problems.

The new commission “A Theory of Entanglement” (2009) will hang in the FACT atrium with a giant wooden construction that requires visitors to bring it to life. By pedaling bicycles connected to a large, overhead wooden machine, the audience will collaborate in the crocheting of a large knot that will gradually descend from the ceiling towards the floor.

This ambitious installation alludes to an intriguing aspect of quantum mechanics whereby sub-particles with a shared history will always act in sync, even if they have no means of communication. The piece will bring to mind connections with the Northwest textile industry and rope-making history of FACT’s Liverpool location, as well as referencing industrialization and the computer. 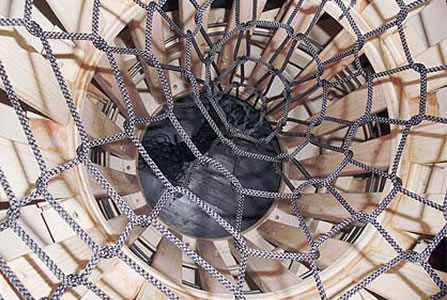 In Gallery 1 and Gallery 2 a selection of Lubell’s previous works will be exhibited, including:

“Conservation of Intimacy” (2005)
A large-scale wooden machine, powered by two people rocking on a spring-loaded bench.

and the “Synapse Sweetly Singing” (2003)
A model of the human brain, based on a network of tin can telephones and a wooden coffin.

“Etiology of Innocence” (1999)
A hand-cranked installation and clockwork recording device.

“Cheek to Cheek” (1999)
A stool where the visitor can sit and dance with themselves ‘cheek-to-cheek’.

“Aphasiogram” (1999)
A machine charting the visitor’s route to heaven.

“A Prurient Interest” (1999)
A windowless box containing an itch you can never scratch.

In addition, The Media Lounge will play host to a comprehensive public programme encouraging visitors and communities to explore key themes and their own creativity using a variety of arts and digital media based workshops and artist-led events and initiatives.

Lubell has exhibited internationally including Ars Electonica, Linz (2007) where he received the Award of Distinction for Interactive Art.

1) This exhibition is delivered in collaboration with V2_, Institute for the Unstable Media in Rotterdam.

3) In 2009, Liverpool’s Year of the Environment, FACT responds with UNsustainable, i ts own theme for the year. FACT asks: is the way we live  UNsustainable? Examining sustainability from an artistic perspective in a series of exhibitions designed to illustrate how humans can be invested in the change needed to protect our civilization. Is society itself becoming unsustainable?