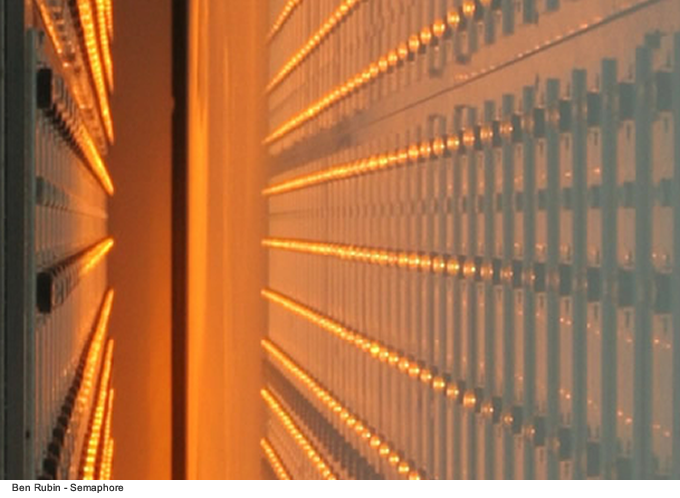 The public is invited to join in a code-breaking competition sponsored by Adobe. The artwork, commissioned by Adobe and the City of San Jose, first illuminated the San Jose skyline in 2006. It is based on the semaphore telegraph system developed in the 18th century. Installed atop the 17th floor of Adobe’s Almaden Tower at the company’s headquarters campus, San Jose Semaphore features a series of four 10-foot-high LED-lit disks which rotate to display a series of simple geometric symbols that transmit a complex coded message.

Rubin created the artwork’s coded message using algorithms similar to those used in World War II-era cryptography. The launch of the new message follows a renewal of the project by Adobe, which included a restoration of the work’s LED light system. San Jose Semaphore highlights the city’s growing digital business epicenter, as well as its new media art community, which is undergoing a renaissance in part through the support of public art by the San Jose Office of Cultural Affairs and local corporations like Adobe. 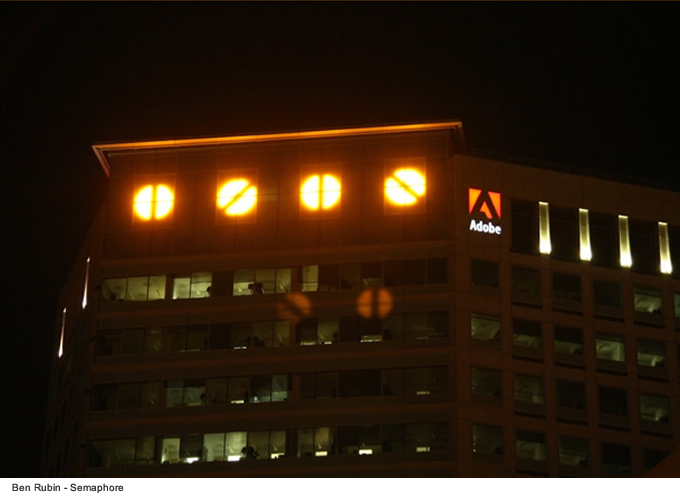 San Jose Semaphore‘s initial coded message was deciphered in Fall 2006 by two San Jose area research scientists. They revealed the encrypted message to be the complete text to Thomas Pynchon‘s 1966 novella The Crying of Lot 49. For the current code-breaking competition, Rubin has developed a new code and message. The first individual or team to crack the new code will each receive a one-year subscription to Adobe® Creative Cloud™. Learn more about the project and competition here.

Ben Rubin (b. 1964, Boston) is a media artist based in New York City. Rubin’s work is in the collections of the Art Institute of Chicago; the San Jose Museum of Art; and the Science Museum, London, and has been shown at the Whitney Museum of American Art, New York; the Reina Sofia Museum, Madrid; the Fondation Cartier pour l’art contemporain, Paris; and the ZKM Center for Art and Media, Karlsruhe. Rubin has created large-scale public artworks for the New York Times building, the City of San Jose, and the Minneapolis Public Library. He has recently developed a site-specific sculpture for the Public Theater in New York and just completed a luminous rooftop sculpture commissioned for National Museum of American Jewish History in
Philadelphia. Rubin received a bachelors of art from Brown University in 1987 and a master of science from the MIT Media Lab in 1989. Mr. Rubin has taught at the Bard MFA program and the Yale School of Art, where he was appointed Critic in graphic design in 2004.