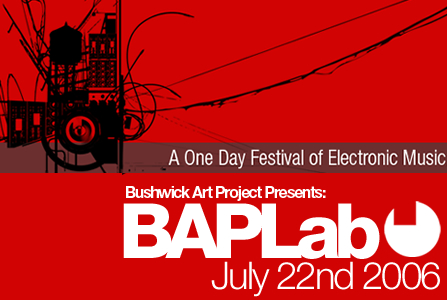 Culling artists from the rosters of the MoMA, The Whitney Museum, and the Venice Biennial along with musicians from labels such as M-NUS, Line, Kranky, Ghostly International and Clink Recordings, BAPLab is featuring over 80 musicians, performers, visual artists, new media installations and DJs side by side. BAPLab is a call to arms to the disparate tribes of New York’s digital-futurists, drawing together from among the best and the brightest of a new generation of artists and musicians.

BAPLab provides attendees with a snapshot of the contemporary digital and new media arts scene, with an international roster of both emerging and established artists such as Guy Ben-Ner and Benton-C Bainbridge . The atmosphere is part high tech museum and part digital community workshop, opening participants, not just contributors, to a free-form dialog on evolution, technology, and identity in this modern era. Consider two fledgling yet world-class events, a junior Sonar and a cosmopolitan Biennial-in-training, and you have BAPLab.

In contrast to the BAP Fall Festival 2005, which drew over 4000 people and was anchored by dance music legend John Tejada, this year’s installment focuses on emerging talent – the hungry generation destined to knock down doors in the near future. The BAPLab seeks to become an integral part of moving this upcoming pool of talent forward to a position of prominence by developing a symbiotic network of creative expression and high profile spectacle.

BAPLab also hosts over 40 sound, video and new media artists. Among the talent presented this year is video artist Guy Ben-Ner, who recently represented Israel at the 51st Venice Biennale. Curated spaces by electromagnetic arts collective, free103point9, present an exploration of Transmission Arts, featuring air-wave invading installation works by artists 31 Down, Paul Davies, and Tarikh Korula. The full roster boasts artists who have exhibited in venues from Reina Sofia in Madrid to the ICA in Philadelphia, the Contemporary Art Center in Cincinnati and the MoMA here in NYC, all the while giving equal time and exposure to the lesser known community of experimental geniuses who inhabit the far reaches of Bushwick and beyond.  New art and new music, a perfect point-counterpoint to the digital revolution. The BAPLab will envelop you in a day of wonder, amazement and celebration. Do not miss this event.