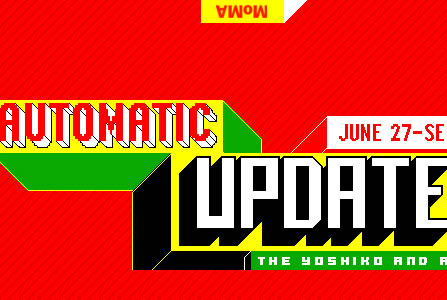 The momentum of the dot-com era infused media art with a heady energy, artists, many switching from analog to digital equipment, tried their hands at a range of newly invented art forms. They built interactive installations, electronic publishing networks, and art for the Internet. Technology evolved so fast that in some cases an art form may have disappeared while an artist’s work was still in the making.

By the year 2000, this quasi-revolutionary aura had dissipated and media art had settled into the mainstream. Automatic Update features several installations from this later period. They are mature works that ease the somber mood of the times with entertaining presentations. Nevertheless, their humor does not soften their biting commentary on our social milieu. What at one time was Pop art has now become pop life.

The exhibition is organized by Barbara London, Associate Curator, Department of Media.

A related series of films and videos is screened in the Titus Theaters from July 7 to September 2.