Artland Tales from the forest 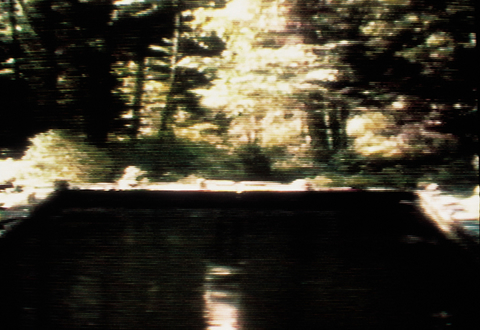 An exhibition about the forest in the outskirts of our consciousness; the forest of our memories and fantasies. We spend less and less time in the forest and sometimes it appears as unreal or even frightening. Many people prefer to spend their time in virtual worlds where they feel safely connected to others. We experience nature on the television where it doesn’t smell, feel or taste at all. Yet, the woods and the trees have a powerful symbolic force and meaning.

Can we listen to the tales and incantations of the forest in an increasingly nature-dystopian world where the forest perhaps isn’t permanent? Can the forest function as a metaphor for life? To get lost, to merge or to transform or disappear into the forest? Where is the boundary between the wild and the arranged? Memories, dreams, visions and reality mingle. What it the relationship between human and nature?

Tales from the Forest is an exhibition with suggestive features and with different stories about and from a surreal, scary, casual, poetic or foreign forest within and beyond us. What place do you and I have?

Bill Viola shows the video installation “The Reflecting Pool” from the end of the 1970s, starring green leaf trees reflected in a water basin and a man. Trying to become one with the surrounding forest, to dissolve and disappear into it is part of the work. The installation is an existential poem, a metaphor for human life or a composition that starts again. The transition between tranquility and movement, between time and transformation, can be seen in the mirrors. Illusion, reflection or reality?

In the British duo Igloo’s interactive computer installation “Summerbranch” we enter a mixture of a real and a created 3D forest. Ruth Gibson and Bruno Martelli play with our vision in an illusion in which visibility and invisibility baffle us. With the help of computer game and motion capture technology, 3D photos and special effects, they portray the environment in a borderland between reality and virtuality. 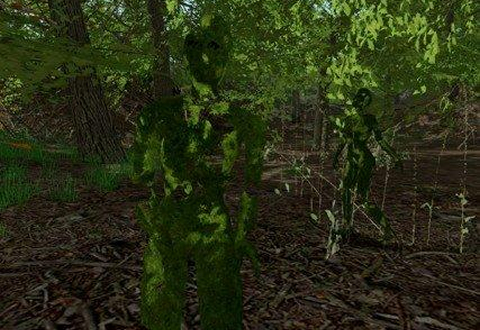 Levi van Veluw creates new dimensions to the traditional traditions landscape painting and self-portraits. Using videos and photographs he disguises his own face with hard shells of various types of wood or allows trees to grow from his head in works, which are both performance and video or photo. Are they borderland figures between forest and civilization?

“Welcome to the jungle” is the title of the photographs by Bo Christian Larsson, including a series from a performance with the same name. His mysterious longhaired protagonist embodies the forest as a refuge and safe place and the forest that we fear at the same time. The forest as a place and possibility for transformation? Bo Christian Larsson says we are both part of and, at the same time, outside nature.

In the three-part video “Up and About again” Maarit Suomi-Vännänen has directed an entirely snow-covered and “blind” Datsun 100A which drives alone through different types of summer landscapes, orchestrated by everything from punk music to kantele. From dystopia to lush forest. It is sad and humorous at the same time. Tree felling was one of the most common occupations in Sweden and Finland just over a hundred years ago. In Suomi-Vännänen’s works, we follow the couple at their summer cottage. They are about to cut down a pine that spoils the view.

In the work of Maria Duncker, the young hooded man creates his own company with his chain saw among falling tree. Maria Duncker invites us into the world of trees, full of humour, surrealism, playfulness, rhythm and poetry in her five different video works. Pines that we think can only sough and creak start talking to passing cars and a baby spruce sings a love song.

Hanna Ljungh’s main character walks decidedly up to a fragile birch tree standing all alone in a place with sweeping views over a forest and a community. She pulls furiously and tenaciously at the birch tree to fell it. The video “Retaliation” is a filmed performance based on Ingmar Bergman’s film the Virgin spring, which in turn is based on a medieval ballad and gives Ljungh’s video layers of layers of meanings.

In the diptychs “Scenographers’ mind” by Eija-Liisa Ahtila we are faced with forest habitats on the outskirts of civilization. We are lured by fragments from the stories, but are interrupted by Ahtila as if she wanted to reveal the illusion of a story, look here, it’s just a stage setting. Ahtila chisels out environments that become metaphors for mental states. The environments are dreamlike and shabbily everyday with melancholy and loss as ingredients.

The tension between documentary, fiction and reality are also in Tova Mozard ‘s photographs. In the work “Cliftons” a woman stands next to a mural of a dense forest. The woman is devoured by and on the way into the forest and her mood fills the photographs. The illusion is there, but is temporarily lost by the sign with a request to only spend 45 minutes at the café table. The scenery is in place, the clapperboards are struck, and the story can begin.

The fragile and barefoot men dressed in white in the photographic series “alongside us” by Maria Friberg seem out of place in the large canopies, but they don’t appear to be interested in coming down either. Enigmatic they personify the longing for a different place of refuge or the forest and trees as habitat. Bare, leafless dark silhouettes of trees, along with a single man illustrate the opposites of nature and culture, or is it a kind of fusion of reciprocity and dependency we can see? 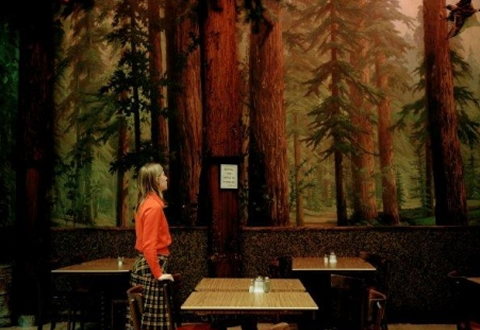 In his series “Suicide Forest”, Ari Saarto has photographed the vast forest Aokigahara Jukai in Japan. If you have entered the forest you will never get out again, says the myth. Each year fifty individuals commit suicide here and the authorities mark the locations with red nylon strings to be able to find their bodies. The landscape is loaded and we project the presence of humans, memories and disappearance. Ari Saartos works borrows the traditional landscape picture format, but has a social message, without a single human visible.

In the digital collage and slow motion video by Anita Malmqvist we meet dystopian landscapes, executed after Sweden’s largest natural disaster in modern times. The Red summerhouse is the sole survivor of the storm Gudrun’s fury and becomes a metaphor for a human figure. Human order and the wild is interwoven, a red lawn-mower has been left behind in the middle of cutting the grass and the Advent star in the window no longer shines.