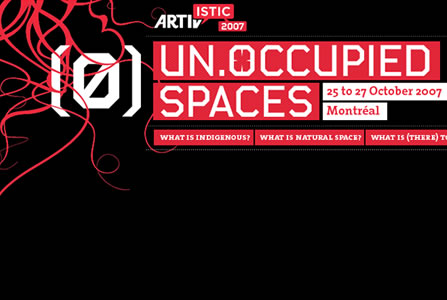 Artivistic is an international transdisciplinary three-day gathering on the interPlay between art, information and activism, from 25th to 27th of October, at temporary headquarters at 5455 av. de Gaspé, #701, and in different venues and spaces of Montreal.

Artivistic emerges out of the proposition that not only artists talk about art, academics about theory, and activists about activism. Founded in 2004, the event aims to promote transdisciplinary and intercultural dialogue on activist art beyond critique, to create and facilitate a human network of diverse peoples, and to inspire, proliferate, activate.

For the third edition of Artivistic, the expression [ un.occupied spaces ] was chosen to stimulate new ideas in response to the hidden confusions caused by the infinite networks of 21C globalization and neo-liberalism. [ un.occupied spaces ] dares to link the charged issues of environmentalism, indigenous and migrant struggles, and urban practices together through the angle of occupation. In an interconnected world, critical thought and action cannot but become flexible and uncompromising at once.

To think with occupation consequently becomes a strategy for approaching these issues in a way that will reveal their interdependence, and fuel creative and tactical collaborative actions between “co-artists” (artists and non-artists). Built around three interrelated questions, the event consists of roundtables, workshops, interventions, exhibitions, performances, and screenings.

The very use of the term “indigenous” presupposes a claim to the existence of certain rights. The right to traditional uses of territory. The right to live on the land from which one has been displaced. The right to status. The right to self-determination. The right to a life with dignity. In what context does indigenous mean something and how is it represented today? What is the relationship between identity based on place, the land and/or territories and the right to resources? What is indigenous in the context of globalisation, migrations and mobility?

The environment is in a pretty bad shape. Yet, does not typical environmentalism often propose “solutions” which alienate the very people that could make a difference by using a false dichotomy (natural/artificial, nature/culture) and by perpetuating the myth of a pristine nature? Current strategies often make use of fear and guilt to provoke action, yet will we not be helping our environment in a more efficient way once we let go of our arrogance as humans and start living with and in the world rather than of, and alienated from, the world?

The term “occupation” often inspires images of invasion, enclosure and rape. How are spaces and bodies ruled over? What is public space, ultimately? Why do reserves exist? To ask what is occupation is in fact to ask what is left to occupy for occupation is more pervasive than it first appears. At the same time, occupation echoes resistance when it comes to certain forms of appropriation. How does one occupy appropriation or how can one appropriate occupation?

Artivistic also includes an open-source component. Participants will be able to sign up on the day-of to hold an ad-hoc session that is not in the official program but is fully part of the event. You can prepare in advance, but you don’t need to submit anything.