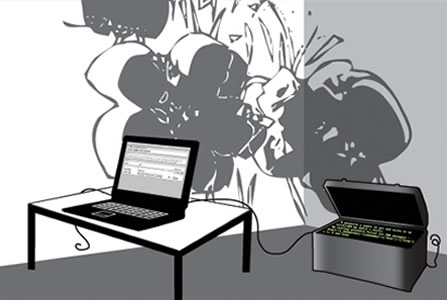 The exhibition Art Machines Machine Art , jointly conceived and elaborated by Katharina Dohm of the Schirn Kunsthalle Frankfurt and Heinz Stahlhut of the Museum Tinguely , Basel , opens with a presentation of Jean Tinguely ‘s drawing machines dating back to the 1950s followed by art machines down to the present day; all of these have a common feature: they produce their own art. These machines created by Angela Bulloch , Olafur Eliasson , Damien Hirst , Rebecca Horn , Jon Kessler , Tim Lewis , Lia , Miltos Manetas , Cornelia Sollfrank , Antoine Zgraggen and Andreas Zybach transform the Museum Tinguely, Basel, into a production hall.

To create a machine as an artwork and to entrust it with the responsibility of developing further artworks is a radical step. It means delegating creativity to a piece of equipment. Do such art machines then possess a “soul”? Indeed, they develop a dynamic of their own and enable the creation of an artwork that is an independent work  but they lack the capacity to lead the work to its conclusion. The machine with its automatic process does not posses the faculty of decision nor the possibility of selection. What is produced are mechanical works of art lacking the factor finality, but they are nevertheless a fundamental avowal of and testimony to the sovereignty of the machine and the basic belief in the possibilities of creative production beyond the act of the individual.

Jean Tinguely works raise the issue of the machine as an independent creative apparatus in the most original manner. His Méta-Matics that were first exhibited in Paris in 1959 and earned him his international renown are motor-driven drawing machines that enable the spectator to produce abstract drawings. The discrepancy between the material character of the Méta-Matics and their function, which is to produce art, can well be interpreted as an ironic comment on the overriding belief in those days in technical progress. It further also translates a reflex of the art context of the 1950s: the mechanically produced drawings are in keeping with the Tachist style in painting and thus reduce ad absurdum the idea of gestural abstraction as the direct expression of an artistic individual. This work group doubtless forms the historical basis of the exhibition. Grouped around it is a selection of works that share a common trait: the creative act is delegated by the artist to the machine  a process that was only possible at the end of the second world war when a generation of young artists appeared on the scene and broke with one of the best kept taboos of European art: the concept of the original work of art. The selection reflects this process in the most various art media such as painting, drawing, sculpture, video and ends with the greatest “art machine” ever, the World Wide Web, without, however, affording a definitive answer. 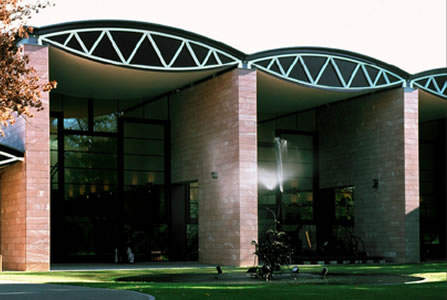 The visitor to the exhibition will encounter machines such as Rebecca Horn’s Preussische Brautmaschine and Michael Beutler’s installation Proper en Droog that concluded production before the exhibition’s opening, whereas Roxy Paine’s SCUMAK #2 produces throughout the duration of the exhibition, in this case organic-like sculptures. The drawing machines Making Beautiful Drawings by Damien Hirst and The endless study by Olafur Eliasson both require the involvement of the visitor and pose the basic question as to the relationship between onlooker and artwork. Whilst a physical phenomenon is at the source of Eliasson’s work, Hirst addresses the issue of the creative genius. Andreas Zybach’s Sich selbst reproduzierender Sockel contrary to its title does not auto-reproduce but requires an input by the visitor in the same manner that Angela Bulloch’s Blue Horizon needs an external impulse to begin drawing.

The relationship between artist, artwork and onlooker is the theme, but not always at the basis of all the exhibits. The art machine enables furthermore the participation of the public and mass-produced art, thus breaking significantly with the aura of non-reproducible art. Even though the onlooker is not directly involved in the creation of some of the works, he/she does gain an insight into its production and is thus led to reflect on the issue as to where the work of art begins. The artist, however, will never disappear completely from the work of art. The art machine remains a tool as long as it functions within the parameters of the artist. It is only if and when it starts to act independently and react to situations autonomously that the whole question of authorship can change. The creativity of the art machine is apparent only when it works without control and haphazardly. The machine may be able to produce without the presence of the artist but it cannot exist without the artist’s concept.