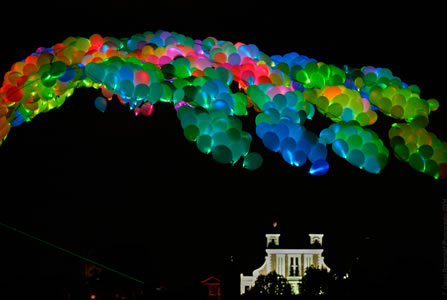 ArtFutura, the digital arts and new media festival of reference in Spain announces the celebration of its sixteenth edition, which will be held next October. The festival will offer a wide range of activities between the 27th and the 30th of October – workshops, conferences, performances, special presentations and a powerful audio-visual program – all of which will take place at the Mercat de les Flors in Barcelona.

Whilst in the previous edition ArtFutura covered the superposition of both the virtual and the physical world, this year the festival will explore the future of objects and environments in the age of data flows.

The series of talks “Living Objects + Sensible Spaces”, will be inaugurated by a special guest: the American thinker and novelist Bruce Sterling , one of the most important science fiction writers of the last two decades. In his new essay Shaping Things , Sterling speculates on the future fusion between interactivity and industrial design, that will provide the everyday objects that surround us with memory and identity.

Other participants will be the MIT MediaLab investigator Hiroshi Ishii , founder of the ” Tangible Media ” concept, the interactive systems that regulate themselves via the manipulation of everyday objects, and the architect Usman Haque , author of the impressive installation ” Sky Ear ” , a great cloud of globes that scan the data transmissions that cross the city.

In addition ArtFutura will present for the first time in Spain the amazing “Strandbeest”  (Creatures of the Beach) by the Dutch Theo Jansen : immense robotic sculptures that use wind power as a source of energy.

ArtFutura 2005 always counts with the presence of great personalities of the digital arts industry. This year, the protagonists of the digital animation and special effects section are, among others, Industrial Light and Magic and Grangel Studio .

The Argentinean Pablo Helman , visual effects supervisor at ILM , will analyze the last productions of the George Lucas special effects studios, Episode III of Star Wars and ” The War of the Worlds” .

On the other hand Grangel Studio works from Barcelona creating characters for Hollywood films such as the recent “Madagascar”. Its next project is ” The Corpse Bride “, the new Tim Burton film, which will be released in October and will be presented in exclusive preview at ArtFutura.

In the digital entertainment and videogames section, the festival will count with the presence of Tetsuya Mizuguchi , one of the most innovative designers in the Japanese industry. Author of classics like “Space Channel Five”, “Shenmue” or the musical cult game “ Rez “, Mizuguchi will present ” Lumines “, one of the first videogames created especially for the PSP portable console.