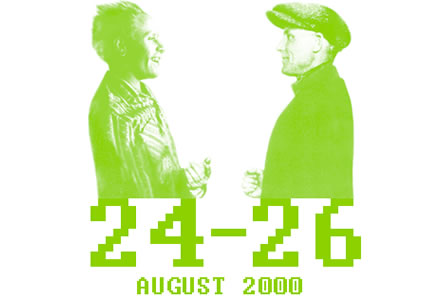 In 2006 The Art + Communication festival, organised by the RIXC in Riga, celebrates its 10th anniversary and the 8th edition. For the first time the festival is conceived as a large-scale exhibition Waves, that looks at electromagnetic waves as the principle material – the medium – of media art.

The exhibition brings together about 40 international works of (media) art, in which electromagnetic waves are seen not just as carriers of information, but as the material and/or theme of the artwork.

The artists of the Waves exhibition are challenging conventional knowledge about and perception of waves. Electronic media such as radio, TV and the internet are of defining influence on today’s societies. Subsequently the information sphere is tightly controlled and subject to various artificially imposed political limitations. Yet artists with their electronic and digital DIY kits are exploring numerous ways of thinking outside the box, making their own waves, creating alternative networks and engaging with strange scientific phenomena — which points at actually existing utopian potential.

The artworks on display at the Waves exhibition cover a wide range of topics. Some of the works engage with interesting scientific phenomena to provide unusual aesthetic experiences such as listening to the background noise of the universe (Franz Xaver) or engaging with the visual and aural qualities of light bulbs (Artificiel). As the human sensory perception system gives us only limited access to electromagnetic waves, sonification and visualisation of scientific data are a major component of the exhibition. Other works explore social and political implications of wave regulation (Julian Priest, Bureau d’Etudes) and offer viable alternative communication systems (Marko Peljhan).

Those are just a few examples out of a large scale exhibition which interrogates the conventions of media art exhibitions. Whereas some works are based on screens and audio-visualisations of waves, many works rely on physical objects (Joyce Hinterding, David Haines), obscure or forgotten communication technologies (Paul De Marinis) and the antenna as an art object. Bringing together experienced and well known artists with young experimentators between art and science, Waves makes a statement by being the first large scale international exhibition to focus uniquely on waves as the material and medium of art.