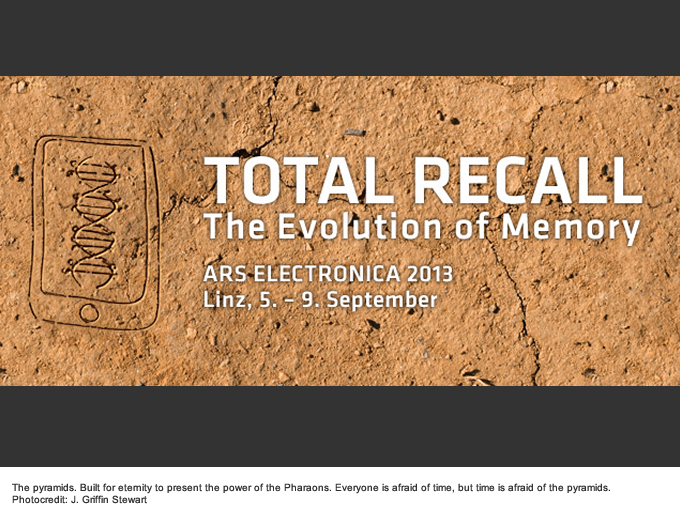 One of science’s most coveted secrets and one of humankind’s greatest technological challenges will occupy the focal point of the next Ars Electronica Festival September 5-9, 2013: memory and its storage. What is remembrance? How is information saved to memory and how is it lost—in nature, in technology, in the future?

TOTAL RECALL is the theme of Ars Electronica 2013, a search for the perfect memory. We’ll ask neuroscientists and computer engineers, artists and philosophers about their approaches, about the latest finding and their interpretations of them, and about their plans and visions of a future in which we’ll be able to save everything to memory. But just how does one go about performing research on recollection, and how much progress have we made? What’s connectome research, and what in the world is a Jennifer Aniston neuron? How is a memory formed in the human brain and how is it lost? Are there prospects of someday being able to heal or even prevent dementia and Alzheimer’s disease?

When everything about us is saved to memory, interlinked and accessible to everyone 24/7, what sort of society will be the upshot of this? And to whom will all these memories then belong, and who will be earning a fortune with them? Will forgetting be a human right someday? Which policies of remembrance will we institute and enforce? What are the most important current projects and visions to save humankind’s cultural heritage and to conserve it for posterity? What methods will be used in the future to accomplish this? Is it possible to implement a storage method that’s reliable not just for centuries but for millennia, and why do we actually want to do this? 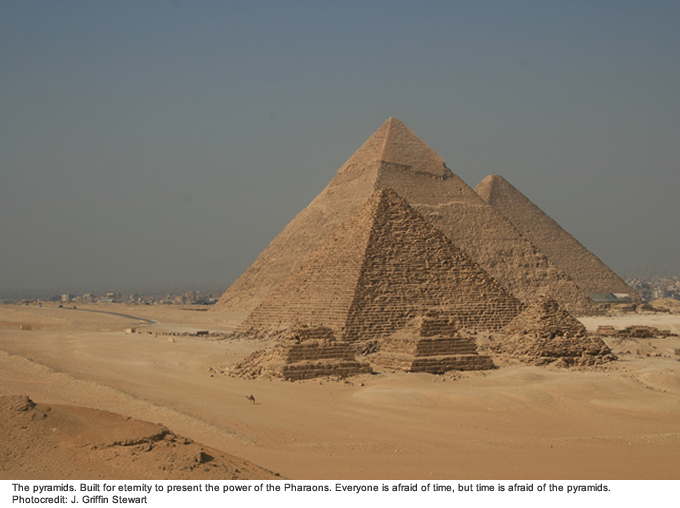 Here are a few facts & figures and comparisons as a sort of lead-in to our dealings with this topic: This is a byte: 01000001—eight combinations of 0 and 1 yield 256 permutations. This one, for instance, represents the number 65 and is ascribed to the letter A. This binary method of expression—one that’s been known since the 3rd century—is a simple, efficient means of storing any type of information in digital circuits.

There are 1,048,576 such bytes in a megabyte. Writing a megabyte of text takes no fewer than 8,388,608 keystrokes. With an average-sized font (like the one you’re reading now), you can get about 5,500 characters onto a standard A4 page, so printing out that text would take 1,525 pages. And that’s all of 1 MB, which is much less than any cell phone photo and no more than six seconds of music on a CD. 6 MB was the size of the programs written at IBM for the moon landing (“the most complex software ever written”), and thus the equivalent of two snapshots taken by a modern smartphone.

The human genome constitutes 800 MB of data; a clever programmer could express the portions that differentiate individual humans from one another in 4 MB. The quantity of data that humankind has stored to memory so far (i.e. not just created but saved to some medium that still makes it accessible, and yes, including the clay tablets that are still around) is estimated at 2.7 zettabytes, and of course it goes without saying that less than 1% of it is in non-digital form. 2.7 zettabytes has 21 zeroes on the end; connecting the sheets of standard paper needed to print it out would produce a band that could be wrapped around the world 500 times.

In 2007, the number was a mere 295 exabytes; the breakthrough of the 1 zettabyte mark is reported to have occurred in 2010; and the prognosis for 2015 is 8 zettabytes. By 2016, there’ll be so many videos put online every month that it would take 6 million years to view them, and the amount of data put online in that year alone will exceed the total amount stored to date. The latest methods in biotechnology have already successfully been used to store digital information in DNA. This will make it possible to store 100 million hours of high-definition videos in a single cup of DNA. 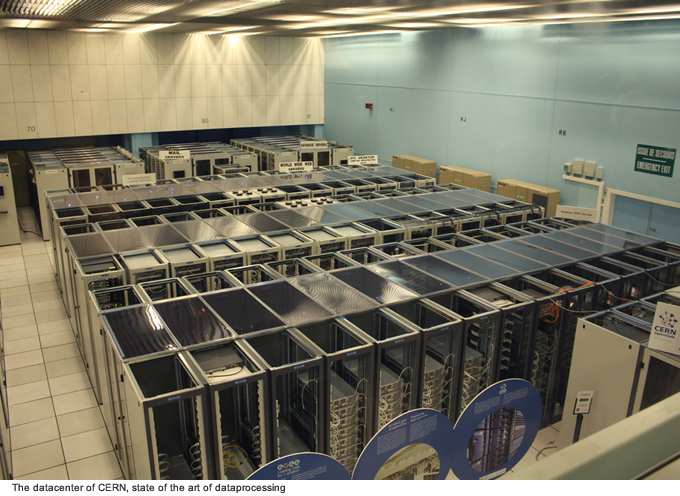 But what are we going to do with all this data, and what differentiates saved data from remembrance, from memory? What is memory, actually? How do neuronal networks function—from the simplest forms of life to the super-brain of Homo sapiens? Nature’s perfect memory is DNA, which it uses not only for self-replication but also for evolution. But isn’t every hydrogen atom ultimately a 100% exact and perfectly accessible memory that preserves the moment immediately after the Big Bang (380,000 years ago, scientists say) when the universe had cooled down sufficiently so that elementary particles could coalesce into atoms and everything began to take shape? Or perhaps it’s the case that language is the basis for the transmission of knowledge and the preservation of memory?

“Recording,” our term for registering information, comes from two syllables, “re” and “cor,” and thus reminds us that people used to believe that we preserved memories in our heart. This might be a helpful association as we increasingly face the decision of what among this endless deluge of data actually interests or moves us. But where exactly is recollection located now? We don’t know. There’s a story told about Ronald Reagan that during his 1980 presidential campaign he related with complete conviction a wartime experience that, although he seemed to have believed that it had really happened, turns out to have been merely the plot of a Hollywood film that he had internalized and made into a reminiscence. In numerous experiments, scientists have proved that our memories are anything but objective recordings of events that actually occurred. Accordingly, they’re not something that’s been put away for future reference like a book on a shelf, but rather a construction repeatedly regenerated in real time in our brain.

Thus, the brain doesn’t play the role of a repository or even of consciousness itself; rather, it’s the interface between the individual and his/her environment, and memory and
consciousness are constantly being created anew from the processes of this connection.