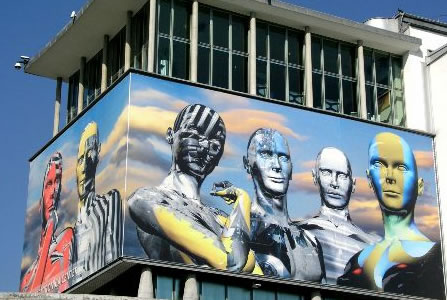 Ever higher in resolution and ever more tightly-woven is the net of digital surveillance that surrounds us. Data-tile by data-tile, highly sophisticated algorithms compile the mosaics depicting our digital persona. And while it’s going on, we’re giving ourselves over to Web 2.0 services in which we willingly reveal larger and larger fragments of our everyday life. Whether via background checks completely unbeknownst to us or the voluntary relinquishment of our privacy, The Visible Man seems to have become reality.

In light of these developments, Ars Electronica 2007 says GOODBYE PRIVACY and sets off in search of traces of a new culture of everyday life at the nexus of angst-inducing scenarios of seamless surveillance and the enthusiasm we bring to staging our personas in public.

Ars Electronica 2007  Innovative, same as ever

To bid farewell to our private sphere in a way that’s consistent with the phenomenon itself, Ars Electronica is staging this event in the only possible venue: the public sphere. The Festival’s traditionally wide-ranging propagation is thus endowed with a new dimension-not just out into the city but throughout the cityscape and even beyond this particular urban realm. The epicenter of proliferation is Marienstraße. This curiously lifeless, stage-set-like island in the midst of downtown Linz will morph into Second City , the portal between reality and artificiality. The public sphere and the metropolitan infrastructure become part of the artistic intervention and, thereby, a medium in their own right. The culmination of this artistic discourse pitting privacy against publicity will be an observation & control scenario encompassing the entire territory within the city limits. During a protracted flyover, an eye-in-the-sky will take about 4,400 orthographic photographs of Linz and its inhabitants-a group portrait raised to the superlative degree.

A wide array of symposia, exhibitions, performances and interventions will be evaluating and reflecting the significance and status of publicity and privacy. Among the special highlights on this year’s Festival calendar are:

•  Fundamental Rights in the Digital World, an international conference being organized jointly by the Austrian Association of Judges and Ars Electronica;

•  A Day in the City that will climax with the all-city group portrait;

•  We Guide You , the premiere of a Festival parcours specially designed for young people and parents.

Marko Peljhan is this year’s featured artist, presenting Situational Awareness : the Ladomir Surveillance System, an exhibit of various sensor-equipped vehicles that have been under development since 1997, as well as models of the architecture of polar systems and accompanying documentation and reference material.

The Festival’s star-studded highpoint will once again be the Ars Electronica Gala in Linz’s Brucknerhaus featuring the presentation of the Golden Nica statuettes to the 2007 Prix Ars Electronica prizewinners. The artists themselves are the stars of this show.