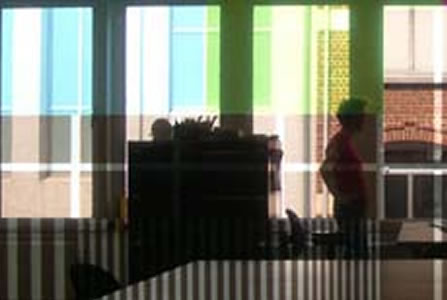 As in previous years the fifth edition of the argosfestival provides a free port for a wide range of audiovisual art forms. It’s a wide work area that is in constant evolution, subject to societal and technological developments. The festival programme reflects this variability, going beyond the traditional delineations between disciplines and media, and offering a valuable perspective on numerous in-between spaces in cinema, television, media art and visual art. Film, video, audio, installation and means of performance nestle together in a wide variety of both Belgian and international work.

The products of several generations, historical and new work, all complement each other, creating breathing space for a multitude of trajectories. Beyond the origin, language and context in which they were realized, clear connections can be made in regards to formand content. The search for new narrative environments and relations between (the experience of) space and time; a resistance to conventional audiovisual forms and (mass)media and the immaterial stream of images that overrun us on both television and industrial cinema; a craving for adventure in expression and perception, learning how to see and hear (all over again): these are just some of the lines of flight which the programme traverses.

CURATED PROGRAMS
Four themed programmes form the backbone of the festival. In the exhibition Multipistes Jean-Christophe Royoux focuses on a generation of young French artists who propose post-cinematographic forms, deconstructions or alterations of the familiar notions of projection and identification. The works in the programme Black & White-outs also question the basic conditions of cinema, by making radical choices for monochrome images and exploring the physiological relationship between hearing and seeing. Challenging and destabilizing the dominant position of the image constitutes a directional guideline in the film and video programme of Tanya Leighton, In the Poem About Love You Don’t Write the Word Love, as well as in Inner & Outer Worlds curated by Herman Asselberghs, which offers a selection of Belgian audiovisual essays.

ARTISTS IN FOCUS
A contrary and wayward attitude also applies to the work of two artists in focus. The digital preservation of the work of the Belgian audiovisual artist JoÃ«lle Tuerlinckx indirectly led to an appraisal which, spread out over a myriad of spaces and programmes, will be presented throughout the festival in various forms for your eyes and ears. A number of recent landscape portraits by the American filmmaker James Benning are shown, in which he goes on the lookout for the effects of duration on the perception of space.

EVENTS
The adhesion of sound and image, hearing and seeing, is also explored in real-time. Mikko Hynninen will make use of the inherent sound image of the Kaaitheaterstudioâ?Ts as a resource for an in-situ performance, in which the environment itself is considered as a virtual instrument. During the closing night of this festival edition the collective of MIMEO and video maker Kjell BjÃ¸rgeengen are on the lookout for colourful dialogue, amongst musicians, between image and sound, analogue and digital, control and coincidence. Furthermore, an international symposium on presenting media art and the role of the curator in respect to that , co-organised by the Digital Platform (IAK/IBK, support centres for the Visual and audiovisual arts), will take place during the festival.

BELGIAN FOCUS
This wealth of approaches and use of media is also reflected in the Belgian Focus segment, traditionally offering a selective outline of recent domestic audiovisual artistic production. These are the cross-pollinations and connections that are the elementary particles of the argosfestival: stimulating a circulation of experiences and ideas, creating a virtual network of ex- and impressions, physically unfolding as well, over several locations in Brussels.