Annunce of winning project Sea Contest “The Gate of Milan” 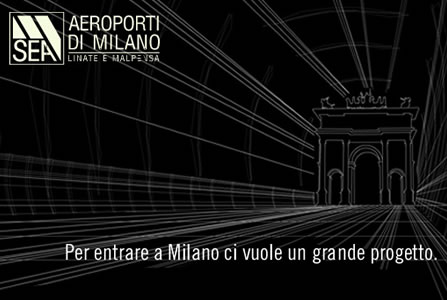 La Porta di Milano, the contest launched last June by the SEA  the company that manages the airports of Milan  comes to an end. The competition, aimed at involving the international community of architecture and design in the realization of the “twelfth gate of Milan”, got a great success.

More than eighty projects have been presented to the SEA for the realization of the work of art intended to join Malpensa Airport to the city. The winning project will be built in the space between the airport and the Malpensa Express railway station, representing the “new” city gate.

The initiative promoted by the SEA aroused big interest also at the international level, with more than 20% of the projects coming from foreign architects and designers  Europeans, Americans, Asians and Africans. “These results  says Giuseppe Bonomi, President of the SEA  are a great success for us and confirm our commitment to support architecture and design as key elements of the image of Milan in the world”. The President of the SEA, attending the Design Party organized for the 2010 Milan International Furniture Fair at the Breda hangar of the Linate Airport, also announced that the press conference for the presentation of “La Porta di Milano” winning project will take place at La Triennale di Milano design museum on Thursday 22th April, at 12:30.

The winning project will be chosen by a panel presided by Giampiero Borghini and composed of Sandrina Bandera, Mario Bellini, Gregorio Caccia Dominioni and Arnaldo Pomodoro. For its realization, an investment of 1,7 million euro is planned.

In addition to the initiatives related to “La Porta di Milano”, SEA plans to carry out other interventions for the improvement of Milan airports. The happening organized at the Breda hangar has also been the occasion to announce the launch of further conservative recovery works that SEA will carry out to enhance the image of Linate Terminal façade overlooking on the airplanes’ square, conceived by Aldo Rossi in 1991.