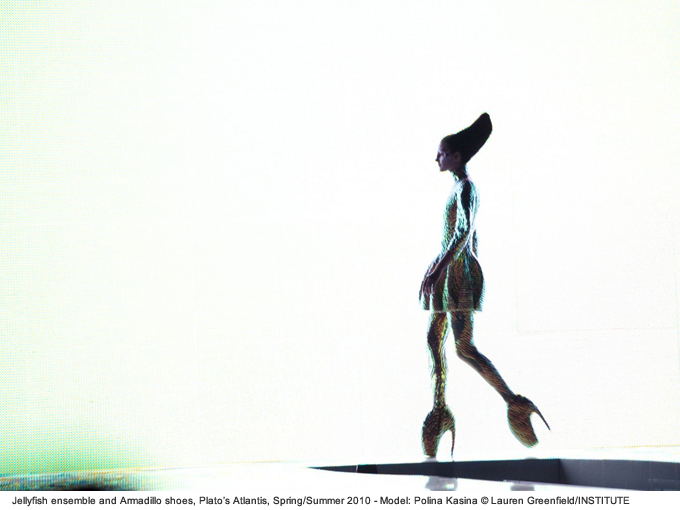 The first and largest retrospective of the late Alexander McQueen’s work to be presented in Europe, Alexander McQueen: Savage Beauty showcases his visionary body of work. Spanning his 1992 MA graduate collection to his unfinished A/W 2010 collection, McQueen’s designs are presented with the dramatic staging and sense of spectacle synonymous with his runway shows. The original version of Alexander McQueen: Savage Beauty at the Metropolitan Museum of Art, New York in 2011 was organised by the Costume Institute and became one of the museum’s top 10 most visited exhibitions

London was the epicentre of McQueen’s world. The son of a taxi-driver, he grew up in the city’s East End and left school at 15 to become a tailor’s apprentice on Savile Row in Mayfair. In 1990 he joined the prestigious MA Fashion course at Central Saint Martins. Already a highly proficient and inventive tailor, here he learned how to be a fashion designer, drawing inspiration from London’s history, its world-class museums and emerging ‘Brit art’ scene.

Working with a small, closely-knit team, he produced a series of low budget, enthralling and provocative shows set in gritty, industrial locations across the capital. He recalled, ‘There was so much repression in London fashion. It had to be livened up.’ 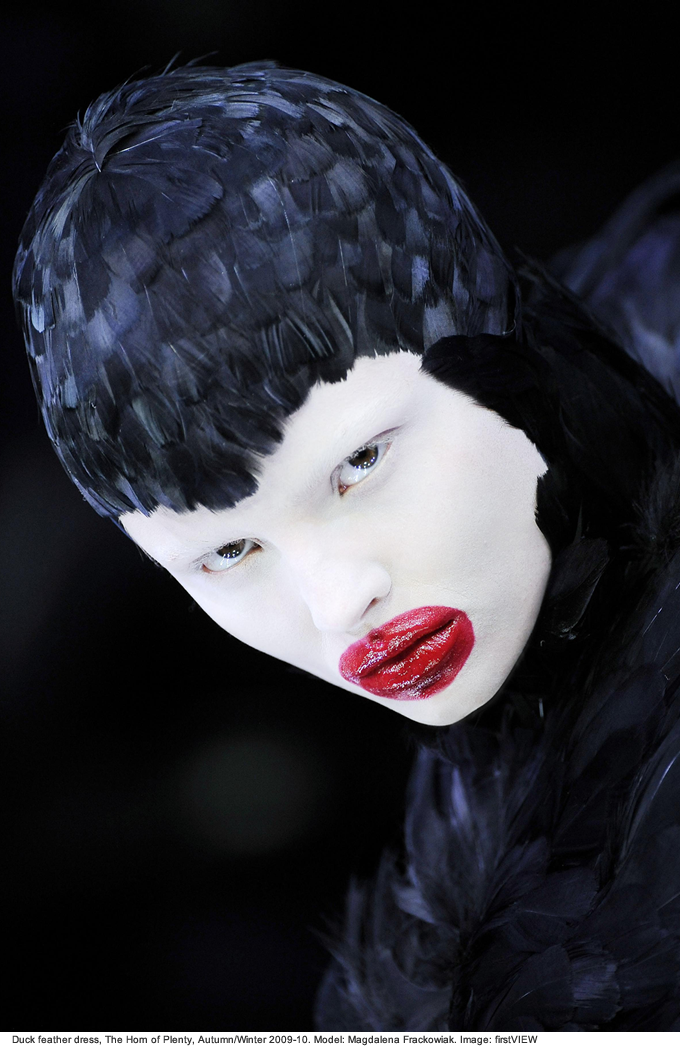 ‘You’ve got to know the rules to break them. That’s what I’m here for, to demolish the rules but to keep the tradition.’ – Alexander McQueen

Alexander McQueen consistently promoted freedom of thought and expression and championed the authority of the imagination. In this, he was an exemplar of the Romantic individual, the hero-artist who staunchly followed the dictates of his inspiration.

McQueen expressed this originality most fundamentally through his methods of cutting and construction. These were both innovatory and revolutionary. He was such an assured designer that his forms and silhouettes were established from his earliest collections, and remained relatively consistent throughout his career.

‘People find my things sometimes aggressive. But I don’t see it as aggressive. I see it as romantic, dealing with a dark side of personality.’ – Alexander McQueen

One of the defining features of Alexander McQueen’s collections was their historicism. While McQueen’s historical references were far- reaching, he was particularly inspired by the nineteenth century, drawing especially on the Victorian Gothic. ‘There’s something kind of Edgar Allan Poe,’ he once observed, ‘kind of deep and kind of melancholic about my collections.’

Like the Victorian Gothic, which combines elements of horror and romance, McQueen’s collections often reflected paradoxical relationships such as life and death, lightness and darkness, melancholy and beauty. 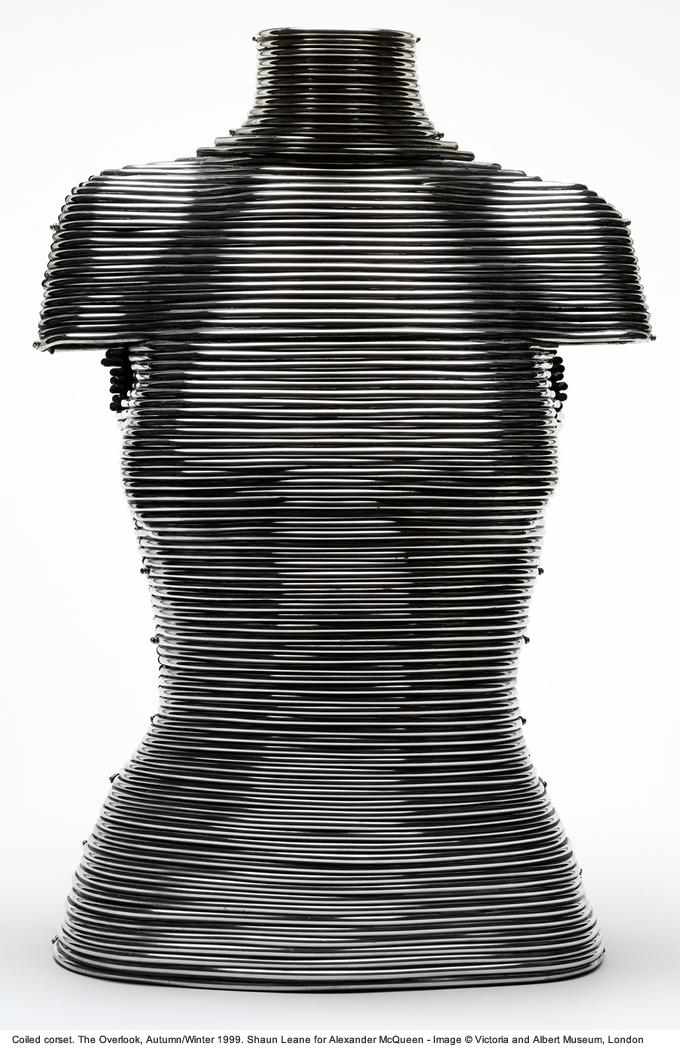 Throughout his career, Alexander McQueen frequently returned to the theme of primitivism, which drew upon the fantasy of the noble savage living in harmony with the natural world. Eshu (Autumn/Winter 2000) was inspired by one of the most well-known deities of Yoruba mythology. It’s a Jungle Out There (Autumn/Winter 1997–98) was based on the theme of the Thomson’s Gazelle.

The collection was a meditation on the dynamics of power, in particular the dialectical relationship between predator and prey. McQueen’s reflections on primitivism were frequently represented in paradoxical combinations, contrasting modern and primitive, civilized and uncivilized. Typically, McQueen’s narrative glorified the state of nature and tipped the moral balance in favour of the ‘natural man’ or ‘nature’s gentleman’, unfettered by the artificial constructs of civilization.

Alexander McQueen’s collections were fashioned around elaborate narratives that were profoundly autobiographical, often reflecting upon his ancestral history, specifically his Scottish heritage. Indeed, when he was once asked what his Scottish roots meant to him, the designer responded, “Everything.” McQueen’s national pride is most evident in The Widows of Culloden (Autumn/Winter 2006) which was based on the final battle of the Jacobite Risings in 1745. A grand collection, it presented a catharsis to the anti-romanticism of his earlier, Highland Rape collection of 1995. McQueen’s message, however, remained defiantly political: ‘What the British did there was nothing short of genocide.’

Despite these heartfelt declarations of his Scottish national identity, McQueen also had a deep interest in the history of England. This was most apparent, perhaps, in The Girl Who Lived in the Tree  (Autumn/Winter 2008), inspired by an elm tree in the garden of McQueen’s country home in East Sussex. Influenced by the British Empire, it was one of McQueen’s most romantically nationalistic collections, albeit heavily tinged with irony and pastiche

‘I find beauty in the grotesque, like most artists. I have to force people to look at things.’ – Alexander McQueen

The emotional intensity of McQueen’s catwalk presentations was frequently the consequence of the interplay between dialectical oppositions. The relationship between victim and aggressor was especially apparent, particularly in the accessories. He once remarked, ‘I like the accessory for its sadomasochistic aspect.’

The exhibition’s Cabinet of Curiosities, focuses on atavistic and fetishistic paraphernalia produced by McQueen in collaboration with a number of accessory designers, including the milliner Philip Treacy and the jeweler Shaun Leane. The Cabinet also includes show pieces, one-off creations made for the catwalk but not intended for production.

Alexander McQueen’s romantic sensibilities expanded his imaginary horizons not only temporally but also spatially. As it had been for artists and writers of the Romantic Movement, the lure of the exotic was a central theme in McQueen’s collections. His exoticism was wide-ranging. Africa, China, India and Turkey were all places that sparked his imagination. Japan was particularly significant, both thematically and stylistically. The kimono, especially, was a garment that the designer endlessly reconfigured in his collections.

But as with many of his themes, McQueen’s exoticism often expressed itself in contrasting opposites. This was the case with It’s Only a Game (Spring/Summer 2005), a show staged as a chess game inspired by a scene in the film Harry Potter and the Philosopher’s Stone (2001), which pitched the East (Japan) against the West (America)

‘It was about trying to trap something that wasn’t conventionally beautiful to show that beauty comes from within.’ – Alexander McQueen

VOSS (Spring/Summer 2001), also known as the ‘Asylum’ show, was staged inside a vast two-way mirrored box. The collection featured a number of exoticized garments, including a coat and a dress appliquéd with roundels in the shape of chrysanthemums.

Typical of McQueen’s collections, VOSS offered a commentary on the politics of appearance, upending conventional ideals of beauty. For McQueen, the body was a site for contravention, where normalcy was questioned, and where the spectacle of marginality was embraced and celebrated.

‘I have always loved the mechanics of nature and to a greater or lesser extent my work is always informed by that.’ – Alexander McQueen

Nature was the greatest, or at least the most enduring, influence upon Alexander McQueen. Many artists of the Romantic Movement presented nature itself as a work of art. McQueen both shared and promoted this view in his collections, which often included fashions that took their forms and raw materials from the natural world.

McQueen frequently played upon the transformative powers of clothing. In The Widows of Culloden (Autumn/Winter 2006) a dress created entirely from pheasant feathers imbued the wearer with an avian beauty, while a razor clam shell encrusted dress from VOSS (Spring/Summer 2001) formed a brittle carapace. Sarabande (Spring/Summer 2007) incorporated both silk and real flowers, which withered as they fell onto the catwalk. 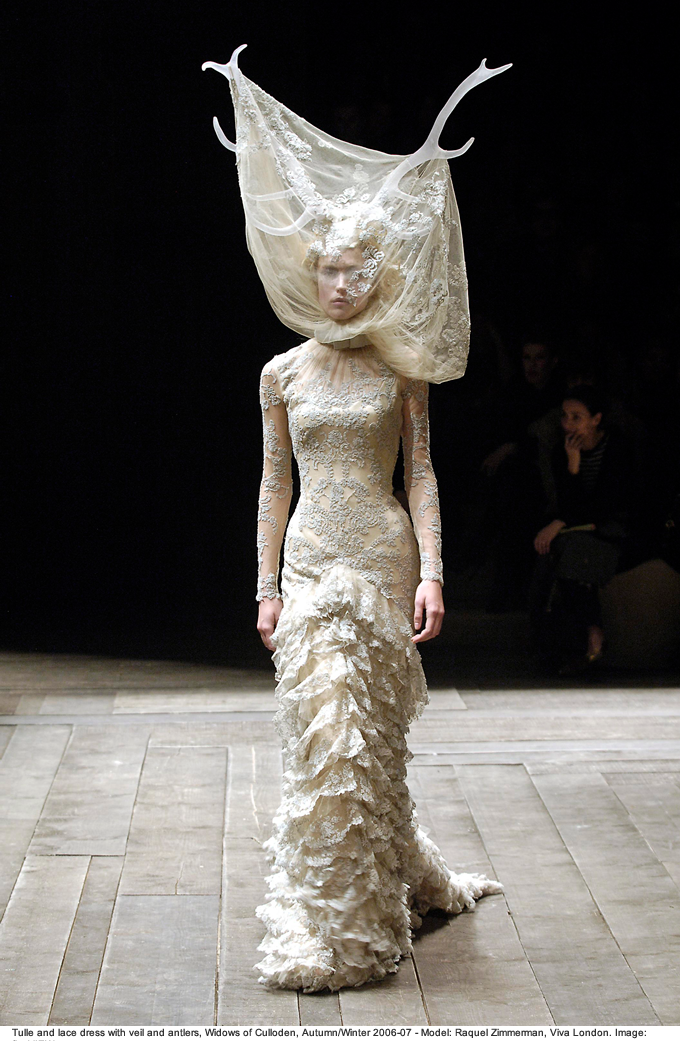 ‘Plato’s Atlantis predicted a future in which the ice cap would melt, the waters would rise and life on earth would have to evolve in order to live beneath the sea once more or perish. Humanity would go back to the place from whence it came.’ – Alexander McQueen

Nature’s influence on McQueen’s work is most clearly reflected in Plato’s Atlantis (Spring/Summer 2010), the last fully realized collection the designer presented before his death in February 2010. Inspired by Charles Darwin’s On the Origin of Species (1859), it presented a narrative that centred not on the evolution of humankind but on its devolution. McQueen utilized complex, digitally engineered prints inspired by sea creatures and introduced the towering ‘Armadillo’ boots.

With its mixture of technology, craft and showmanship, Plato’s Atlantis was considered to be McQueen’s greatest achievement. It offered a potent vision of the future of fashion.