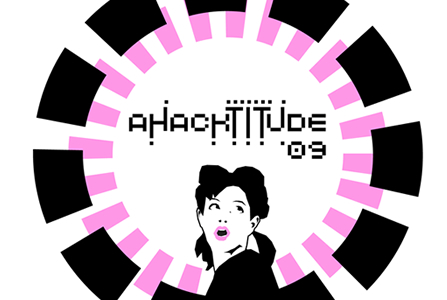 AHAcktitude ’09 is the second collective meeting for the community of the aha@ecn.org mailing list, one of the lists hosted by the historical independent server Isole Nella Rete (Islands in the Net), and at the core of the networking project AHA:Activism-Hacking-Artivism.

The idea of AHAcktitude came about from the desire of the more than 600 members of the aha@lists.ecn.org to be able to meet. For the first time after the creation of the mailing list (30th of December 2002) this happened last year in Venice at the S.A.L.E. Docks. AHAcktitude ’09 is the second stop point for this path whose centre is to discuss themes like artistic, political and technological activism. The meeting will be held in Milan on the 27-28-29th of November at the Social Centre Cantiere and will be proposing to create networks, share projects and build new activist interventions for the future.

By adopting the same strategy as Hackmeetings, AHAcktitude is organised and managed directly by the participants who can propose and share seminars or projects via the aha@lists.ecn.org list. AHAcktitude began as a space for dialogue and sharing, with the purpose of learning and spreading practices and knowledge in a free environment, without censorship. Everyone can use the AHAcktitude wiki to participate: it is a shared space for the presentation of projects, ideas, files, documents, music, etc.

AHA:Activism-Hacking-Artivism is an artistic networking project founded in 2001 by Tatiana Bazzichelli aka T_Bazz. AHA is a networking initiative activated by contamination/integration of multiple media and events, where the common denominator is hacktivism and artistic and political activism. Activism-Hacking-Artivism focuses on artists and hacktivists in Italy and abroad that use media in an independent way, through the organisation of exhibitions, events, and collective meetings organised by T_Bazz along with other curators that change accordingly.

The core of the project AHA is the community that develops in the mailing-list aha@lists.ecn.org, where AHAcktitude comes from. The mailing-list aha@lists.ecn.org is administered by Lo_Bo, Dedalus and Gionatan, and today counts more than 600 subscribers and it is the sister mailing-list of the international list Nettime. The AHA: Activism-Hacking-Artivism project won an Honorary Mention in the Digital Communities cathegory of Prix Ars Electronica at the ARS Electronica Festival in Linz (AU) in September 2007.