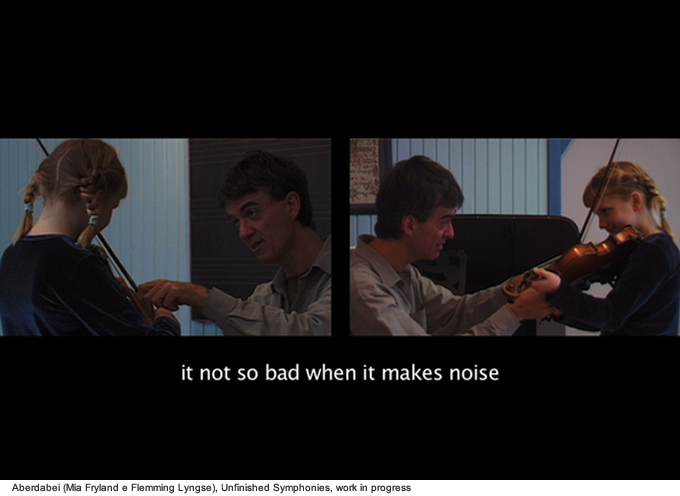 From May 26th to June 23rd Unfinished Symphonies will be screened in the project room and will observe the same opening times and admissions to the Villa.

The third appointment of AN EDUCATION – a series of exhibitions of artists’ videos and workshops conceived for students and anyone interested in contemporary art – opens with Unfinished Symphonies on May 25th 2013 at Villa e Collezione Panza, Varese, the property owned by FAI – Fondo Ambiente Italiano. The video Unfinished Symphonies, by the Danish artists and film-makers Mia Fryland and Flemming Lyngse (ABERDABEI), will be shown in the project room of the Villa until June 23rd.

For a number of years Mia Fryland and Flemming Lyngse have been conducting workshops all over the world with different groups of students, emphasizing personal language and the importance of the many different ways of expression at our disposal. Unfinished Symphonies is a research project and work in progress on the experiences of music playing children in a primary and secondary school who benefit from a model of musical education that enthuses young people without creating competitiveness, focusing instead on the pleasure and the joy of playing.

The video material was recorded over a period of a year at the Vidar School in Denmark during the music lessons. Flemming Lyngse and Mia Fryland followed and filmed the weekly lessons of three hundred and fifty school children taught by professional musicians or teachers who were trained in music conservatories. A unique film was subsequently created from a pool of hundreds of scenes, evoking the spirit of the teaching within the film itself. 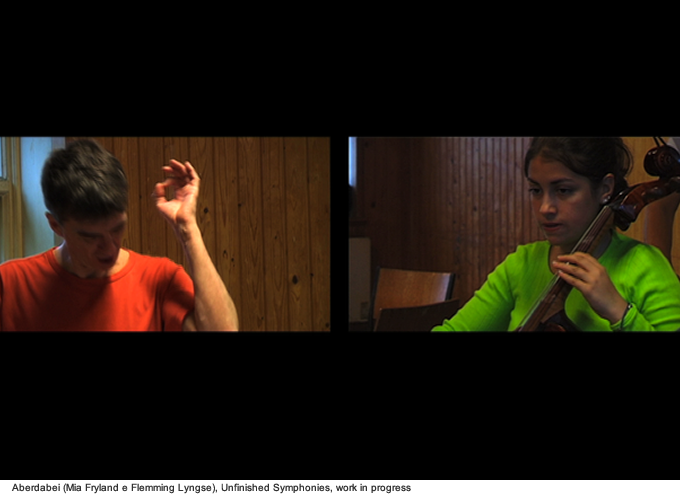 Unfinished Symphonies is a film that continues to be unfinished – but in its unfinished state is nonetheless a totally complete work. On the day of the opening the artists will conduct a workshop with students from a local high school from 10 am to 1 pm, while at 4.30 pm they will meet the public during a conversation with the artistic director of Villa Panza Anna Bernardini and the curator Maria Rosa Sossai. Afterwards the video will be screened in the chapel on the first floor of the villa, specially set up as a project room. There will be guided tours for students of schools, colleges and universities of the surrounding area and of Lombardy.

AN EDUCATION is an initiative of FAI – Fondo Ambiente Italiano and is curated by ALAgroup, the platform for education and contemporary art founded by Maria Rosa Sossai. The project stems primarily from the didactic-educational need to attract young people to the museum and stimulate their interest in contemporary art, with an emphasis on new technologies and the new media which has always been one of the main guidelines behind Giuseppe Panza’s choices in the creation of his Collection.

AN EDUCATION is organized under the patronage of the Province of Varese. The event has been made possible thanks to the valuable contribution of Eni who, as main partner of the calendar of “Events in the FAI Properties”, is sponsoring the Foundation in this important project.

Other partners who renewed their contribution are PIRELLI, who for many years supported the Foundation, Cedral Tassoni, the historic Italian brand who for the second consecutive year decided to pair the tradition, history and the naturalness of its product to FAI, and UBI – Banca Popolare di Bergamo. Villa e Collezione Panza would like to thank Varese’s Delegation of FAI Giovani. 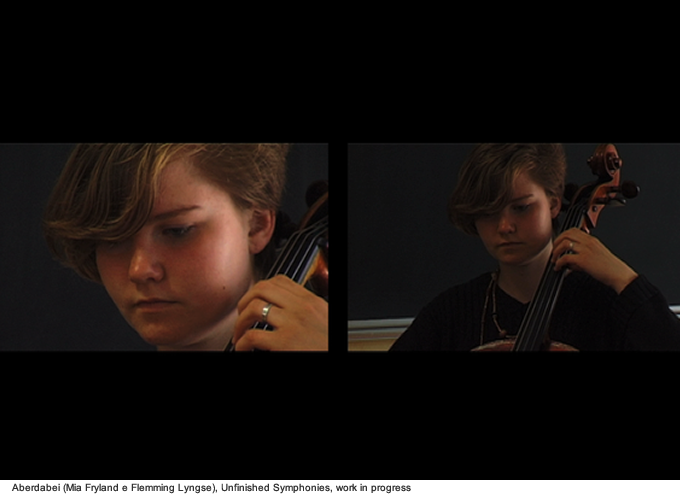 Film directors and visual artists Mia A. Fryland and Flemming Lyngse (Denmark) started their professional partnership in early 2000 and, in 2009, founded the Aberdabei project. Mia A. Fryland (Elsinore, 1963) studied at the Gerrit Rietveld Academy in Amsterdam and at the Malmö Art Academy, Sweden. Her main media are film, photography, drawing and sound. She has exhibited in the Netherlands, Sweden, Scotland, Denmark, and conducted workshops and masterclasses in Denmark, Jordan, Egypt and Scandinavia. Flemming Lyngse (Copenhagen, 1962) graduated from The Danish Film School where is currently guest professor as well as teaching in other schools and institutions, among them the Arab Institute of Film in Amman, Jordan. He is the author of numerous films and documentaries produced for Danish television.

Lyngse and Fryland have been awarded grants and participated in a number of residency programmes: in 2012 they were artists in residence at Circolo Scandinavo, the Nordic Artists Residency in Rome. As part of their artistic practice they have been travelling around the world, making films and running workshops in a number of countries such as El Salvador, Sudan, Palestine, Israel, Vietnam, Zimbabwe, Japan, Egypt, Syria, Jordan and Cambodia, with long stays in Berlin, Jerusalem, New York and Rome.

Among their projects: Conceptions, an interactive documentary funded by The Danish Film Institute and The Danish Ministry of Culture; My Blue Dress, interactive documentary/film; The Right Suit, film for Danish television; Unfinished Symphonies, work in progress/site specific film presented in Rome during ‘Spazi Aperti X’ at the Romanian Academy as well as in Alexandria, Egypt, and  Copenhagen.