A stream of junk: interview with Sašo Sedlaček 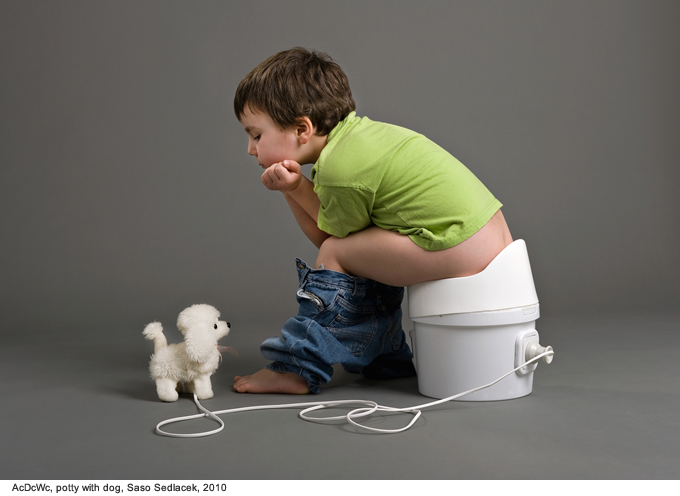 Obsolescence, a difficult word that is used more and more often in non-specialist fields, indicates “the state of being which occurs when an object, service, or practice is no longer wanted even though it may still be in good working order” (thank you, Wikipedia).

The success of this word comes from the fact that we experience it every day, immersed as we are in products manufactured to become obsolete – and I am not referring only to smartphones and tablets. Planned obsolescence causes the rising of material which is obsolete and unusable according to the logic of the system: the junk. In recent years the planned elimination of materials from the horizon of functionality has attracted the attention of artists and intellectuals.

Sašo Sedlaček (b. 1974), Slovenian artist (that Digicult knows with the project Infocalypse Now included in the exhibition The Mediagate at Galeria NT /Imaginarium, in 2010 in Lodz, Poland, curated by Marco Mancuso and Claudia D’Alonzo – http://goo.gl/eyRXl9) who is interested in these issues long before they became one of the hottest topics of the discussions of these years, has quite closed his first solo exhibition in Italy about these and other issues.

Curated by Domenico Quaranta in the spaces of Ultra cultural project in Udine for another couple of days until the 20th of June, Superstrash is an exhibition – produced by Aksioma – Institute for Contemporary Art, Ljubljana and Link Art Center, Brescia – in which the artist presents his research to an audience that until now had only known it because of some participations in collectives in past years. It included early works like Just do it (2003) , Loop (2004) and Beggar Robot (2006) with more recent projects like The Ex (2010), AcDcWc (2019), The Big Switch Off (2011), iSmoke2 (2011) and Jobless Avatar (2014). 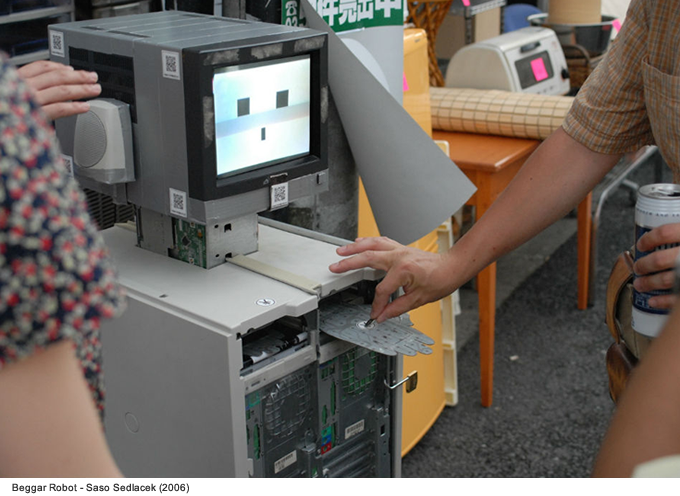 Filippo Lorenzin: Let’s start with the title of the exhibition, Supertrash. It’s the second time you used this title, the first Supertrash was your first overview exhibition held in 2011 in Slovenia: what is the relation between that and this new exhibition?

Sašo Sedlaček: Actually there were several occasions when I used the title Supertrash. It’s like a brand, first used as a title for the overview exhibition in 2011. I use it when exhibiting several pieces together that deal with the same topic of trash, recycling, DIY, postindustrial… The difference between the two exhibitions? There are some pieces that were included in previous and bigger Supertrash exhibitions that are not included in the exhibition at Ultra. But there are also new pieces in this exhibition that were made after the first overview in 2011. So all these exhibitions have the same Supertrash packaging, but different content.

Filippo Lorenzin: I’ve another question about the title. Supertrash sounds really ironic and “mmmerica”-style to me. Many have pointed out the irony within your research and projects. What do you think?

Sašo Sedlaček: What can I say, I love consumerism and consumerism likes me. It’s like saying to annoying person: “thank you for your kindness” when in reality we would like to point out its unfriendliness. Yes, it’s ironic and it’s a satire of consumerism. I try to do work that is sharp, prickly reflection of reality, spiced up with humor and irony. 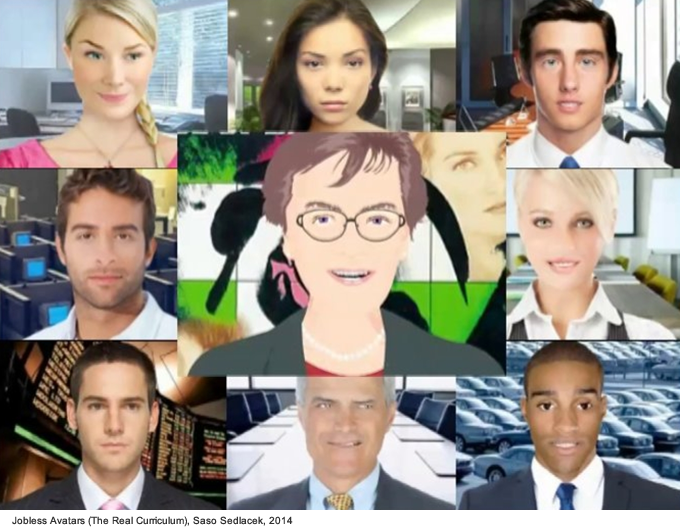 Filippo Lorenzin: Looking at your works, issues like obsolescence, DIY philosophy and post-industrialism come easily to mind. Can you tell since when you’re interested in these questions? I’m fascinated by the fact you were born in 1974 in a place between West and East Europe and I can’t help but think that this is related to your interest in these issues.

Sašo Sedlaček: That fact actually determines the whole generation, we are the children of constant transition. Growing up in socialism in decline, then in transition to capitalism, into digital age, and finally into the crisis. Only the fact that we changed our currency in Slovenia four times in last 25 years (first we had Yugoslavian Dinar, than transitional vouchers, than Tolar, and now Euro), can be quite eloquent. And all that constantly changing environment can be, unfortunately or not, quite inspirational.

To me this new fresh install of capitalism in Slovenia is a great fascination. It was a softer transition, not a typically eastern radical turnaround that usually doesn’t bring any good. Not that this soft transition was much better, it’s still a fact that ever since, we became post-industrial, shopping crazy, more corrupted society. But it still shows how easy is to change the system and habits if there is a will. Actually if we would know how, we could export experiences

Filippo Lorenzin: This is the first time you exhibit in Italy. Do you think your projects work differently here than in Slovenia? Are there big differences between the two contexts?

Sašo Sedlaček: I have been exhibiting solo project in Italy before, at Isola Art Center in Milano and Centro per l’arte conteporaneo Luiggi Pecci in Prato for example, but never an overview. The work in two different context? Well, the whole world is in transition since the begging of the 90-ies, with only difference that since 2001 or 2008 that fact became obvious to everyone. Differences within different contexts are getting smaller and smaller. We more or less consume the same source content from traditional and digital media, google…

We start too alike each other more and more. In the ex-eastern bloc countries we definitely have some experiences in changing our society’s system, but at the same time we suffer from terrible amnesia. For example, now everyone is talking about bigger self-government in companies, society and so on, but we are acting like we didn’t had just that, not so long ago. Like we were born yesterday. On the other hand I always wondered how western countries have this feel like everything is the same since ever. Well, now this is changing as well. 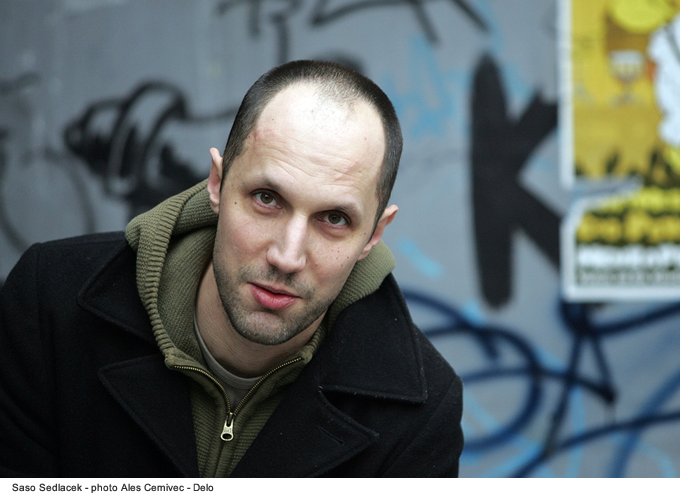 Filippo Lorenzin: The rejected element is important to your research, it’s something you study and often rehabilitate. What’s the point of this fascination?

Sašo Sedlaček: First, this material is free of price, there is abundance of it around and you can collect it as much as you want. Not that I want that, but still this was one of the facts why I started to work with rejected materials. Secondly, junkyards are a real time archeology of everyday life. Inspection of the rejected, tells us a lot about the society we live in.

Junkyard collectors, people that work on dumps, can precisely tell when the digital TV signal came into our homes, when the plasma and LCD monitors came, when the IKEA was built close to where we live, because every new technology or good triggers the tsunami of old monitors, computers, furniture, that we change for a new one. And that fascinates me. We don’t repair things, or upgrade, we trash it and buy new.

Filippo Lorenzin: The DIY philosophy is something that some years ago didn’t need a tag. In these years we’re accustomed to live in a world where the things are not usually done by ourselves and I think this activity is a political stance – a way to go against the preconstituted system. What do you think?

Sašo Sedlaček: I agree, its political stance. And also logical if we need to, due to the crisis, tighten our belts. But it’s quite contradictory that at the same time when we need to tight our belts, have to increase the consumption to save the economy. Isn’t it either one or another? Well, we found the way to increase the consumption anyway, with cheap and non-quality goods. But this is only increasing the problem, since there are somewhere workers doing that stuff for low wages in unbearable conditions, and also this causes constant flow of new trash.

DIY is one, but only part of the solution. I think that the companies that produce the goods should extend their interest beyond the moment when they sell it and we buy it. They should take the reasonability for the old piece when we buy a new one. This would force them to open up repair shops and upgrade the existing models. There are some really good initiatives around for which we still need to find a way how to implement them on a broader social scale. 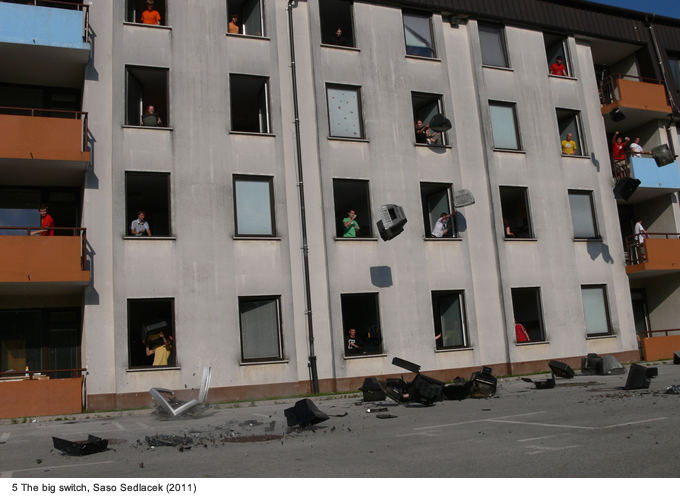 Filippo Lorenzin: I’m especially interested in The Big Switch Off (2011). You asked to the people of a residential building to throw out the windows their old, obsolete televisions the day after the introduction of digital signal: this action underlines the strong role of technology in individuals’ lives, creating a collective rite that reminded me some kind of old tradition (“throw away the old in order to embrace the new“). Can you tell something about this project? How the people reacted to your request?

Sašo Sedlaček: This is something I was explaining before –constant flow of trash being replaced with new cheap technologies. We think we are recycling technology, with putting the old computer or in this case old TV sets, into the proper containers. But what really happens is that they collect them, take out 1% for recycling and send out the rest to, so called third world countries, where it becomes trash and environmental burden.

I wanted to prevent that by organizing mass destruction of these TV sets here and now, before being exported. It was a call against recycling, however this sound crazy. The people loved it, I mean, who wouldn’t? This old avant-garde saying “to throw away the old in order to embrace the new” is nowadays adopted by multinational companies, but in their case it’s narrowed to goods. I think people should embrace it again and throw away the old exchange system and bad habits. 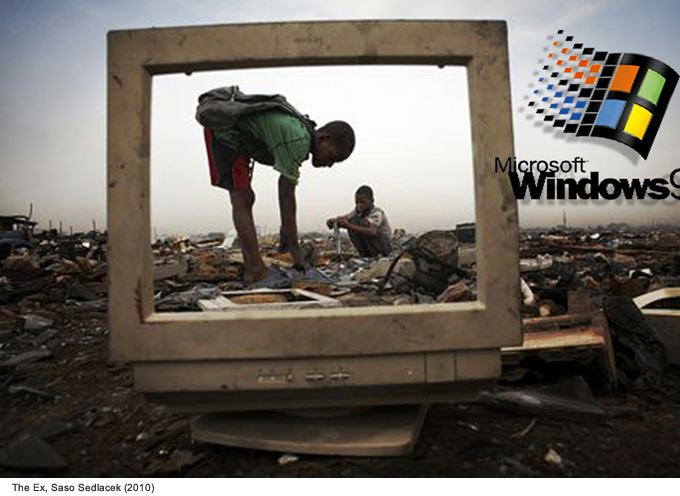 Filippo Lorenzin: Your research is really coherent, to me. What are the issues you’re working on these months?

Sašo Sedlaček: It’s becoming harder and harder to get the new angle on the topic of recycling, since it became such a mainstream in last few years with so much production made of redundant materials in fashion, design, DIY, architecture… I embrace the trend naturally, but at the same time this production is often quite shallow. And the question is, if this is only a trend or are this practices here to stay. There were already radical movements in 60-ies and 70-ies dealing with the same topic, but it was all forgotten in the 80-ies. The amnesia is an interesting topic. Maybe I’ll do something with it. Making a new project is like writing a novel or making a movie. It all starts with a good story.