A “Little Sun” in the art world: an interview to Olafur Eliasson 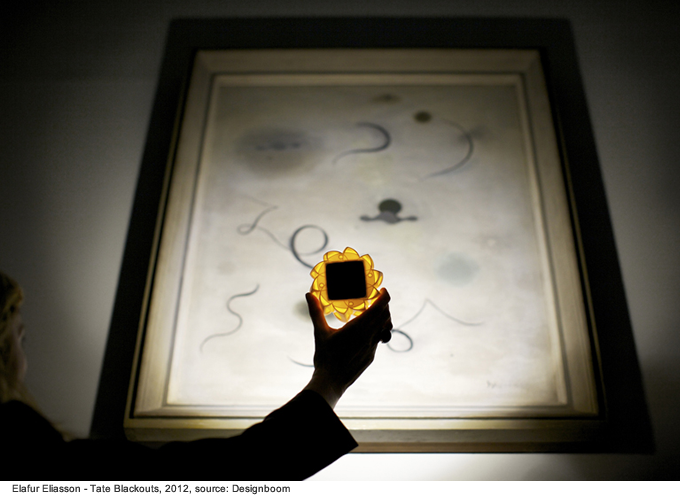 On the 28th of July 2012, the same period as the Olympic games, was launched the new work of Olafur Eliasson’s: Little Sun at Tate Modern, in London. Little Sun is an invitation to look at the art pieces located in the museum in the dark and through just the light of the artist’s special solar-powered lamps.

People could live this experience from the end of July on, during the so called “Tate Blackouts”, basically Saturday night museum’s openings after regular visits hours when for two hours lights are off and people can go around the Tate’s Surrealist collection galleries using only the provided lamps. A work of art, but also something more: a project that is part of a wider campaign aiming at raising awareness about solar power, the importance of light for life and the global energy issue and challenge we are currently facing.

As Eliasson himself explains: “ Little Sun responds to the situation we face today, since natural resources no longer abound: energy shortage and uneven energy distribution; it makes it necessary to reconsider how our life-sustaining systems function. I see Little Sun as a wedge that opens up this urgent discussion from the perspective of art”.

Little Sun was developed in collaboration with the Engineer Frederil Ottesen. Technically, the body of the lamp is made of plastic and has a diameter of 12 cm, a depth of 3.2 cm and a weight of 120 g. The solar panel on it is a mono crystalline one of 0.5 Watt and with a surface of 60×60 cm. The lamps are able to provide 5 hours of light after a charge in the sun of 5 hours. 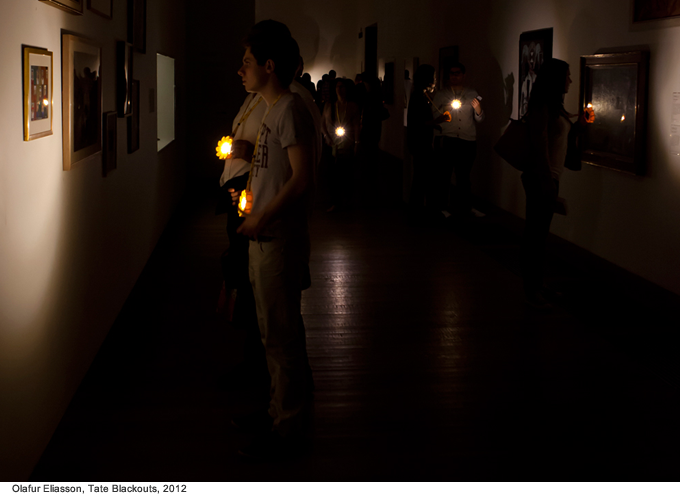 It is true that two of the main elements of Eliasson’s arts have always been social participation (also in terms of interaction, use of public spaces and raising of social awareness) and the dialogue with the natural environment. The artistic act, in an exemplary project such as Little Sun, can become a call for action and social/environmental engagement, as the artist once more declares: “In everyday life, it is important that we critically engage in global initiatives and local contexts. Our actions have consequences for the worlds.”

And in this specific project the two contexts involved are the artistic one (the Tate Modern’s collection) and the public one (the museum space). But interaction with the audience becomes social participation through arts, on an issue of unquestionable importance: light for life.

Eliasson is not new to the Tate’s environment. We remember The Weather Project, an installation held in 2003 at the same place as part of the Unilever Series in the museum’s Turbine hall. Also the theme of light and visibility are not new to the artist.

Considering the entirety of Eliasson’s artistic production, the use of light in works such as “Little Sun” and for instance  “Your Black Horizon” is however completely different from the one in “360° Room for all Colours”.The idea of visibility is always questioned, in two different directions. In the work “Your blind passenger”, the viewers have to use a sense other than sight, while in the first mentioned works, sight is the main source of perception. What is challenging in a work such as Little Sun is the fact that view, through arts, bridges concepts and awareness, in the direction of a wider social participation. Access to global events and sharing of primary needs are also questioned.

On the other hand, but in the same direction, our artist is also the creator and director of the ‘Studio Olafur Eliasson’, a laboratory for spatial research and he’s also founder of the Institute for Spatial Experiments, devoted to arts education.

In particular the Studio witnesses the willing of a broader collaboration with specialists in different fields, since Eliasson participated several times in projects where architects, engineers, craftmens, geometry theorists are involved. Among the main outcomes of this kind of collaborations we mention: The mediated Motion, Serpentine Gallery Pavilion, The Blind Pavilion and Chaque matin je me sens différent, chaque soir je me sens le même. 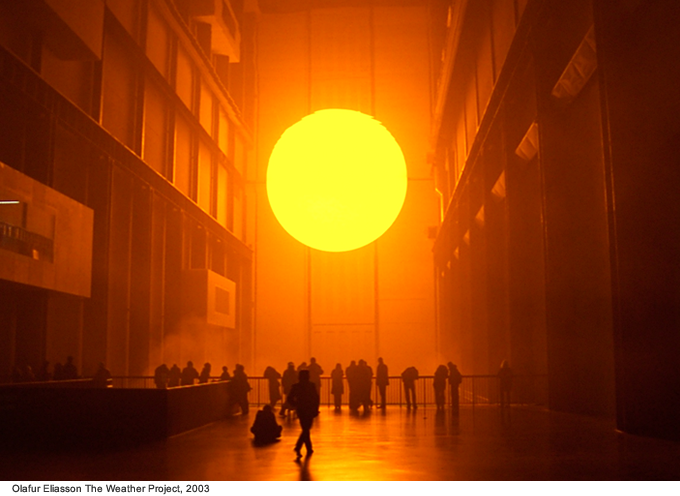 We all know the Danish-Icelandic artist mainly for his installations, sculptures and large scale works realized with natural material like water, light, mist, air and their enhanced spatial environments. His works, often presented in public spaces, are often questioning the perception of space and time dimensions of nature within an ecological context, always in a participatory way.

Audience participation not only results in artistic interaction, but in the raising of social and environmental awareness. The experience of perception is investigated in their physical and sensorial aspects, in a challenging combination of natural elements and architectural structures.

Among his main projects we already mentioned The Weather Project, realized in 2003 as part of the Unilever series. This intallation basically consists in several humidifiers, placed in the open space of the Tate’s Turbine Hall, producing a fine mist made of sugar and water. On them, a semicircular disc composed by several monochromatic lamps creates a single-frequency yellow light. On the ceiling big mirrors are installed where the visitors could see themselves in a suggestive mixed reflection of coloured lights and shadows.

But Eliasson was not new to experiments of this kind, where spatial density is enhanced or questioned within the public space of exhibition halls. Good examples are Your Black Horizon, commissioned for the Venice Biennale of 2005 by the Thyssen-Bornemisza Art Contemporary and realized together with the architect David Adjaye. In this work, a dark and black space has just one weak source of light, a sort of luminous line dividing the space in two levels and creating an unusual visual perception modality of space. But also the installation Din Blinde Passager or Room For One Colour where the main elements of the participants’ enhanced experience are once more intense lights or dense fog. These are just main examples showing how the artistic research on spatial environments could represent an deeper enquiry about physic (and cultural?) perception and interaction with external or natural elements. 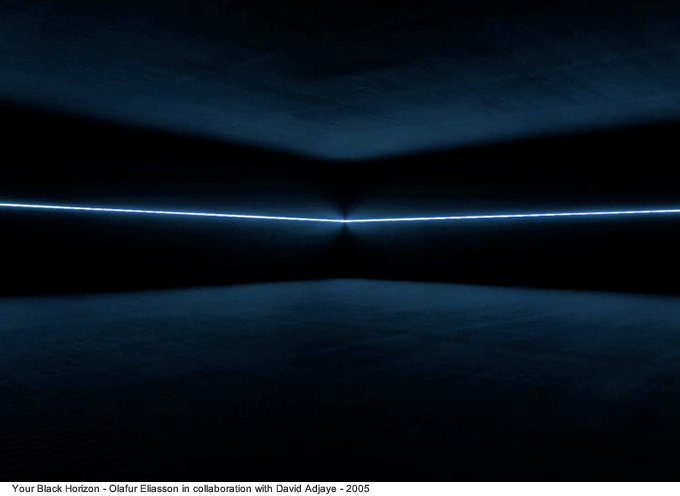 This reflection doesn’t reject the contemporary world, as Eliasson’s relationship with commercial subjects shows. The artist was commissioned also small project for wordlwide brands as Luis Vuitton (with the work Eye See you, a lamp displaying on the LV Fifth Av. Store in New York) or BMW, when he created the sixteenth art car for the company’s Art Car Project in 2007. As well, some of Eliasson’S work were realized for cultural spaces like the facade of Harpa concert hall in Reykjavik or for public spaces like the waterfall under the Brooklyn bridge in New York.

All these are acts of the same desire to participate and incorporate arts in public, urban and cultural environments as if they simply were “spaces”, where men are constantly asked to respond in terms of responsibility, both creative and social, being both of these dimensions part of our human reality. In order to discuss this ideas and projects – and in particular his last work Little Sun – we contacted Olafur Eliasson for a short interview.

Silvia Bertolotti: What are the main projects you are working on with your team at the Institute for Spatial Experiments?

Olafur Eliasson: Actually, the Institut für Raumexperimente (Institute for Spatial Experiments) is not a team who works for me or with me. It is an experimental form of arts education, which is not based on the hierarchical transmission of knowledge that is normal in school. The institute should rather provide tools for the creation of artistic propositions that have consequences for the world, with the practitioners actively involved in the world. 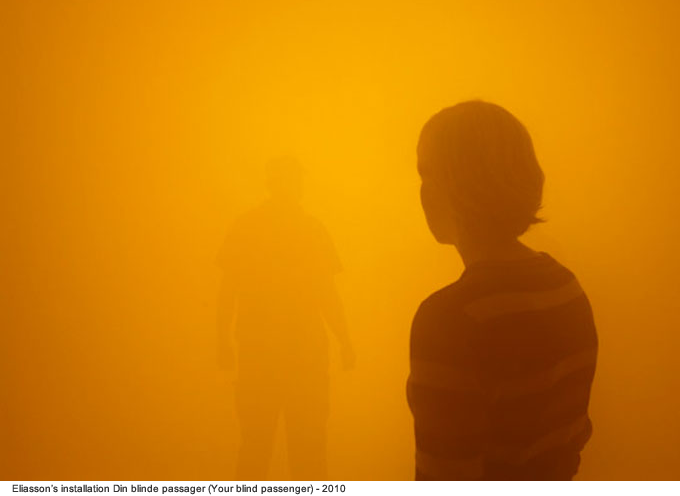 Silvia Bertolotti: Could you quickly explain to us how your Studio is structured in terms of team, organization and work?

Olafur Eliasson: Since 1995, when I established my studio in Berlin, it has slowly expanded to a team of about 60 people: craftsmen, specialised technicians, architects, artists, geometers, archivists, art historians, two cooks, and administrators. They work with me on experiments with materials and phenomena, and help to develop, produce, and install artworks and exhibitions. I also have a team that concentrates on archiving, communicating with the press, and contextualising my work. We’ve produced a series of in-house publications, Take Your Time, and a series of events called Life is Space, which I periodically host at my studio and which feature experiments, presentations, discussions, and talks by a wide range of guests from many fields.

Silvia Bertolotti: Let’s talk about “Little Sun”, which is your last work, also presented during the Olympic Games this year. How did you get the idea for creating this project?

Olafur Eliasson I first began discussing ideas for Little Sun two years ago together with my friend Frederik Ottesen, a Danish engineer and strong believer in sustainable technology. He was working on a solar plane at the time, and I was peripherally involved in its design. We were tossing ideas around, speaking about light and energy access. It fascinates me that light has such an evident functional and aesthetic impact on our lives. It determines what we do and how we do it. Many of my works revolve around light, how daylight and artificial light influence what we see and feel, as in works like Room for one colour (1997), where I lit a white room entirely with yellow, monofrequency lamps that reduce the viewer’s colour spectral range to yellow and black, or Lichtdecke Kandinsky (2006), where the lighting in a gallery of Kandinsky paintings in the Lenbachhaus in Munich was altered to simulate the lighting conditions in various geographical locations at different times, thus exploring how the changing daylight affected visitors’ perceptions of the works.

You could say that I examine light as phenomenon within an art context, showing my experiments in galleries and museums. But for some time now, I have had the urge to work with light in a more ambitious way; to work with it in a way that is integrated into the world. There are 1.6 billion people around the world who have no access to an electrical grid, who rely on expensive and harmful kerosene lanterns for lighting. This is why Frederik and I have developed Little Sun as a solar-powered lamp. What is interesting about solar energy is that it takes something that is for all of us – the sun – and makes it available to each of us. 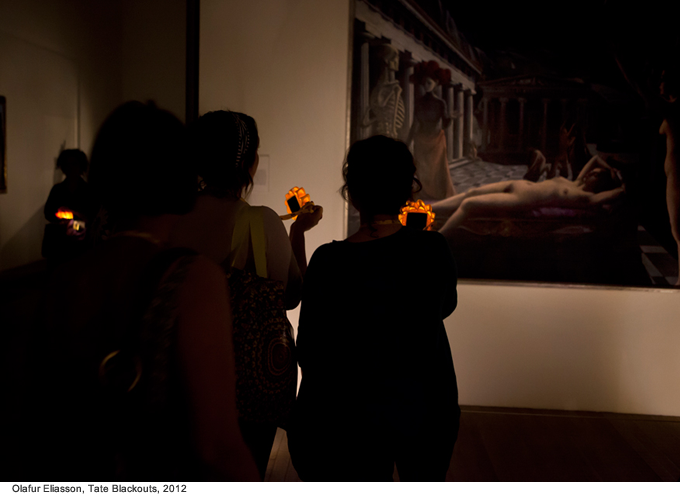 Silvia Bertolotti: I think Little Sun is mostly about the raising of awareness about the energy issues and also about public accessibility to the main source of life: light. But also art. Is that correct? Are we missing other points that you’d like to underline?

Olafur Eliasson: It’s important to mention that Little Sun is a part of a broader campaign to improve energy access and that it is based on a business model that is unlike that of traditional businesses. We aim to drive profit to the point of greatest need by maximising the earnings of people in off-grid communities who will sell the lamps. By creating sustainable businesses in off-grid regions, Little Sun can bring about real change. The way we are doing this is also by appealing to people in areas of the world with ready access to electricity to buy a lamp. By buying Little Sun here, you help make it available for a lower price to people who do not have electricity or who only have inconsistent electrical coverage.