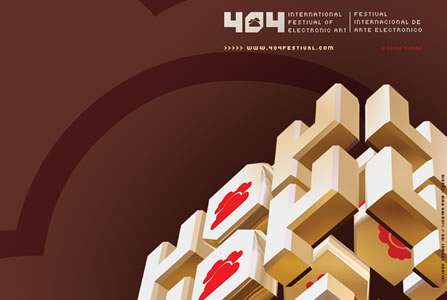 “404” is a independent non profit project whose main goal is to promote and spread artistic productions around the world in field of Electronic Art, creating also a production enviroment in which authors can exhibit their works and interrelate.

Starting from an anual international calling and the subsequent selection of works, “404” supports artists whose proposals are based on originality and research.

In 2005, over 200 works have been selected over a total of 1200 works presented by authors from 46 countries in the following categories: net.art, still image, animation, video, audiovisual set, music, theory, instalations and performances, taking into account that new ways of productions and language constructions always exceed the number of categories.

“404” is an artistic event created by “Astas Romas” located in Rosario (ARG), which is an urban and cultural center with more than one millon inhabitants. This Festival, open to the public and free of charge, is endorsed by cultural organizations from Europe, North America and Latin America.

The “404 Inter national festival of electronic art” will be held in Rosario , Argentina, from November 29th. to December 2nd. in the “Parque de España” and “Patio de la Madera” Cultural Centers.

Through an international open call process, over 200 works were selected over a total of 1200 works recieved from 46 countries in the following categories: net.art, still image, animation, video, audiovisual set, music, theory, performance and instalations.