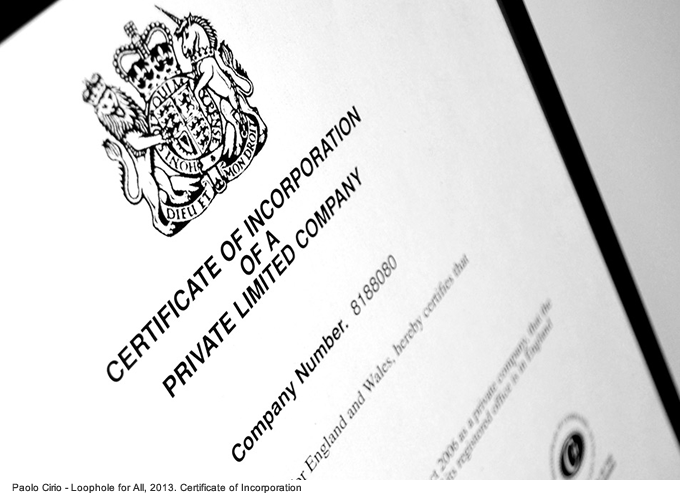 Paolo Cirio, contemporary artist and pirate, hacked the governmental servers of the Cayman Islands and stole a list of all the companies incorporated in the country, making it public for the first time. Now on Loophole4All.com he is selling the identities of those companies at a low cost to democratize the privileges of offshore businesses.

Paolo hijacks the identities of more than 200,000 companies registered in the Cayman Islands by moving their addresses to his Caymans mailbox and issuing counterfeited certificates of incorporation from the Caymans company registry. This massive corporate identity theft benefits from the anonymous nature of those companies since the real owners’ secrecy allows anybody to impersonate them.

In short, this project turns the main feature of offshore centers into a vulnerability. Through Loophole4All.com, anyone can hijack a Caymans company, from 99¢ for a certificate of incorporation for a real company to $49 for a mailbox in the offshore country with mail rerouting. Finally, small businesses and middle class people can invoice from the major offshore centers and avoid unfair taxes, legal responsibility and economic disruption in their own indebted home countries, in a form of global civil disobedience. 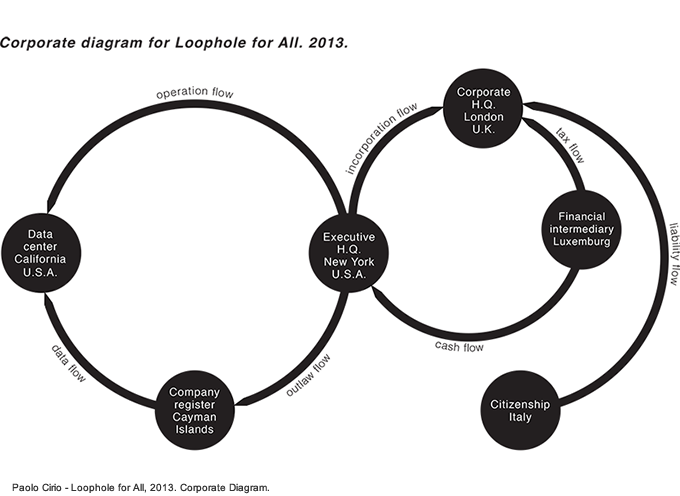 For this operation, the artist set up a company in the City of London as a shield for legal persecution and to compete in the market against offshore centers. He utilizes aggressive business strategies for a political work of art and reverses corporate machination for creative subversive agendas. With the money generated by selling companies’ identities, Paolo plans to expand his business into Bermuda, Jersey, the Seychelles, and Delaware, among others. Further, Paolo Cirio interviewed major experts and produced a video documentary investigating offshore centers, where he shares his extensive research and conclusions about offshore business: http://Loophole4all.com/doc.php

In the offline art installation, the paper trail of the project is displayed with prints of the documents of the scheme set up for the operation. Ultimately, the installation will be a low cost identity shop for offshore companies, and in doing so democratize both offshore business and the sale of subversive works of conceptual art. 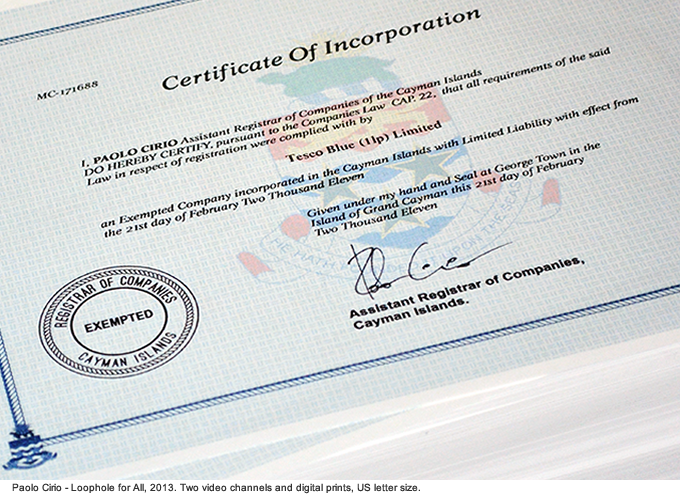 – The Cayman Islands are second only after Switzerland in the global Financial Secrecy Index.

– The Caymans state is considered to be one of the major offshore centers for high finance and the global economy.

– Among the several thousand anonymous companies in the Caymans you will find most of the major global multinationals, Chinese businesses,
criminal organizations and all the major global banks.

– There is neither real money in the Caymans nor a real market. Caymans companies are only booked on paper.

– The Cayman Islands is a British crown colony situated 150 miles south of Cuba in the Caribbean Sea.