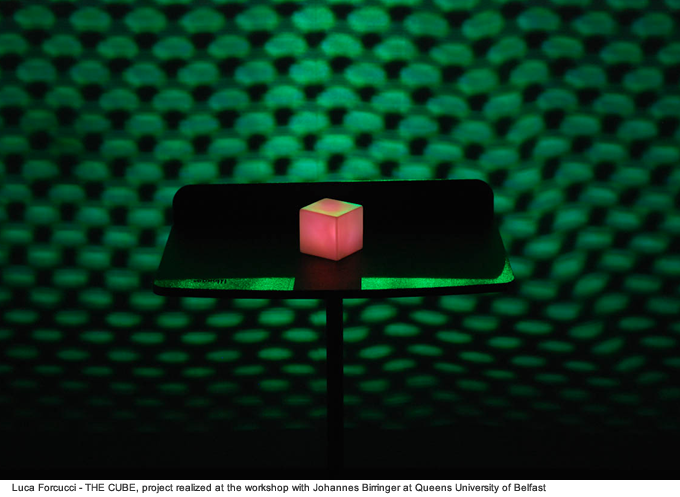 Johannes Birringer is a German-born performance and media choreographer and artistic director of AlienNation Co., a Houston-based multimedia ensemble that has collaborated on numerous site-specific and cross-cultural performance and installation projects since 1993 (http://www.aliennationcompany.com/).

He has published and edited several journals and his books include Theatre, Theory, Postmodernism (1991), Media and Performance: along the border (1998), Performance on the Edge: Transformations of Culture (2000 and 2005) and Performance, Technology and Science (2008).

He is currently Acting Director of the Centre for Contemporary and Digital Performance at Brunel University (http://people.brunel.ac.uk/dap/condip.html). With the fashion designer Michèle Danjoux he is also co-director of the DAP-Lab, which includes artists and researchers; their production company has produced several new works, such as Suna no Onna (2007) and Ukiyo (2009) (http://people.brunel.ac.uk/dap/). In 2003 he founded the Interaktionslabor Goettelborn in a former Coal Mine in the Saarland, Germany (http://interaktionslabor.de/). It is an annual international workshop dedicated to research, performance and software application development in interactive and networked media technologies. 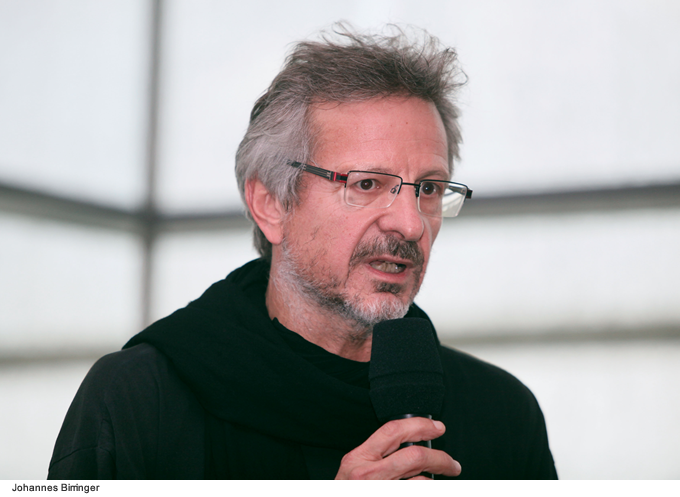 This summer I had the opportunity to participate in the Lab and in the final vernissage, so I took the chance to ask Johannes more about the history of this event and about his current research inside DAP-Lab.

The history of the Interaktionslabor: philosophy, process and evolution

Vanessa Michelion: Could you introduce the Lab and explain how everything started ten years ago?

Johannes Birringer: The Interaktionslabor has a basic philosophy: to invite artists to live on the grounds of a historical industrial site, a coal mine which closed in the beginning of the XX century. Our regional government had a plan and brought in an agency to oversee the closing of the mine and its reopening as a space, a campus for possibly attracting new companies, new businesses. In 2003 I persuaded them to let me come here and hold an artistic laboratory dedicated to new technologies and performing arts. Since the beginning we had an enormous amount of interest from people from Europe, but also Latin America, USA, Canada and Hong Kong.

Vanessa Michelion: Artists from very different backgrounds and disciplines usually participate in the lab. How are the daily activities organized?

Johannes Birringer: Whenever we start the lab we explore the landscape and do a field trip into the coal mine, while inside the buildings the group attempts to come up with new ideas about possible relationships between visual arts, performing arts and new technological art.

The rhythm of the work is interesting because during the day it is physical, explorative, both individual and collective. In the evening we do rehearsals with the media objects we have produced and we test possibilities of making digital transformations or re-compositions and also we can learn about how interactivity can work in interesting ways for the performers or for the potential audience. The process is very collective, we teach each other, it’s a peer to peer, democratic and horizontal workshop, a form of self-education. 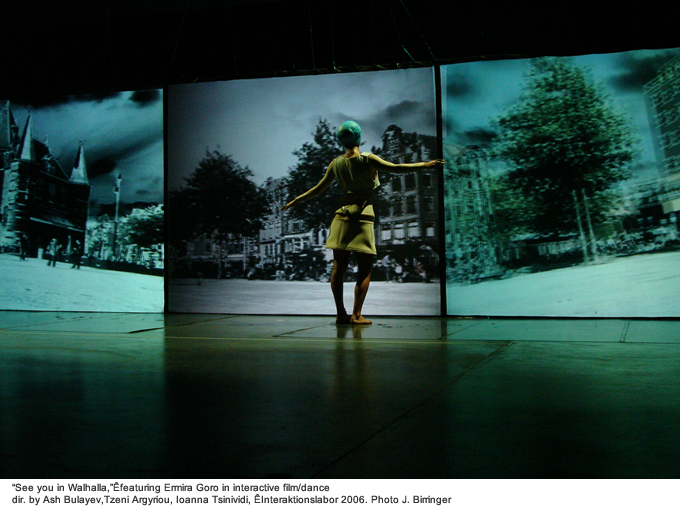 Vanessa Michelion: How did the Interaktionslabor evolve during the years?

Johannes Birringer: When we called it “Interaktionslabor” it was meant to attract ideas on new interactive programming and interface design. It emphasized the interaction between old and new art forms but it especially looked into the three major modes of multimedia performance: sound and electronic music, film, video and photography, as well as interactive and movement capture software to create interfaces.

This basic philosophy has stayed but the relationship with the historical site has changed: at the moment we spend more time inside, whereas in the first years we spent more time outside and then inside we just recomposed the site-specific works done outside.

Furthermore, people in the years have grown younger and now many students and young professionals take part in the workshop. On the contrary, when I started ten years ago a lot of the artists who came where of my generation, people in their thirties, forties and fifties, who already had substantial expertise in music, film, architecture, performing arts and software technologies. 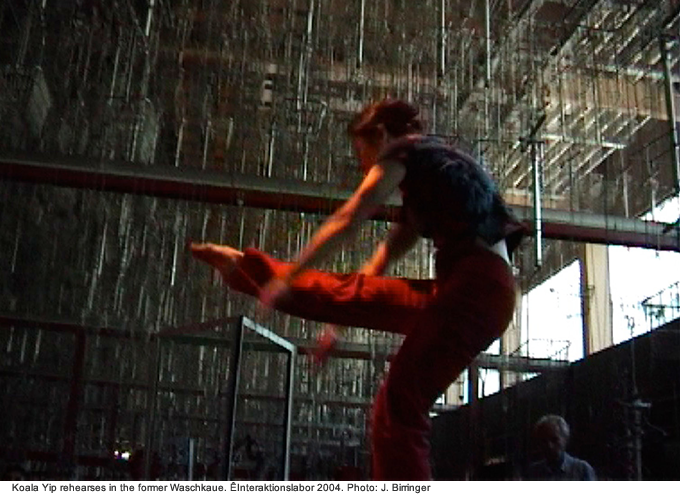 Vanessa Michelion: You are working on a manifesto on interactive art, also based on the experiences developed in this workshop through the years. Could you anticipate some ideas?

Johannes Birringer: The term “interaction” means two things for me. In the first case, I think about interaction between people and with the environment: for example when we are here we are affected by the ecological, the natural environment which embeds the residual, decaying industrial buildings or architectures.

The second meaning is computation-based interactivity: we are trying to design interfaces between human performers, human agents and the software system or a programmable environment.

As we were working here in the first years the director of the agency, who is an engineer, would come and watch us working. Very often we would be asked what exactly is interactivity, what is it good for and what does it do that you cannot do in terms of traditional composition or working in multimedia theatre and performance. So we asked ourselves these questions: “what is innovative about interactive design?” or “how is it productive to generate new possibilities?”, “how is interactivity connected to real time processes?” and “how can we formulate a philosophical manifesto that pronounces very clearly what we think interactivity could be?”. Since 2009 we have being trying to write this manifesto and this is not yet completed because we cannot agree in the dialogues that we have among colleagues, artists and my local volunteer team. This manifesto now has hundred pages and we hope to finish it and release it soon online.

For me it is quite amusing because manifestos used to be written by avant-garde artists, such as surrealists and futurists, but it is not so common anymore… 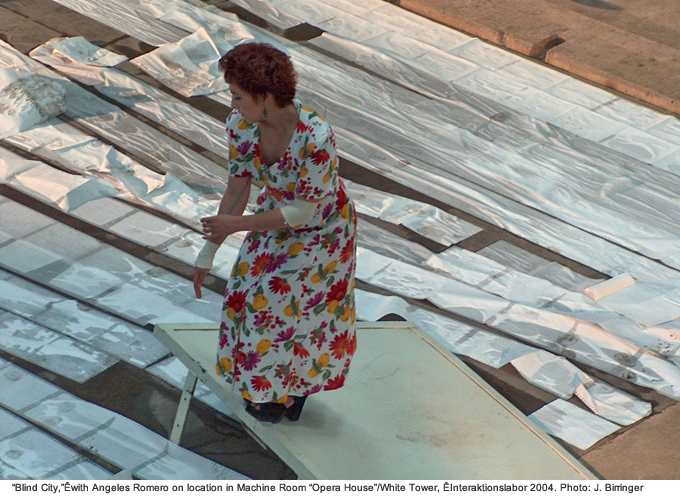 Research and production at DAP Lab

Vanessa Michelion: You have being dealing with multimedia and interactive performance for more than 20 years. Which ideas are you working on at the moment?

Johannes Birringer: I personally don’t believe anymore in interactivity being aesthetically important. I think it was a temporal affair where through the computational possibilities we became interested in real time improvisation as well as in relations that we could set up for the audience for them to act out or engage like in a game, but for me games are not that interesting and I also feel that participatory art is often very limiting, controlled and restrictive. I’m now very skeptical about interactivity and I don’t use it a lot in my own works, just in a few moments of real time action… I’m more interested now in larger compositional structures that involve hybrid, multiple media and that somehow also emphasize the narrative content that I can share with people. So I think I’m going back to interesting narrative rather than to interesting games, a certain kind of interactive awareness about visual effects, affects or changes in the environment behaviour, although it is true that the way the system affects behaviour is of great humanistic, psychological and scientific interest.

If we are dealing with new technologies I think it is important not only to work on design or interactive interfaces but also to interrogate why and how we are working with these powerful technologies that sometimes are very simplistic, in terms of control functions or cause-effect relationships, and other times are still mysterious. 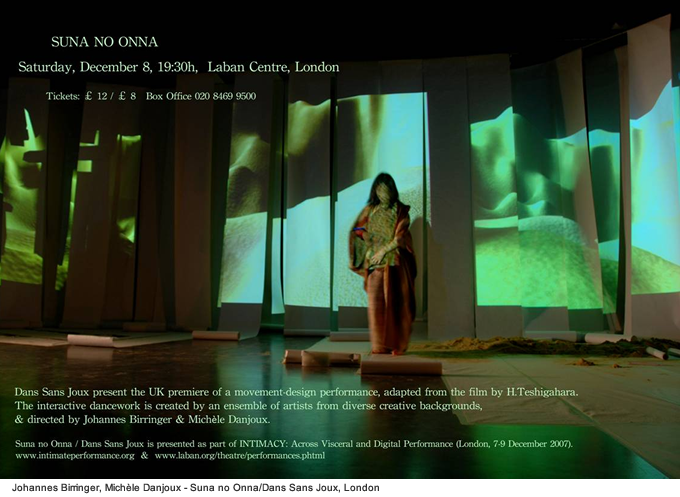 Vanessa Michelion: Together with Michèle Danjoux, you are devising new ways to incorporate wearable technologies into performance. Which research topics are you especially addressing?

Johannes Birringer: In the Design and Performance Lab (DAP-Lab) we have specialized in wearable technologies, body worn technologies that can be used by performers. Wearable Design lies at the intersection of several fields: performance, dance, fashion, design and computer engineering. This came to be because of my collaboration with Michèle who originally is a fashion designer. In our research we are particularly interested in costumes that incorporate small sensors, accelerometers, touch and bend sensors that respond to movements, heat and photo sensors; we are also working with small microphones and speakers that can emit sound from the body. In the last two years Michèle and I became interested in the sound of costumes and the sounding of the wearable technologies as well as in how the sound influences the choreography or the movement behaviour, the tactile or intimate dimension of what we wear.

What we build is usually tested in the lab and then brought on stage in a performance where we create a narrative around a theme or area of interest. Two years ago we combined DAP-Lab and Interaktionslabor for the first time, and Michèle developed two “wrist-speakers” worn by a dancer, Sosana Marcelino, on both the left and right wrist. We then asked Sosana to create a character (using her voice) to have dialogue with the small speakers which were connected to microcircuits built by engineer John Richards who came to the Interaktionslabor with his expertise in “dirty electronics.” John also devised a copper strip attached to the floor, allowing the dancer to use her feet to generate deeper frequency sounds. 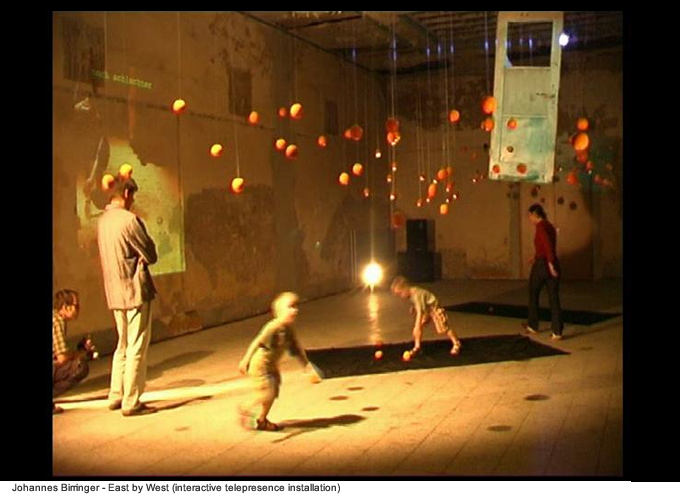 Vanessa Michelion: You are planning to show the results of your current research in a new production next spring. Could you introduce the performance’s main concept?

Johannes Birringer: Our current production, titled “for the time being,” involves historical research on the early part of the Russian avant-garde, the Russian constructivism and the time of the revolution in 1917. We found an early XX century opera which was performed once in Saint Petersburg and it was called Victory over the Sun, itself a collaboration by several very interesting artists, including Malevich and Khlebnikov. Furthemore, some fascinating abstract designs were later developed for the characters in this opera, by El Lisstzky, in the 1920s, which inspired Michèle and our graphics projection designer, Cameron McKirdy.

We are trying to create a new version of the opera, where music and sound are created through the costumes, depending on how people move with the wearable objects and move also alongside the kinetic graphic projections we are developing. But the sound is coming out of the clothes and body prostheses. We are also interested in the theme of energy: the second part of the dance opera, after the sun is captured or eclipsed, will initially be completely in the dark and we want to work with solar panels and light generated through renewable energy, which will be once again controlled through the movement.