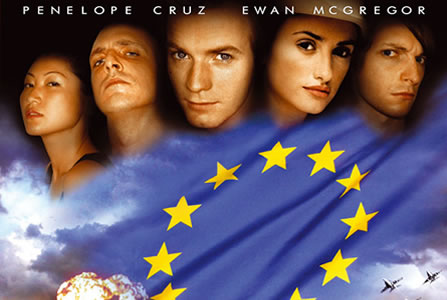 Postmasters Gallery is pleased to announce the exhibition United We Stand, a new project (a media performance and urban installation) by 0100101110101101.ORG (Eva and Franco Mattes) and their first solo show in New York. “United We Stand. Europe has a mission” is the title of the non-existent, fully EU-produced Hollywood-style blockbuster: “A brilliant mix of espionage and sci-fi political stereotypes in which Europe, not the US, saves the world from impending doom”.

The project that convincingly invents and promotes this movie is disseminated into public spaces and media realm all over the world through city-scale urban installations and viral communication tactics.

The streets of Berlin, Brussels, Barcelona and, now, New York have been plastered with thousands of posters perfectly mimicking the iconography and the rhetoric of Hollywood-style visual propaganda. This is the first stage of a long-term communication strategy that began in late 2005 and will gradually cover the whole media spectrum from blogs to magazines and TV. Full page United We Stand ads have been spotted all over Europe, in magazines devoted to art, youth culture and life styles. More are to come.

While the the advertising campaign exists publicly, it is simultaneously presented (revealed) as as an artwork of 0100101110101101.ORG. Postmasters Gallery will be the first art venue to host the disclosed side of the United We Stand project. The light boxes and a billboard with the movie poster, a comprehensive collection of photographs of the United We Stand campaign so far, including urban installations in key locations of Berlin, Brussels, Barcelona and New York, the website devoted to the film, and framed magazines with the ads, will all be on view. The gallery exhibition will also feature a site specific “bridge” installation with live images from a hidden webcam capturing the passerbys reactions to the poster. =ABWe are working simultaneously on this double track, the fictional and the real – explains Franco Mattes –  in this sense, spectators in the gallery who are aware of the multiple layers are passive voyeurs, while the unaware public, is actually a part of the artwork=BB.