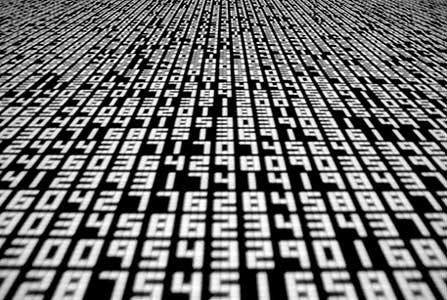 Yamaguchi Center for Arts and Media (YCAM) presents the new commissioned work of Ryoji Ikeda, the new installations datamatics. Japan’s leading electronic composer/artist, Ryoji Ikeda, focuses on the minutiae of ultrasonics, frequencies and the essential characteristics of sound itself. His work exploits sound’s physical property, its causality with human perception and mathematical dianoia as music, time and space. Using computer and digital technology to the utmost limit, Ikeda has been developing particular “microscopic” methods for sound engineering and composition.

datamatics [ver 2.0] is the new, full–length version of Ryoji Ikeda’s acclaimed audiovisual concert. Ikeda has significantly developed the earlier version of this piece (premiered in March 2006), adding a newly commissioned second part. Driven by the primary principles of datamatics, but objectively deconstructing its original elements – sound, visuals and even source codes – this new work creates a kind of meta–datamatics. Ikeda employs real–time programme computations and data scanning to create an extended new sequence that is a further abstraction of the original work.

data.tron is an audiovisual installation, where each single pixel of visual image is strictly calculated by mathematical principle, composed from a combination of pure mathematics and the vast sea of data present in the world. These images are projected onto a large screen, heightening and intensifying the viewer’s perception and total immersion within the work 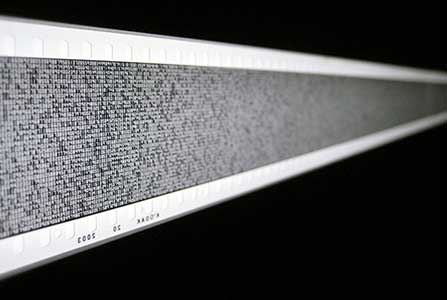 A sculptural wall installation, data.film consists of a series of 35mm film mounted in a light box. The image on the film is constructed from microscopically printed data codes and patterns from pure digital sources, while the unusual proportions of the light box (4 cm high, 10 metres wide, 4 cm deep) create a long, narrow strip of film. Only upon close examination by the viewer can the film and its contents be recognised.

Ryoji Ikeda’s new project test pattern is interrelated with his datamatics project. test pattern is a system to convert any kind of data (text, sounds, photos and movies) into barcode patterns and binary patterns of 0s and 1s. Through its application, the project’s aim is to examine the relationship between critical points of device performance and threshold of human perception.

The installation comprises 8 computer monitors and 16 loudspeakers aligned on the floor in a dark space. The 8 rectangular surfaces of the screens flicker intensely with black and white images, floating and convulsing in the darkness. 16-channel sound signals are mapped as a grid matrix, passing and slicing the space sharply. Via a real-time computer program, the signal patterns are converted into 8 barcode patterns, which are tightly synchronized. The velocity of the moving images is ultrafast, some hundreds of frames per second at certain points, providing a performance test for the devices and a response test for visitors’ perceptions.

Venue: Yamaguchi Center for Arts and Media (YCAM) Studio A

Produced by Yamaguchi Center for Arts and Media