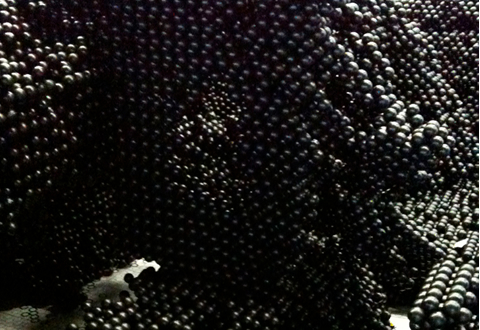 Created from 420,000 black spheres precisely milled and assembled by robotic machines, the 50-feet long by 20-feet high sculpture, Geometric Death Frequency—141, will fill MASS MoCA’s entrance courtyard with a fragmented wave seemingly caught between movement and stasis. An opening reception with the artist will be held at MASS MoCA, Saturday, October 23 from 2-4pm.

Architecture critic and curator Jeff Kipnis calls Diaz’s work “re-origination,” comparing it to the making of a book into a film. In one sense the film represents the book, yet does so in an entirely new medium, and through this becomes something completely different. In the case of Geometric Death Frequency—141, the “book” is a digital photograph of the museum’s clocktower entry courtyard as taken by the artist, which the artist then transforms into pure data, and modulates using analytical and fluid dynamic modeling techniques, finally rendering the data stream into a three-dimensional sculpture using state-of-the-art computer-aided manufacturing methodologies.

Visually, Geometric Death Frequency—141 combines Diaz’s interest in the built environment, deep natural forces such as cellular growth, physics and fluid dynamics to create a massive wave confined within an invisible 50 by 20-foot tank that penetrates the wall of MASS MoCA’s lobby from the exterior of the museum’s main entrance courtyard. As the wave hits imaginary boundaries, it splashes back and up as high as the second storey galleries of the museum.

MASS MoCA’s courtyard, where the natural elements of Natalie Jeremijenko’s Tree Logic and a mature blaze maple specimen tree are presented within the industrial confines of MASS MoCA’s architecture, provides an ideal ground for Díaz’s site-specific creation in which a lifeless, manmade vehicle transforms data into a tangible, material creation (the sculpture). 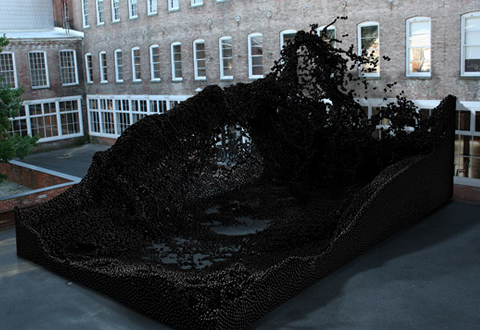 Since the early 1990s, Federico Díaz has focused on art which combines software generated shapes and sound with work in space. Multimedia installations and realizations related to biomorphic architecture and site-specific projects are central to his domain, and he commonly engages audiences through active participation in his art.

His interactive works have been included in international exhibitions at institutions including: Royal Institute of British Architects, Algorithmic Revolution at the ZKM Center for Art and Media in Karlsruhe, Germany, Fondation Electricité de France, and Ars Electronica Festival in Linz, Austria. In 2001, he received the Milano Europe, Futuro Presente 2001 special award for his engaging Generatrix, which featured a generated organism reacting to movements of viewers in the gallery. His work, A Sembion, an interactive space filled with forms created on the basis of a syntactical analysis of words, has also been shown at the Institute of Contemporary Arts/ICA in London.

Díaz’s works are included in the permanent collection of the ZKM Media Museum and he is the honored recipient of numerous awards. In 2005, Díaz presented a visual installation Sakura at the Ars Electronica Festival in Linz, Austria and the Mori Art Museum in Tokyo. At the Florence Biennale Federico Díaz was awarded the 2007 Premio Internazionale “Lorenzo il Magnifico” in the new media category for the Sakura project. In the U.S., Díaz’s installation Ultra was the first presented in 2008 for the MOMA/PS.1 exhibition at Art Basel Miami Beach.

Federico Díaz lives in Prague and is a co-founder of the Supermedia Studio at the Academy of Art, Architecture and Design.

MASS MoCA (Massachusetts Museum of Contemporary Art) is one of the largest and most active centers for contemporary visual and performing arts in the country and is located in North Adams, Massachusetts, on a restored 19th-century factory campus