The embodiment of artistic intents in the plastic and figurative forms of representation has been a dramatic moment in the human history, defined by revolutionary processes to master matter in terms of colors, shapes, materials and techniques. The evolution of visual arts had a strong impact on the achievements of new processes to represent and interpret the reality in which the artist was immersed, by creating new artistic languages capable of manifesting increasingly abstract and conceptual contents.

Technique (and further technology) has been a constant presence in this historical line: adiversity in to ols together with an awarenessof conceptualization were defining developments of new movements, new visions, new utopias. What if the proliferation of technology together with the understanding of science generated a profounds witch in previously held conceptions of society? What will be the role of the artist in this situation?How to create a dialogue that can some how overtake this relation? Where do the lines between science, technology and art intersect,or even completely blur?

The New Renaissance brought to practitioner sin this contemporary age an enormous availability of scientific and technological knowledge together with a change of perspective, in which cross­ disciplinary discourses are established between specialized fields. Tools previously only considered for particular use by scientists and those labs locked in the academic world, found ways to spreadout. The enlargement of processes of participation by a hacker­ society, requires initiating a new form of art and science. The time of vertical expertise is over. 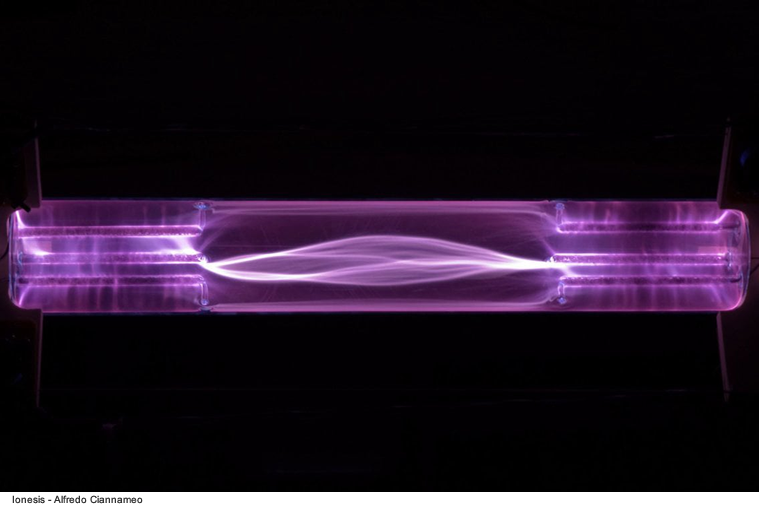 Our destiny as a user­ society is now determined by individuals that share a curiosity for performing new research, guided by their capacity to interfere and modify processes that interact with each other. Deep questions related to the fundamental mechanisms of the universe we live in,  andabsolute abstract models far from our imagination, are now creative territories of visualizations, sonifications, experimentations.

Finding the beauty by looking inside an unfold nature is the manifest of this exhibition. The impossibility to forget what technology and science means to artists nowadays, transposes classical visual concepts such as color, materials, movement and lightin new dimensions of plasmaphysics, fluid dynamics, organic life permanence and temperature´simpact on solidification of materials.

Science is here involved as the source of knowledge open to be artistically interpreted. The only boundary between science and art which is still possible to be discussed in the art and science practice, is connected with decisional process behind the artwork. The traditional idea of scientific experiments addresses ,be sides the verification of principles and theories, personal interpretations on compositional, dramaturgical and emotional level, designed into the audience´s experience by the artist. 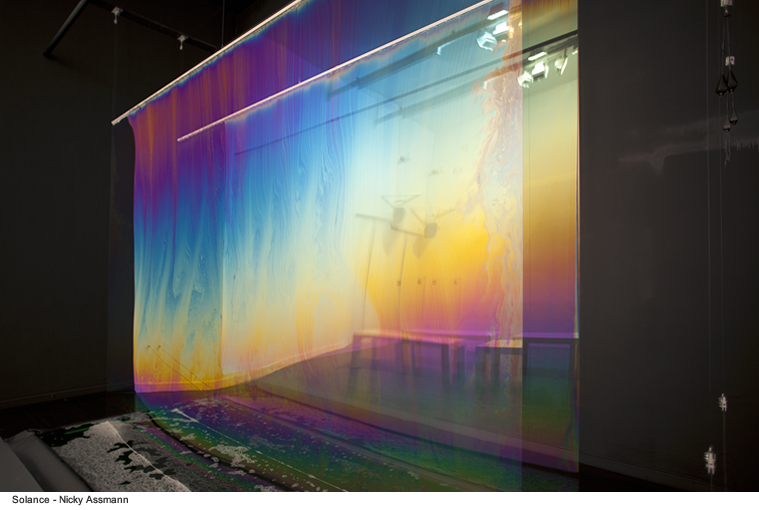 This means that even if every artwork of the exhibition can be considered a scientific observatory on the phenomenon, as well as opening up educational aspects, the rationale behind the way the art work is performe distheresult of combinations between artistic tools and techno­scientific motivations which affect the capacity of communication to an un­specific audience the language of art which is made of composition, proportions and dramaturgy. The four classical states of matter (solid, liquid ,gas and plasma) are the subjects of the artistic works selected for this exhibition, each redefining the relation between phenomenon and observer because of the integration of a new artistic language within the scientific experiment.

The exhibition States of Matter has two main focuses: the wonder about the beauty of the phenomena, based both on classical concepts of the visual tradition and contained in the media exhibited, and a strong educative capacity in which the formal aspects help the audience to intuitively understand the scientific phenomenon and process, rebounding the intimate relation to an inner cosmos impressed in everyone imaginary.

The participating artists have been selected on the basis of their work connecting with thethemesofthe exhibition as expressed in the concept above, each adressing states of matter in different forms and through different media (such as film, visual installation, plasma organ).

In addition, an open call running until 30 April 2016 open supthe process of curating the exhibition, inviting all kinds of contributionsasa form of interaction for people with similar curiosities. In case a suitable project is found through the open call, it will be included in the exhibition, funded through Spektrum.

The exhibition will open on Thursday, 23 June 2016 and run daily from 23­-26 June 2016 between 15:00 ­22:00. In addition, the program will be extended with a Saturday afternoon (25 June, 15:00­18:00) of artist talks and a lecture by Hans­ Jörg Rheinberger, Max Planck Institute for the History of Science, on the interface between the liquid and the solid in scientific research, followed by a discussion with the audience around the topic.

Spektrum is a space of convergence for cultural communities and transdisciplinary groups emerging and operating in and off Berlin. The project aims to bring confrontation,open knowledge and a platforms for idealisation, realisation and presentation of technology ­based artworks, science­ focused events and futuristic utopias based on the principle “do ­it ­together ­with ­others”.