Bio Art and Design in the exhibition “Evolutionaries”

What could food systems, zombies, algorithms, explosives, playful plants, pigs in space and sperm possibly have in common? They are all working material wielded by the present and past winners of the Bio Art & Design (BAD) Award that is celebrating its tenth anniversary this year, and are brought together in the group exhibition Evolutionaries, Bio Art & Design from the Sea to the Soul, on view at MU Hybrid Art House this winter.

Most of these works are the fruit of collaborations between artists and scientists working in the Netherlands and they address an array of topics like the possibility of same-sex biological parents, the colonial origin of zombie stories, and what can be learned from watching a plant play tag with a machine. Bio art and design, as practiced by this talented pool of international artists, take on the vastness of our polluted seas as well as the disquiet of the souls sensitive to the weight of collective injustice. To the well-tuned ear their work cries for revolution and evolution simultaneously.

The twelve international artists or collectives in Evolutionaries include the three winners of the BAD Award 2020. Their winning projects are put in the context of new or recent work from one winner from each of the previous nine years. The results are a thrilling survey of contemporary bio art and design that is capable of showing the creative potential of biotechnology despite the current pandemic, made in video and sound, but also living matter, robotics, and food. The exhibition opened on Friday 11 December, 2020 and will run to Sunday 7 March of next year.

One of the first works that catches the eye upon entering MU is Welcome to the O.F.F.I.C.E. (Other Food Futures Including Cuisine and Ecology) by the Center for Genomic Gastronomy, BAD Award winner of 2011. This is an interactive space where there will be regular performances led by CGG from their home base in Norway. Furthermore, this ‘office’ presents ten years of their research mapping food controversies, prototyping alternative culinary futures, and envisioning more just and ecologically sound food systems.

Related to this is the work of Dasha Tsapenko in collaboration with microbiologist Han Wösten, called Fur_tilize. This project consists of a series of green grown ‘fur’ coats in which Dasha Tsapenko brings together proven principles from agriculture and fashion, mixing and questioning these and then letting them grow in five steps into both food and fashion.

Another work that implicates macro-level systems at work in our society is Michael Sedbon’s CMD: Experiments in Bio-Algorithmic Politics 2.0. This project builds on his winning installation of last year and presents photosynthetic bacterial cultures. These populations participate in reward feedback loops the artist has devised which switch between capitalist and more communal models of resource distribution, controlled by algorithms. Will we, like these cultures, end up more and more suspended in such systems in a dystopian future wherein surveillance machines are continually optimizing and controlling us? Or are we perhaps already there? 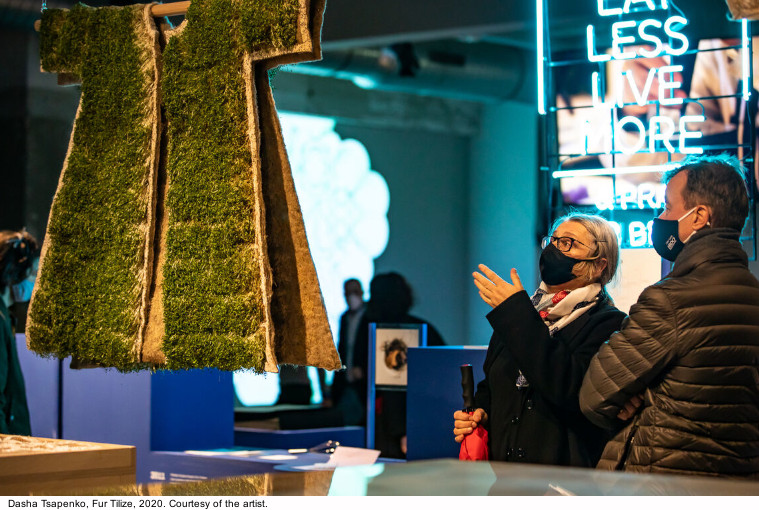 Ani Liu, BAD winner in 2018, presents multiple works that help us question the cultural and scientific discourses that shape our notions of the female body. Two of them are prototype garments for simulating the experiences of incontinence and the pains of childbirth. Another is a performance captured in video titled Mind Controlled Sperm, in which a computer-brain interface is used to allow the designer to control a sample of human spermatozoa.

Artist Charlotte Jarvis, who won the BAD Award in 2012, takes another approach to undermine the p-centric symbolic power of semen with In Posse: she has been working over the last few years to make viable sperm that is her own. Using the latest CRISPR-Cas9 technology combined with a procedure to generate sex cells from her own tissue, the artist has collaborated with Leiden-based scientist Susana Chuva de Sousa Lopes to advance the project and present it around the world. Accompanying it are re-interpretations of the Thesmophoria, the ancient Greek fertility festival to which only women were admitted.

Cecilia Jonsson, who won in 2016 with a project to make an iron compass needle derived from human placentas, now presents the work of micro-organisms collected from a sewage treatment facility in the work Contemporary Diagram – Berlin. These were placed on iron surfaces and exposed to infra- and ultrasound, formulated using the artist’s voice and music by composer Alexandr Mosolov (1900 – 1973), resulting in a variety of corrosion processes and patterns. 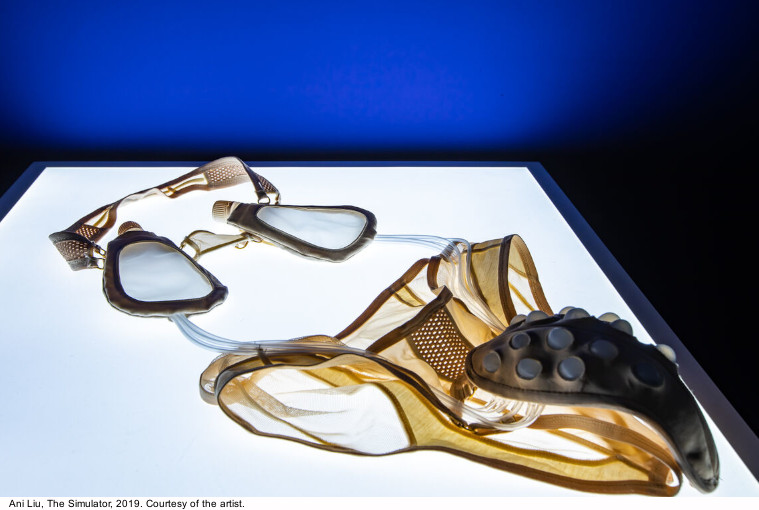 Jalila Essaïdi’s work Double Edged is a multi-layered exploration into the contradictions and tensions arising from the stark realities of the military industrial complex and the legacy of its waste streams. As one of the first winners of the BAD Award in 2010, she developed a bulletproof skin; this time she takes on the ammunition itself. The work highlights a glowing isotope of hydrogen that leaks from munitions dumped into the sea, making a fascinating visual effect while announcing the danger and damage of these munition dumps.

Also venturing below sea level is Ghost Reef by Xandra van der Eijk, a next stage of her BAD Award winning sound exploration Seasynthesis from 2017. Ghost reefs are human debris cold water structures in the North Sea on which a myriad of sea life ecologies have grown. Xandra is especially interested in how we can hear and diversify between these ecologies and in building not only a technical image of the reefs but also a cultural mythology around them.

Sissel Marie Tonn, the second BAD Award winner of 2020 in collaboration with microplastics researcher Heather Leslie and molecular cell biologist Juan Garcia Vallejo, present the work Becoming a Sentinel Species: a video work of science fiction, about a time in the future when humans become ultra-sensitive to microplastics. In this vision of the future the tiny pollutants trigger extreme immune system reactions and unleash cytokines that produce strange and hallucinatory states, such as re-living moments of our waterbased ancestry. The work is in-part a reminder to how entwined we are with the ecosystems we co-create for ourselves. 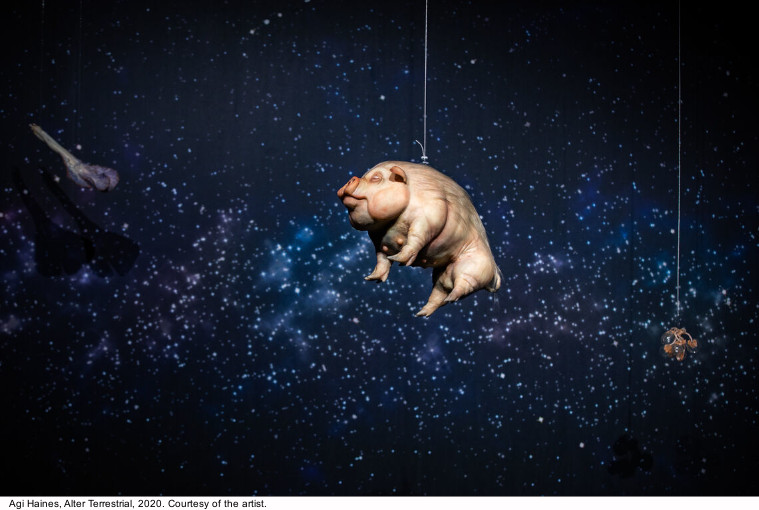 Two other works that touch on alien-ness and otherness are presented by 2015 BAD Award winner Agi Haines and by Nadine Botha. The former is titled Alter-Terrestrial and is about the “adaptive purgatory” species find themselves in when entering or returning from outer space. These exist in a fascinating liminal state, of being neither earthly nor alien as they have been re-designed, in some way, by the extra-terrestrial experience.

Nadine Botha together with her scientific collaborator dermatologist Henry de Vries develops the third BAD Award winning project. It is called The Orders of the Undead, a study of stigma, othering, and viruses read through the phenomenon of zombies as seen in popular culture. Through video fragments cut from film and television, the artist explores the metaphorical power of zombies and the stories told about them, linked to old and new narratives concerning contagion, segregation, and death.

The work of Špela Petrič, BAD winner of 2014, also touches on alternative time scales and meditative states to allow for reflection and greater understanding of a non-human perspective. In PL’AI a climbing cucumber plant is surveilled by a computer that has control over a small moving part which it uses to try to “tag” or touch the plant, but is limited to the speed at which the plant grows. It is therefore challenged to keep predicting where the growth will direct the plant up a trellis. The slow-motion performance resists any firm form or categorization, collapsing difficult questions about nature, culture, and machines into play, where they perhaps have more meaningful ways of finding answers. 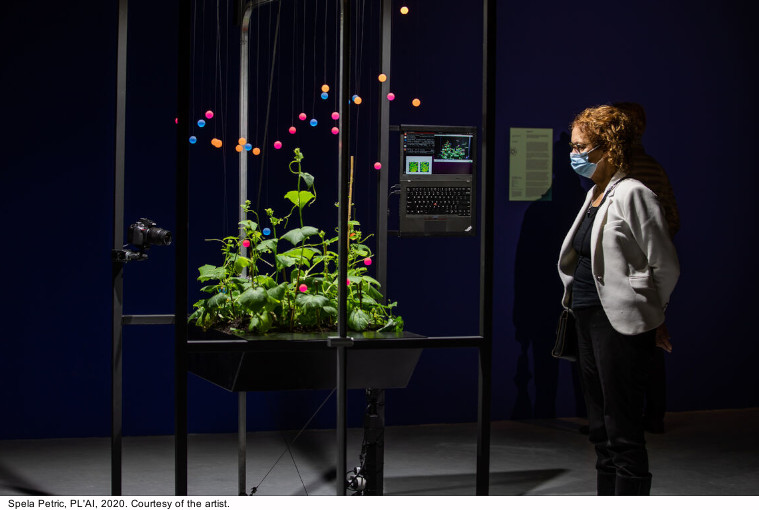 Evolutionaries marks a decade of support of the type of collaborations between the arts and sciences that produce illuminating, provocative, and sometimes innovative outcomes. The BAD Award projects, as ever, go beyond science communication to demonstrate the new aesthetic and often also ethical aspects enabled by discoveries in the life sciences and the applications of biotechnology. They help us to see some of the complex ways in which our shared concepts of nature, identity, culture and all that is living are fluid and in flux.