An approach to the aesthetic dimension of disruptive phenomena in the digital ecosystem. The curatorial project raises an analogy between pandemics in the biological and digital sphere, and how both end up interfering in the dynamics of human activities.

A reflection on how technology has been integrated into contemporary society and it is impossible to consider human and digital as separate entities.

Massive consumption of personal computers began during the 1980s. At that time, MS-DOS was the dominant operating system and Internet was not available for most consumers yet. Files were copied and shared on floppy disks and consisted mainly of application programs or video games. 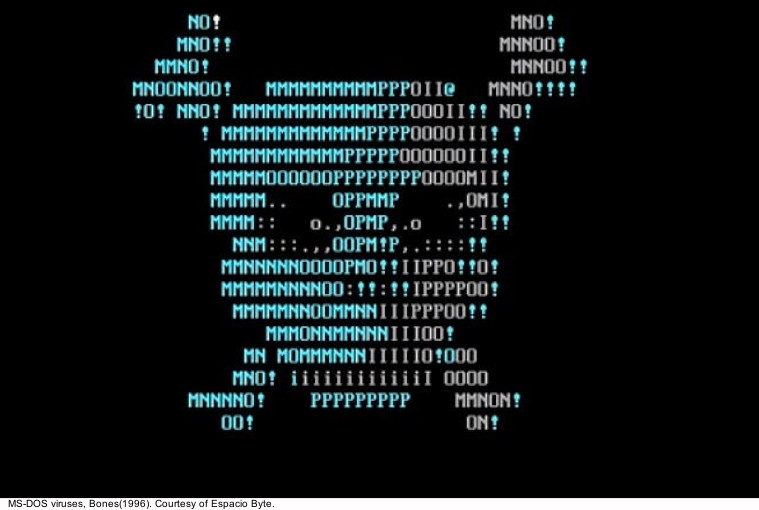 In order to prevent piracy, some software companies created viruses to educate non-legitimate users; they included contact information so those affected could request a cure. In other cases, computer programmers designed viruses that presented no risk to operating systems. Their intentions were to hamper the smooth functioning of the PC, attract victim’s attention by propagating a political or philosophical idea, or -in the worst case- to destroy information.

The first manifestations were mainly technological demonstrations and the motivation behind was based in experimentation, rather than the development of malicious codes. But in short time, new dangerous viruses entered the scene. Their behaviour was similar to that of a biological virus as it rapidly replicated and spread to other networked machines. That is why in 1984, the term “virus” was adopted to refer to them, although there are records of such threats in the 1970s.

The constant sharing of programs between users, caused viruses to reach international dissemination giving birth to antivirus companies. What started as a harmless prank, today represents an international cybersecurity problem, so much so that malware design remains anonymous and clandestine. 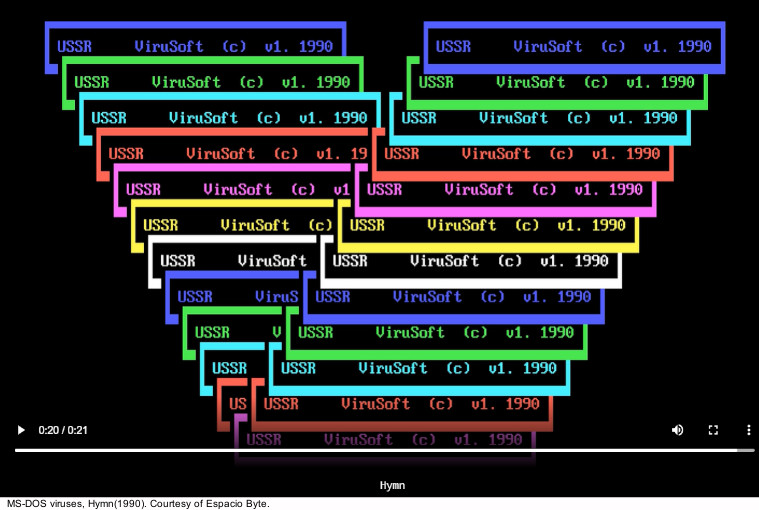 A computer virus is, in short, a small application written to perform certain tasks. In the years of MS-DOS, it was a common practice to replace an executable file .exe or .com with one infected, capable of modifying the originally scheduled instructions. Virus were activated only if a user ran them and their visual appearance was typically based on early video games, made up of pixel graphics, basic animations, rudimentary landscapes, speaker beeps and absurd or challenging messages.

This exhibition brings together a variety of DOS-based viruses. They were captured on video through the use of emulators which allow to appreciate their original presentation, although without their destructive routines. The selection includes viruses that stand out for their creativity and sophistication both in visual and functional aspects; An approach to the aesthetic dimension of disruptive phenomena in digital ecosystems.