The Whitney Museum of American Art is currently presenting Programmed: Rules, Codes and Choreographies in Art, 1965 – 2018, an exhibition featuring 39 artworks, divided into two parts with several thematic groupings that define the curatorial premise for the seemingly diverse range of works presented. In the two general sections, Part 1 was dedicated to “Rule, Instruction, Algorithm”; Part 2 was focused on the “Liberating the Signal”. All the works are the result of rules; mathematical, analytical, and/or algorithmic programming, as well as the processes of digital, linguistic, conceptual or signal sequencing. Co-organized by the Whitney’s Adjunt Curator of Digital Art Christiane Paul, and Carol Mancusi-Ungaro (the Melva Bucksbaum Associate Director for Conservation and Research) the exhibition has been in development since 2016 and will be on view until April 14, 2019.

Programmed takes up the entire sixth floor of the ‘collection gallery’ of the Whitney. It is the museum’s occasion to show works recently acquired, recently restored and works that are rarely seen. Nam June Paik’s monumental Fin de Siecle II (1989), dominates the exhibition’s entry, and was a major restoration effort. Significant collection works from the 1960s feature Josef Albers’ screen prints from his Ten Variants portfolio; computer drawings by Charles Csuri and Joan Truckenbrod; conceptual and structuralist works by Sol LeWitt, Joseph Kosuth and Lawrence Weiner. Artists working in video and new media (in addition to Nam June Paik), include Steina, Jim Campbell, Lynn Hershman-Leeson, W. Bradford Paley, Cory Arcangel and others. The museum’s early history collecting of conceptual art and media art can be seen alongside online contributions commissioned by Artport, the Whitney’s aligned new media agency (initiated by Paul in 2001).

Unexpected Growth by Tamiko Thiel, the newest work in the exhibition, was commissioned by the Whitney Museum specifically for Programmed. An Augmented Reality (AR) work, it is site specific for the Stefan Edlis and Gael Neeson Foundation Outdoor Gallery (the sixth-floor terrace). Accessible from inside the building, from a narrow space where the main gallery opens to the terrace, Thiel extends the controlled interior gallery into the variable outdoors. Unexpected Growth (as hinted in the title) presents a dystopian futuristic scenario envisioning the Whitney terrace underwater (an eventuality according to many environmentalists and prophesized to happen within the lifetime of the youngest museum visitor, by some).

Standing on the museum’s terrace, in full view of the peaceful looking Hudson River to the West, this unsettling scenario is imaginable when seen thru the lens of a smartphone (or tablet). The Whitney has made it easy to facilitate the experience for the (relatively few) non-smartphone wielding audience members: tablets are available in the gallery to view the work through the gallery windows, and a large fixed plasma screen outdoors on the terrace (hard to avoid) provides the AR scenario for curious, passers-by without using a mobile device.

What is AR? Basically, AR is the real-time integration of a live physical scene, viewed thru a smartphone (or tablet) lens, with a superimposed layer (often called a transparent skin) of constructed digital information, accessed via an app from a remote server. Once the app has been downloaded and installed on an AR-enabled device – most newer phones— the experience of AR happens when the viewer sees both the real and the virtual as one visual experience. The active physical area where the augmented information can be accessed is defined, or ‘geofenced’, by GPS coordinates, restricting it as a site-specific experience. 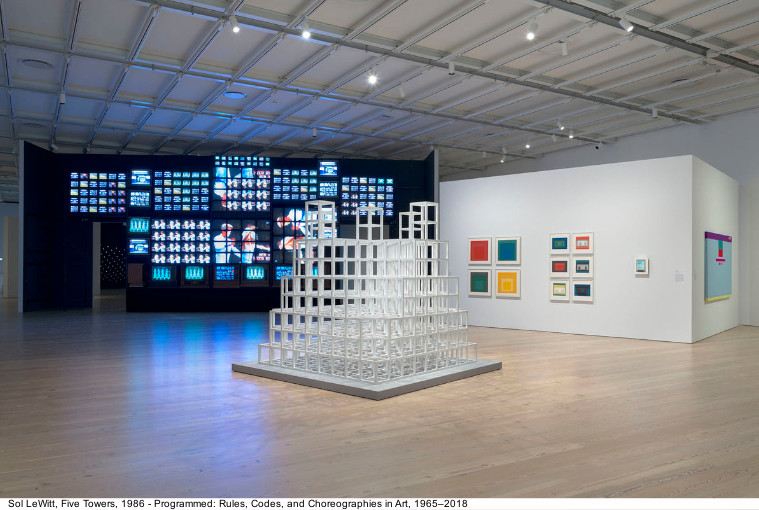 For Unexpected Growth, Thiel and her collaborator “/p” have implemented their own geolocative AR app. As simple as it all sounds, a strong cell service is necessary to access the digital content, so even though the smartphone device gives the viewer the opportunity to observe his/her surrounding as an AR facilitated environment in different, self-directed ways, poor connectivity can inhibit the experience.

AR combines several skills that utilize artistic knowledge: video, interactive art, and 3D digital imagery all contribute. What makes the AR experience ‘art’ is the understanding of how the real is affected by the constructed AR information (what it says to the viewer). This process is termed ‘computer vision’, and is the knowledge, of how our brain understands the physical world and how the user accepts additional layers of data. How that 3D data affects a physical response is the artist’s challenge. What is being observed –in reality– together with the visual narrative created by the artist, becomes the work of art.

When observing Unexpected Growth, one sees beautifully rendered coral reefs (with accompanying underwater sounds), a peaceful scene which one would also expect to see colorful schools of fish moving by slowly. But instead, the scenario presented is deceptively full of plastic debris. In place of a healthy ecosystem, we see recognizable non-biodegradable pollutants slowly floating by instead. They include teams of submerged rubber ducks, plastic flip flops, sippy straws and more. Throughout the day, the brightly colorful scenario slowly fades, finally becoming a scene completelybleached of color, further emphasizing the destruction of the ocean environment and endangered coral reefs (meanwhile, in reality, the Whitney terrace remains unaffected).

Unexpected Growth is a fascinating and user-friendly experience even though it is a chilling preview of ‘things to come’. A clear environmental declaration, and like many of the newer media works on view in Programmed, it brings socially significant issues to the attention of the contemporary art audience. New media (which often utilizes some form of Internet) has proven itself to be the hope for the future, the conscience of those who identify with the media generation, and Tamiko Thiel is no stranger to the political position this platform affords. 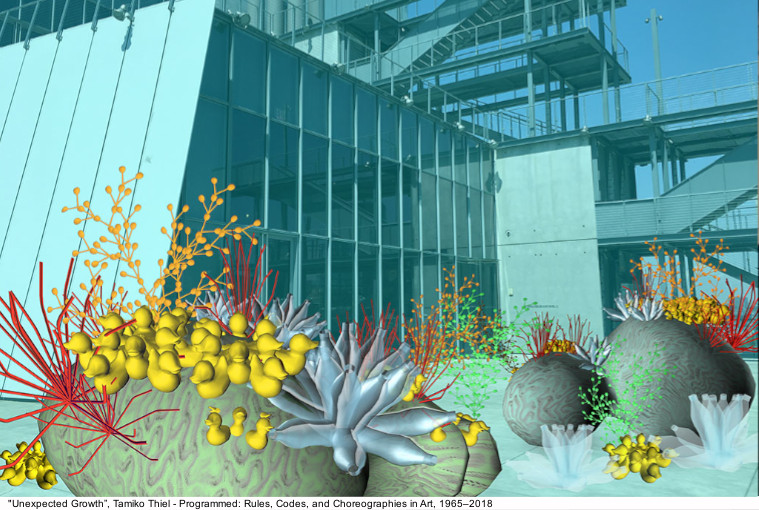 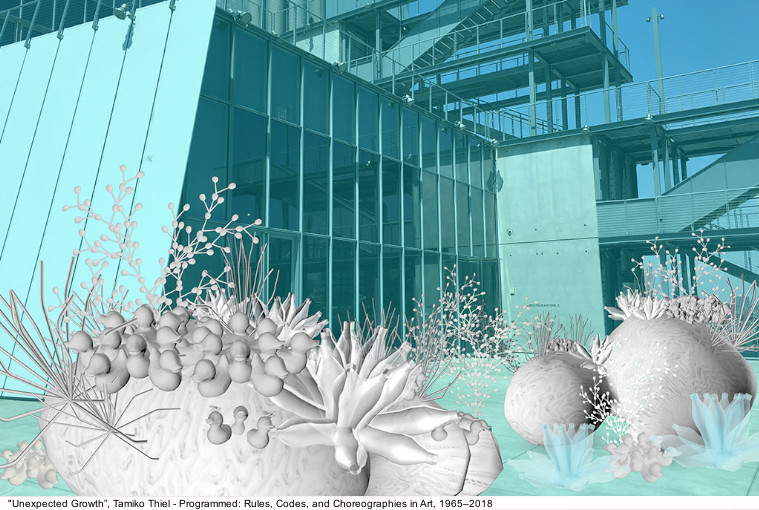 An early artist to work with 3D online, Thiel was selected to be shown in the first edition of VRML Art (1998), a 3D online exhibition initiative that I co-organized with Karel Dudesek for the Van Gogh TV domain. The next VRML-ART edition (eventually renamed Web3D Art, and online until 2004) was presented at the SIGGRAPH VRML 1999 conference in Paderborn, Germany, where Tamiko Thiel participated in the exhibition and all the activities that were organized to promote artists. Thiel’s early online VR work was a hint of her first major VR interactive installation, shown in the SIGGRAPH Art Gallery (2001) in Los Angeles: Beyond Manzanar, (2000), with Zara Houshmand, an Iranian-American writer.

Although this work was never online (primarily because the artists wanted it shown as a life-sized immersive projection) it was a work that explored the now-regrettable incarceration of 100,000+ Japanese-American citizens and residents of the West Coast during WWII. The work allowed one to explore and experience the camp in depth, including personal family histories, dreams, and memories, all with the political responsibility not usually found in digital or VR art at the time.

This installation was shown in the exhibition Lab3D (2003) at Cornerhouse (Manchester, UK). Thiel’s VR work continued with the historically important Virtuelle Mauer/ReConstructing the [Berlin] Wall (2008), co-authored with Teresa Reuter. About the navigation and content of this work, Thiel says it was created “in order to understand how the Wall’s presence and the constant possibility of escape attempts influenced everyday life for residents.”

Thiel moved into AR, her current chosen platform, around 2010, and a quick look at her online CV shows that she has accomplished at least 28 distinct AR works since her first public AR intervention, ARt Critic Face Matrix (2010/2011) at MoMA, NY. This guerrilla action was something that MoMA brilliantly turned into a positive PR moment, welcoming the intervention. 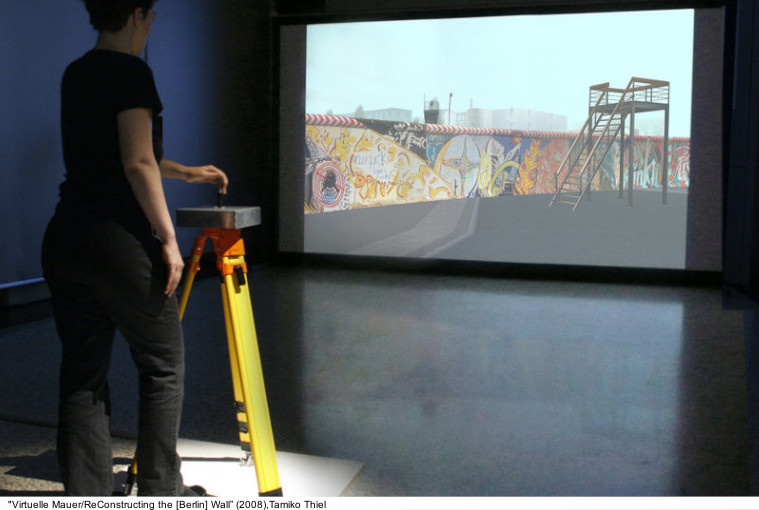 Not all institutions were so generous accepting artistic AR interventions. Along with the growing number of Smartphone-wielding museum visitors, obnoxiously snapping selfies in front of artworks, AR was considered a nuisance by many institutions, such as the Venice Biennial, where Manifest.AR at the 2011 Biennial was regarded as one of many interventions seen as attacking the art on view. The constantly improving developments in mobile technology, and user’s growing familiarity with their devices, AR has become a less frightening medium. Today AR interventions are often more welcome than despised.

The saturation of mobile technology, especially among young people, gives this emerging genre a potentially new audience. It might appeal to those with diminished attention spans who might not be likely to spend a lot of time in an art museum (hopefully digital art and music will serve to attract new audiences with diverse content). AR is a known, and growing game platform, first made popular by the internationally once-hip-to-play Pokémon, as the press entourage was informed by Christiane Paul during the exhibition walk-through. Originally released for the now obsolete Game Boy, Pokémon celebrated its 10thanniversary in 2006.

The downside of AR remains the fact that the digitally layered material needs to be a very low polygon resolution, which is the opposite of current 4D-HD resolution hyped on most new Smartphone models. In addition, the GPS signal necessary to triangulate the transfer of data can be unstable and somewhat erratic, and that means it can give variable location information to the digital imagery, resulting in the AR not always being pinpointed, or exactly accurate. But, if the viewer understands the parameters of AR and can tolerate its flaws, the medium has the chance to become a useful platform for progressive artists to use. It is already established and used widely in museum education curricula, safety and industrial training programs, in addition to the game industry.

It is appropriate to reference the recent MoMA exhibition, Thinking Machines: Art and Design in the Computer Age, 1959-1989’ (13 November 2017 – 8 April 2018), and how it indirectly connects with the Whitney Museum’s Programmed exhibition. MoMA presented over 100 objects and works from the museum’s collection of early computers and ‘obsolete technology’, to trace the evolution of computational thinking. It displayed superbly-designed hardware – alongside some pioneering artist’s works, including Stan VanDerBeek, John Cage, Vera Molnár, and Charles Csuri. 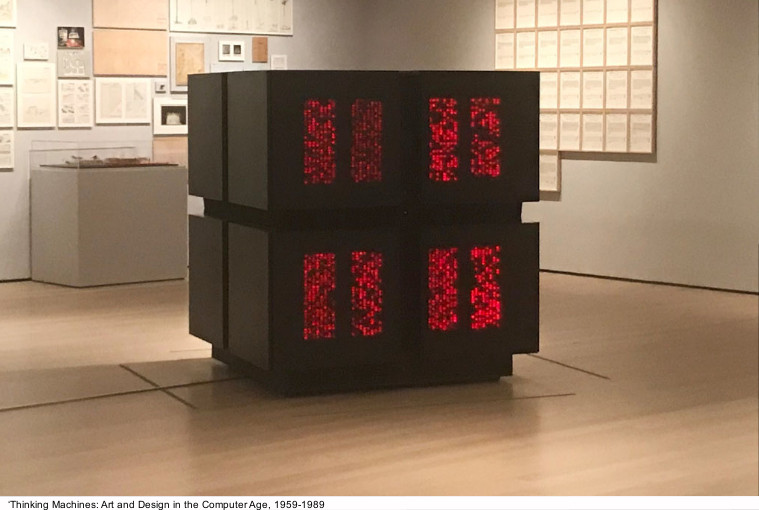 This exhibition was the first effort on the part of MoMA to update their position on digital art and technology since their 1968 exhibition The Machine, As Seen at the End of the Mechanical Age, curated by Pontus Hultén. MoMA’s 2017 acquisition of CM-2, the first commercial AI supercomputer, modeled after the human brain, headlined the exhibition PR for Thinking Machines, which connects directly with Tamiko Thiel.

Thiel grew up in Seattle, Washington, and received an M.S. degree in Mechanical Engineering (1983) from MIT where she was friends with fellow students at the MIT Artificial Intelligence Lab led by Marvin Minsky. After graduation, she worked at Danny Hillis‘ MIT Artificial Intelligence Lab start-up, Thinking Machines Corporation, as the lead product designer on the CM-1/CM-2 supercomputers (and is co-inventor on one of the patents for the CM-1). She left this exciting environment and moved to Germany to pursue studio art and received a diploma in Applied Graphics for video installation from the Art Academy in Munich (1991).

Her art education, combined with her engineering background, has informed her work as an artist working in one of the most radically unconventional areas of digital media art: Virtual Reality (VR) and Augmented Reality (AR). These two areas are still among the least understood generally, and most misunderstood by the art world.  What is embraced by and leading the growth of the Mobile Game Industry, AR may hold the key to the future for online mobile art, with a general population that is glued to smartphones.

The commission of Unexpected Growth by Tamiko Thiel, an artist working with AR who typically challenges a world view dictated by rules, continues the Whitney Museum’s practice of supporting artistic exploration of urgent and progressive ideas. With a longstanding focus on artists, the museum has organized courses, exhibitions and publications that present art as activism, including experimental video, new media, and queer art.

In the very near future, and hopefully, before the Whitney is physically submerged by the rising oceans, VR and AR will be fully integrated into the museum collection, with even more prophetic works that continue to break rules. In early 2019, a public program featuring artists in the exhibition will be held (tba), where the audience can interact directly with those who created the works on view in Programmed.